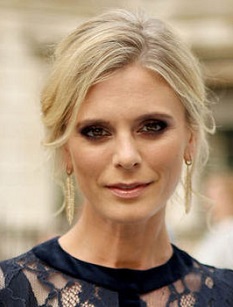 Being born to the dynasty of celebrities, Emilia had her fate sealed from the very childhood – in her home she was surrounded by popular stars and became interested in show-business at an early age. What pictures has Emilia Fox been cast of? Let’s know!

Emilia Fox' birthplace is London. She was raised in the family of Joanna David and Edward Fox – both her parents were actors. Besides, other Fox' relatives are also involved in the world of showbusiness – it is a real dynasty of entertainers. So, her cousin Laurence and Jack are prominent TV hosts.

1995 is thought to be the beginning of Fox' TV career – she played in the TV picture entitled Pride and Prejudice. 1997 was marked by her appearance in Rebecca.

The following year, she acted in The Round Tower - her character was a rich girl who gets pregnant and leaves her parents to start an adult life.

The year 2000 brought her a role in Randall and Hopkirk. In 2002 fans could see Emilia playing a girl pursuing her dream of becoming a professional musician in The Pianist. In 2003 she added the historical picture about King Henry VIII to the list of projects she has appeared in.

The following year, Fox was among actors of the movie entitled Silent Witness – she co-starred there alongside Tom Ward. She continues working there even today. The same year, she got the role in Gunpowder, Treason and Plot. Later, he appeared in the TV series broadcasted on the BBC entitled The Virgin Queen. Remarkably, initially, series' directors planned Fox to be a secondary character acting only in a couple of episodes. However, having noted her talent, they changed the scenario and made her a constant actress. Around that time

In 2008 Emilia gave her voice to a character of the animated movie Free Jimmy. 2009 was marked by her playing in the TV series named Merlin (co-starring alongside Katie McGrath) and in the picture The Queen.

Speaking about Fox' most recent works, she started playing in the drama movie entitled Delicious in 2016 and left the cast in 2018.

In 2015 she took part in Bear Grylls’ show Mission Survive and began starring in Celebrity Juice.

Emilia Fox’ net worth is evaluated at $5 million. She spends a significant part of her earnings on charity.

As for Emilia Fox' private life, she has a long list of relationships. So, 2000 is the year of her engagement with Vic Reeves, a TV star and comic. Having parted ways with the partner, Fox became romantically involved with Toby Mott – however, their affair also ended in separating.

Five years later, Emilia and her new boyfriend Jared Harris tied the knot. In 2009 the two officially divorced. According to the former spouses, they split up because their relationship was long-distance one, they could see each other only several days a month. Moreover, in 2007, Fox got through a miscarriage, which also influenced their alliance.

Then, Emilia Fox was noticed together with Jeremy Gilley (her latest and current partner) – they attended luxurious events together. In spring 2010 the woman announced her pregnancy with their first child – their daughter was given birth in November.

Apart from acting, Fox is involved in social activism. So, she dedicates time to struggle for human rights and cares about our planet.

The woman is a trilingual person. Except for English, she speaks French and German languages.