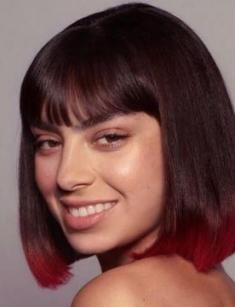 Charli XCX rose to prominence, making her way through difficulties to the stars. She met ungifted managers and faced indifferent listeners. In 2014, her track “Boom Clap” finally topped the charts, and now Charli XCX is one of the most popular young performers.

Charli XCX, Charlotte Emma Aitchison, was born on August 2, 1992, in Cambridge. She is British, although her exotic appearance claims the opposite. The singer inherited the dark shade of her skin from the Indian mother, Shameera, while her father John is Scotch.

Charli XCX's parents are not creative people. The man is an entrepreneur, and his wife is a stewardess. But the girl was interested in music from childhood, dreamed of becoming like Spice Girls or Britney Spears. At the age of 14, she wrote her debut song “Fish and Chips Shop” and at the same time persuaded her parents to give her money to record the album.

Children are rarely interested in one activity, but Charli XCX did record an album at the beginning of 2008. The songs attracted the attention of a promoter running illegal warehouse raves in east London. Despite the dubious nature of the parties, the parents supported their daughter and even attended several concerts.

In 2010, Charli XCX signed a contract with Asylum Records. The girl said in an interview with The Guardian,

“I was still in school, I'd just come out of this weird rave scene, and I wasn't really sure what to make of that. And when I got signed I hated pop music; I wanted to make bad rap music. I didn't know who I was. I didn't know what I liked.”

When Charli XCX lost hope in finding the best genre, she met producer Ariel Rechtshaid. She wrote “Stay Away,” under his guidance. In 2011, the track caught attention from music website Pitchfork and won the “Best New Track” award.

The debut album peaked at number 85 in the UK, and number 5 in the USA. Critics have completely ignored the disc. Charli XCX was frustrated by indifference and the music industry as a whole, but in the middle of 2013, she began recording her second album. She did not pay attention to the label's interests and created a dozen punk songs within a month.

In early 2014, Charli XCX recorded "Fancy," featuring Iggy Azalea. The track topped the Billboard Hot 100. Inspired by the success, the singer wrote "Boom Clap," a soundtrack to the drama The Fault in Our Stars (2014). The hit song peaked at number 6 on the Billboard Hot 100 and number 8 on the UK chart.

Due to the popularity of “Boom Clap,” Charli XCX had to postpone the release of her second album. As a result, she released Sucker in December 2014 in the USA, and in February 2015 in Europe. It debuted at number 28 on the Billboard 200 and number 15 in the UK. The track "Break The Rules" was very popular.

In July 2015, Charli XCX announced that she was recording her third album. In October 2016, the debut single “After Afterparty” was released, and then she faced the worst thing that can happen to a singer. Her album was leaked on the internet, and Charli XCX canceled the official release.

The singer found a way out, participating in side projects. She recorded "Boys," along with a music video featuring an ensemble cast of male celebrities (2 million YouTube users have watched the video for this song), “Dream Glow” with BTS, and worked with Selena Gomez.

Two facts play an important part in the personal life of Charli XCX.

In 2015, the young woman shot the documentary The F Word and Me about gender equality. The singer supports the LGBT community, which is clear from her Instagram photos, depicting her with a rainbow flag or sexy images with a woman.

Charli XCX says that she doesn't need a relationship. She does not have a boyfriend and does not plan to marry.

In October 2015, Charli XCX and Troye Sivan recorded the song “1999”, which became the first single for the new album Charli. Later, the woman wrote on Twitter that she had one more track “2099”, featuring this singer.

In May 2019, she released the second single "Blame It On Your Love," featuring Lizzo, and in July the third song “Gone” in collaboration with Christine and the Queens.

The release of Charli has been scheduled for September 13, 2019. It includes 15 tracks.

Charli XCX has a net worth of $4 million.