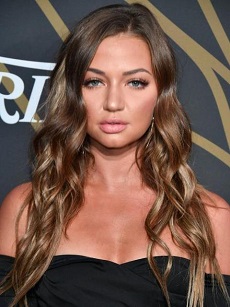 The Bedford native, Erika Costell became widely known as a model and an owner of multi-million YouTube channel and Instagram account. Erika writes and sings her songs. She is also known for her swim, fitness, and lingerie shoots. Costell’s net worth is roughly estimated at $200,000. Some of this money, she has earned through her online clothing store.

Erika’s birthplace was Bedford. She was born ho her parents on November 12, 1992. Like a lot of little girls, Erika liked looking fashion magazines. From an early age, she pretended to be the model in the pictures. Initially, she tried herself in cheerleading and devoted 11 years to that activity. After high school graduation, Erica enrolled at Middle Tennessee State University, where she earned a bachelor degree in BA.

Erika started her modeling career at the age of 16. She created herself a portfolio and proceeded to send it to various modeling agencies across the country. She waited and hoped for the best. At the same time, the 5 feet 7 inches height model hired her first manager Larry Murdock. Soon, he took her to her first-ever photoshoot. Later she signed to several famous modeling agencies.

In 2018, she was going to the Victoria’s Secret Fashion Show. She said that she had dreamed of being in the show since she was 12. Costell attended the Show at Pier 94 wearing a Mini One-Shoulder See-Through Dress Decorated with Semi-Precious Stones and Pink Leather Boots both by AFFAIR, and a Marzook Lucid Framed -Crystals.

Costell’s Coachella outfit of 2018 became one of the best. Her picture from the festival proved it perfectly. Also, Erika has her own line of clothes, including shirts, jackets, hats, pants, and sweaters in all kinds of colors for kids and adults. Her merch, hoodies, and so on are sold throughout Costell’s online clothing store.

Erica came into the spotlight after she started posting videos on YouTube. She came to the platform with overviews, opinions, reactions, and more. Started as a vlogger, she later made music videos. As of 2019, Erica had 4.6 million subscribers on the channel.

In 2017 she joined Team 10, a group of web stars and influencers legit taking over Hollywood. The squad included stars like Jake Paul, Tristan Tales, The Martinez Twins, Lucas, and Marcus Dobre and more, but Erika and Tessa Brooks became the only chicks there. Costell took the position of COO.

In 2017 Erika had a strong friendship with Team 10 founder, Jake Paul, who asked Erika to be his girlfriend during a Miami Heat basketball game in April 2018. In November, the couple announced their break up after less than one year together. In a lengthy letter on Twitter, Jake revealed the couple broke up a few weeks ago, after trying their

"best to work it out and find a solution."

He went on to explain the reasoning behind the split, adding:

"After many discussions and some serious soul searching, it became apparent to us weeks ago that we could no longer be boyfriend and girlfriend. While it was a truly heartbreaking decision, it is the healthiest thing for both of us." Soon, he started dating Tana Mongeau.