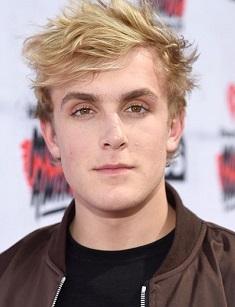 Jake Joseph Paul is a famous American actor and Internet celebrity. He came to prominence due to the video application Vine. Having succeeded there as an author of funny videos there and on YouTube, Paul was invited to star in a serious project. For example, he acted as Dirk on the Disney Channel series Bizaardvark. Nowadays, Paul grabs much attention and is at the spotlight due to his unruly and inappropriate behavior.

Jake Paul’s birthplace is Cleveland – he was born there on January 17, 1997, to the family of Pamela Ann Stepnick (née Meredith) and realtor Gregory Allan Paul. As a child, Jake moved to Westlake, Ohio. Paul was not the only of his family to reach popularity – he has an elder brother Logan Paul, YouTuber. They are of mixed nationality.

Before he was famous, Paul was a competitive wrestler. Jake Paul’s career started in September 2013 – he began from publishing short funny videos on Vine. His hilarious videos are a craze among his numerous fans and viewers. He often hurts himself filming his videos and has already made a name in taking risks like jumping over a car and stuffs like that while creating his videos. One of the most popular Paul’s videos are «I Flew Across the Country», and the collaboration with cute twins Taytum and Oakley Fisher - you are obliged to watch them if you are a real fan!

By the application’s shutting down, Paul had had 5.3 million followers and 2 billion plays on the app.

In 2015 the celebrity was offered to star in new comedy series Bizaardvark as Dirk.

On January 5, 2014, Paul, alongside other influencing stars, visited an event at the White House dedicated to social media. He took advantage of this situation - hid in a bathroom there before sneaking out of the White House at 3:30 am without being confronted by security – his YouTube fans liked this video.

May 30, 2017, was marked by releasing his song and music video alongside Team 10, called «It's Everyday Bro.» It succeeded to grab more than 70 million views on YouTube in the first month. Besides, it was named the third most disliked video on the website. In June the song finished 91 on the Billboard Hot 100.

On July 18, 2017, the news appeared that Paul’s neighbors wanted to file a class-action public nuisance lawsuit against Paul. This their reaction was caused by Paul’s fans. When the celebrity made their home address public, crowds of fans gathered near his home and made a horrible noise. On April 24, he was sued by Cobra Acquisitions, the company that owns the house, for $2.5 million.

The same month Jake Paul left the series Bizaardvark. Its directors said they had mutually agreed that Jake Paul would leave his role. Shortly after it was revealed that Jake Paul had to stop working on the project because of public complaints from Paul's neighbors regarding the noise generated by Paul's pranks, after-parties, and the large crowds of Paul's fans congregating in their neighborhood. Paul later revealed in an interview with The Hollywood Reporter that he was actually fired from Bizaardvark by Disney.

In January 2018, Paul became a subject of people’s heated debate after he published a video on YouTube named «I lost my virginity.» People criticized him for such inappropriate and sexually explicit content for his audience.

In 2018 YouTubers Deji and Jake Paul arranged a ferocious fight at the Manchester Arena. The boxing match was the chief support to their brothers KSI and Logan Paul in the main event. was crowned the winner after five rounds of the fight. The picture of his face after the fight became a subject of heated debate in the Internet.

The same year, Paul, alongside Team 10 embarked on a tour.

In January 2019, Jake Paul, and another YouTuber RiceGum promoted MysteryBrand, a website which offers the chance to open a digital «mystery box» of pre-selected items with a promise to win one in real life at random. Many users have said they have not received prizes they won through the site – it all was a lie.

Also, Paul has his own clothing line – he sells merches, T-shirts, shoes etc.

Jake Paul’s net worth is evaluated at $19 million.

In 2015 Paul met his future girlfriend, Alissa Violet. According to her, she had just finished high school and was working at Panera Bread in Ohio when she first met Jake. He put his phone number in her phone, and they kept talking. Then six months later, he asked her to fly out to the City of Angels. So, their relationship started. Then in summer of 2015, made the official move out west. Once in LA, she signed with Team 10, and the two were «kind of together,» but Jake wouldn’t say they were «official.»

Alissa began noticing Jake always had lots of girls around him; he would argue he wasn’t cheating on her because technically they weren’t together. Then she moved in with him, and he would have other girls over, and regularly ask her to leave their room so he could entertain a female guest in it for a few hours. It became the reason for their break-up.

Besides, there is a documentary «The Mind of Jake Paul» created by Shane Dawson which investigates mind of controversial fellow YouTuber Jake Paul as well as the psychology of YouTubers.