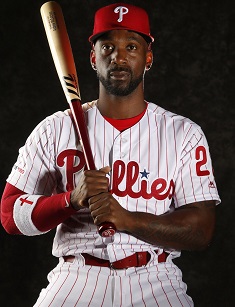 Andrew Stefan McCutchen (also known under the nickname Cutch) is an American professional baseball player performing on the outfielder position for the Philadelphia Phillies of Major League Baseball (MLB). His past teams are the Pittsburgh Pirates, the San Francisco Giants, and the New York Yankees. The player is often compared to other famous sportsmen such as Clayton Edward Kershaw and Aroldis Chapman.

Let’s know some more facts of his life!

Andrew McCutchen’s birthplace is Fort Meade, Florida. He was born there on October 10, 1986, to the family of Lorenzo McCutchen and Petrina Swan. His parents welcomed Andrew when they were high school students. Besides him, there was one more child in the family – a daughter Loren. Andrew lived with his mother while his father was Carson–Newman University student in Jefferson City, Tennessee. There Lorenzo played football and dreamt about the National Football League career. However, he denied this idea for the sake of earning a living and bringing up children. He became a church minister. They tied the knot on August 1, 1992.

When McCutchen grew up, he became interested in baseball. While studying in the 8th grade at Fort Meade High School, he joint students’ baseball team. As a senior, Andrew averaged .709, as he hit 16 home runs and 42 runs batted in (RBIs).

Besides baseball, young McCutchen dedicated himself to running track and playing football. While the first year of a high school, he won 4 × 100 m relay.

He was thought to be one of the top football recruits in the state of Florida. The player on a wide receiver position. However, Andrew chose baseball - he felt it was a passion of his life. McCutchen was even offered a full-ride scholarship to the University of Miami to play football.

McCutchen wanted to enter the University of Florida. That time he decided to take part in the 2005 MLB draft and was selected by the Pittsburgh Pirates. They signed a $1.9 million contract, and Andrew gave up the idea of enrolling at the University.

Andrew’s excellent stats was noted by professionals. He played the majority of the 2006 season for the Class A Hickory Crawdads, for whom he started for the 's All-Star team in his first full season as a professional player and was a post-season SAL All-Star. In 2007 he played again for Altoona, as well as for the Class AAA Indianapolis Indians, and hit a combined 265/.329/.388 with 11 home runs and 21 stolen bases in 513 at-bats.

In June 2009, the player got to the major leagues for the first time. His first match was held on June 4 – he played on a center position. His team faced the New York Mets. Andrew brought the franchise two singles, one RBI, three scored, and a stolen base in four at bats. Five days later the sportsman showed an astonishing result – it was his first four-hit game.

June 17 was marked by McCutchen’s first career home run off of Francisco Liriano of the Minnesota Twins. On August 1, Andrew’s team fought against the Washington Nationals – there McCutchen went 4-for-5, with three home runs and six RBIs. Totally, the sportsman closed this season batting .286/.365/.471, with nine triples (6th in the National League), an 81.48 stolen base percentage (6th), 12 home runs, 54 runs batted in, and 22 stolen bases in 108 games.

McCutchen managed to take part in the 2011 Major League Baseball All-Star Game in Phoenix – he replaced the injured Ryan Braun.

Two years later, the rumors appeared that Pirates' General Manager Neal Huntington planned to trade McCutchen to the Los Angeles Dodgers. The player himself didn’t know if it was the truth and was afraid. In an interview, Andrew shared he wanted to stay with the Pirates for the rest of his career.

Eventually, in January 2018, the sportsman was traded to the San Francisco Giants. However, he didn’t stay there for a long time.

So, having closed the season with 15 home runs and 55 RBIs, Andrew was traded to the New York Yankees for infielder Abiatal Avelino and pitcher Juan De Paula in August. Playing there, he dreamt about coming back to the Pirates.

In December, Andrew changed the place of working again – he signed a three-year contract worth $50 million with the Philadelphia Phillies. On June 3, 2019, Andrew, playing against the San Diego Padres, suffered a knee. After the game, McCutchen offered some perspective on the injury referencing his past ACL injury, which he experienced in high school. It was revealed several days later that he had a torn ACL, and he was ruled out for the rest of the season.

Although McCutchen needed some assistance getting off of the field after injuring his knee, the 32-year-old five-time all-star told reporters he could feel better tomorrow.

Remarkably, McCutchen is the latest in the list of injuries the Phillies have faced this season. So, the team has missed Zach Eflin, Edubray Ramos, David Robertson, Adam Morgan, Victor Arano, Tommy Hunter, Pat Neshek from their pitching staff and Roman Quinn from their outfield.

Andrew McCutchen’s net worth is evaluated at $30 million.

During the episode of the Ellen DeGeneres Show, he proposed his longtime girlfriend Maria Hanslovan on 11 December 2013. He ushered his long-term girlfriend from the audience; then he proceeded to get down on bended knee and pop the question before lavishing her with flowers. Of course, she said yes. By the moment, the couple had been dating for four years.

In 2012, McCutchen defended his wife from an angry group of fans after she tweeted support for Tim Tebow as he led his Broncos to a win in the Steel City.

She is a graduate of Slippery Rock University with a Bachelor of Science in Forensic Chemistry, Hanslovan graduated in 2011. McCutchen attended her graduation ceremony.

On November 27, 2017, McCutchen and his wife announced the birth of their child, Steel Stefan McCutchen.

Andrew likes to experiment with his appearance. So, he has changed several haircuts – he has even made dreads. After cutting it off, Andrew grew long hair.