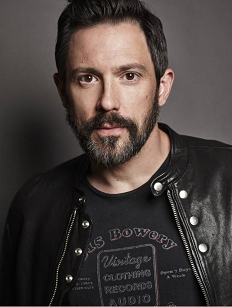 Steve Michael Kazee is an American singer and actor who is mostly known not for his roles in television projects but his appearances on stage. Kazee received Tony and Emmy Awards both for his role in the musical Once.

Steve Kazee was born in Kentucky in 1975. There is not much information about his family. Steve's father was a welder and healthcare assistant; he grew up in a trailer in Ashland, and so did his son. Kazee understood his passion for music when he was a child. When Steve was in Spanish class, he got suspended because he was singing too loudly. It was a fortune because, after this, the kid was sent to the school choir’s room.

Speaking about his education, Kazee attended Fairview High School and graduated from Morehead State University. In 2002, Steve moved to New York, where he got a degree Master of Fine Arts at NYU's Tisch School of the Arts.

Before appearing in movies, Kazee had his debut on stage in 2005 when he played in the Shakespeare’s comedy As You Like It. Also that year, he appeared on Broadway in the play Seascape. In 2006, Steve appeared on television first time in one episode of the series Conviction. Next year, he starred in Medium and Numb3rs. In 2009, Kazee appeared as Dominic Humphreys on CSI: Crime Scene Investigation.

In 2013, Kazee played Jeff Hines on the Elementary, the series about Sherlock Holmes, and Dustin Wycott on Drop Dead Diva. In 2015, the actor starred as Gus Pfender in the fifth and sixth seasons of the Shameless.

As a singer, Kazee had some singles which were used for various films. For instance, in 2011, he released a song A Thousand Years feat. Christina Perri for The Twilight Saga: Breaking Dawn – Part 1. In one of the episodes of Shameless, Steve sang the song about the Beacon Hill, and it went viral. A few years ago, the actor even had his band, the Shiny Liars.

For 2019, Kazee has a net worth of $2 million that he earned from his singing and acting career.

Speaking about Steve’s dating history, in 2005–2012, he was in a relationship with actress Megan Hilty. In 2015, Kazee announced that he was living with Michelle Beadle, a sports commentator. However, next year, they separated. For now, the actor does not have a wife or children but everything changes.

Since autumn 2018, he started dating Jenna Dewan, an actress, and dancer who used to be Jenna Tatum, a wife of the actor Channing Tatum. On September 24, 2019, the couple announced on their Instagram pages that they were expecting their first kid.

In 2012, Steve Kazee was nominated for awards for his role in Once: A New Musical twice, and he won the Tony Award for that part. In 2013, the actor received the Grammy Award also for that musical.