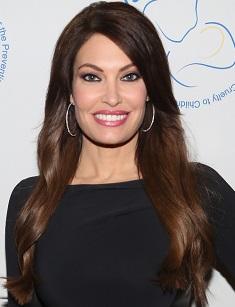 Kimberly Ann Guilfoyle is a famous American news personality who has co-hosted the news and talk show The 5 on Fox News Channel. She has also hosted the program Both Sides on Court TV, as well as served as a legal analyst on Anderson Cooper 360°. Before turning to TV career, the woman was a lawyer, and a senior campaign adviser. Let’s know more facts of her life!

Kimberly Guilfoyle's birthplace is San Francisco – she was born there on March 6, 1969. Kimberly is of mixed nationality – her father has Irish roots, while her mother was from Puerto-Rico. She was raised in her parents' Roman Catholic faith. She passed her childhood in the Mission District and Westlake. As a child, she studied at Mercy High School.

Young Kimberly had to get through her mother's death of leukemia - she was 11 years old at that time. According to Kimberly's words in an interview, her mother was just everything to her. She was a warm woman who worked in education with people with emotional challenges.

Speaking about Guilfoyle's dad, Anthony «Tony» Guilfoyle, he came from Ennis, County Clare, Ireland. In 1957 he moved to the USA as a 20-year-old man against the wishes of his family. In 1958 he was drafted and served for four years in the U.S. Army.

Having left the army, Anthony dedicated himself to the construction trades, became an estate investor.

Kimberly herself studied at the University of California, Davis. Later she attended the University of San Francisco School of Law. As a university student, she interned at the San Francisco district attorney's office and also did a few odd jobs on the side, including a stint as a model for Macy's, and a bridal magazine. Besides, she studied at Trinity College, Dublin in Ireland.

So, Kimberly Guilfoyle' is an attorney by profession. The woman emerged into television after several years of a successful legal career.

Kimberly Guilfoyle began her law career serving as a prosecutor in San Francisco but lost her job due to certain political reasons in 1996. Later, she moved to Los Angeles looking for better offers.

The woman worked for four-five years as a Deputy District Attorney. So, she dealt with cases related to domestic violence, kidnapping, robbery, arson, sexual assault, and homicide. Kimberly was very proficient as an attorney and was honored with several awards at the Los Angeles District Attorney's Office, including Prosecutor of the Month.

She was re-hired in the San Francisco District Attorney's Office in 2000 as an Assistant District Attorney, a position she served in for four years until 2004. Working there, she gained much publicity along with lead prosecutor James Hammer in 2002 for their work in the infamous People v. Noel and Knoller case, a second-degree murder trial involving a dog mauling.

Kimberly Guilfoyle started appearing in television programs while working as an attorney – those shows required legal knowledge. She left for New York where she was offered to host the program Both Sides on Court TV. Around the same time, she also began working as a legal analyst on Anderson Cooper 360°.

In 2006, she started working for Fox News Channel as a host of the weekend show The Lineup. Even though the show was eventually canceled, she remained a regular contributor for the network. Besides, Kimberly Guilfoyle served as a guest host on Hannity, On the Record, Justice with Judge Jeanine, and Fox and Friends.

In 2011, she succeeded to be selected as a co-host of news and talk show The Five which proved to be very popular. The celebrity also began co-hosting Outnumbered in 2014 and appeared weekly on The O'Reilly Factor's recurring segment Is it Legal? until the show was cancelled in 2017.

As a part of presidential election in the USA in 2016, Kimberly served as press secretary for President Donald Trump. In 2018 it was announced the woman had left for a vacation from Fox News for focusing on a pro-Donald Trump Super PAC. However, later it was revealed she had been forced out due to allegations that she had engaged in sexual harassment.

Guilfoyle's net worth is said to be around $5 million.

Kimberly Guilfoyle’s personal life is thought to be unsuccessful – she has several former husbands, past boyfriends, broken relationships.

The couple was married for only three years and the relationship was "bicoastal." However, they did not file for divorce until 2006. Kimberly accepted a job with Court TV after they were married and relocated to New York, while he ran San Francisco government. They eventually announced their divorce – their relationship was officially finalized on February 28, 2006.

On May 27, 2006, Kimberly tied the knot with her partner Eric Villency. On October 4, 2006, the couple welcomed their son named him Ronan Anthony. After some years of marriage life, they had some issues. Later, Kimberly announced the news about their separation in 2009 and was divorced eventually. This time, the cause of the divorce was not disclosed. There are rumors that the separation was based solely on tensions surrounding her bi-coastal lifestyle.

In May 2018, there were rumors the woman dated Donald Trump Jr. – they were noted attending an event together. Besides, Kimberly was thought to have dated Antonio Scaramucci, the infamous, fiery, short-lived former White House communications director.

Kimberly is currently happily living with her son Ronan.

In 2015 the woman purchased a Central Park West apartment at The Beresford for $3.4 million. It was once filled with 200 taxidermied animals. The apartment was first listed in July 2014. Guilfoyle hired Champion Platt to renovate the apartment, so she didn’t have to live with dead animals in every room.

Besides her law and TV career, Guilfoyle is a writer of a successful book in 2015, Making The Case: How To Be Your Own Best Advocate. The book was included in Nielsen BookScan’s best-seller list. The book consists of stories from Guilfoyle’s life - she offers advice to readers about how to succeed in their own careers. The book tells readers how Kimberly was inspired by her father to be the best she could be after her mother’s death from leukemia. Reading it, we also can know what Guilfoyle is doing nowadays.

Besides hosting news and talk shows, Kimberly tried out acting. So, in 2004 she took part in a recording of Happily Even After. She had the role of a public defender opposite Ed Asner and Shirley Temple's niece, Marina Temple Black.

The project was screened at the Tribeca Film Festival.