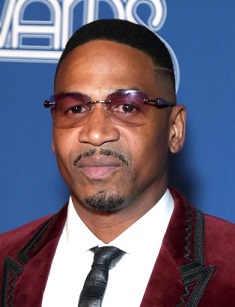 Stevie J’s full name is Steven Aaron Jordan. The native of Buffalo is widely known as a successful record producer, songwriter, and musician. He got wide acclaim in the 90s, won the 40th Annual Grammy Awards as a producer of the Best Rap Album of 1996 “No Way Out” of Puff Daddy. The other work that defines Steven’s career is his contribution to the seminal album from The Notorious B.I.G. “Life After Death”. Stevie J produced some songs by a lot of famous musicians.

Some of them are Jay Z, Mariah Carey, Beyoncé, Brian McKnight, Tevin Campbell, and others. Also, Stevie J wrote songs, played the bass guitar, and took part in different TV series. Thanks to his activity, Stevie has 2.3 million followers on Instagram. The producer has six children. His net worth is estimated at $5 million.

Steven was born in Buffalo on November 2, 1971. His parents were Penny Daniels and Moses Jordan. His father was a Pentecostal bishop. Steven never knew his mother because she left the family when he was just eight months old. Stevie began interested in music early. He was picking up different instruments, toying around with the drums in church. Later he started to play the keyboards, and that led to the guitars and the strings. He was a small-town kid with big city dreams.

He spent his formative years in Rochester, NY. He graduated from high school and started working with an American R&B quartet “Jodeci”. He was living in Buffalo at that time. But he had the opportunity to go back to Rochester and sing at the fashion show. So when he first got to the fashion show, he got there earlier with his partner Sonny Boy.

There wasn’t anybody, so they went to the bar, and they got some food, got a few drinks. Before they got up to sing, they learned that some people from “Jodeci” came to the show. There were Dalvin and K-Ci. They liked Steven’s singing and tracks. They asked Steven, who was the author of the songs and didn’t believe that it was Steven. Then he went to the piano and started playing a few of the jams. Then Dalvin said to young talent: “Oh, you are with us”. It was the beginning of Stevie J’s music career.

Stevie J’s professional music career started from the Bad Boy Records “Hitmen” in the 1990s. He collaborated with Sean Combs, who was the label’s owner and the producer of lots of Bad Boy projects. The first Stevie J’s project on this role was the single “Only You” featuring The Notorious B.I.G.

Also, the novice producer accompanied several records for the album “Life after Death” of Notorious B.I.G. Some of them are “You're Nobody”, “Notorious Thugs”, “Nasty Boy”, “Mo Money Mo Problems”, and “Last Day”. Thanks to these projects, Stevie J received wide recognition and made his name.

In 1997, Stevie J. was engaged in the production work of the song “I'll Be Missing You”. During that time, he also worked with Mariah Carey on her album “Butterfly” and produced songs, such as “Honey”, “Breakdown”, “Babydoll” and “Breakdown”. The same year, three of the Stevie J-produced records; “Honey”, “Mo Money Mo Problems” and “I'll Be Missing You” topped the Billboard Hot 100. Later he won the “Grammy Award” for his production work on Puff Daddy's album “No Way Out”, which was recognized as the Best Rap Album.

In 2018 music producer hosted a launch party at Atlanta hotspot Revel to debut his new nightlife venture Sleazy J’s. Over 400 guests braved the frigid temperatures to experience the upscale pop-up party that is set to redefine “sleazy”.

In 2012 the VH1 reality television series, Love & Hip Hop: Atlanta was released. Stevie J was among its first participants. It featured Stevie J in a love triangle, involving his future wife, Joseline Hernandez, and the then girlfriend, Mimi Faust (in a new season she was the victim of a home invasion and encountered a man sitting in her car who then shoots at Mimi).

A year later, Steven and Joseline married. Since then, the husband and wife have become a famous couple in the hip-hop world, and have made cameo appearances in several music videos. They even visited Cannon's Wild 'n Out, where Stevie told Nick Cannon that he slept with Cannon's ex-wife and the mother of his children Mariah Carey not once but twice during the show's taping.

The break up of Joseline and Stevie J was the center of attention. Now, they are not on good terms. However, Joseline still leans on his mother, Penny for support. They met up for lunch, and Joseline confided in her mother-in-law about her marital troubles. Miss Penny had some good advice and asked Joseline to go to church with her.

In 2018 Stevie J married the Lakeland native Faith Evans, an American singer, actress, and producer. The Internet was full of amazing wedding pictures. Evans married Biggie, the Stevie J’s friend, who was killed in a drive-by shooting at the age of 24. Stevie is also the godfather of Evans’ son with Biggie, C.J. Wallace.

It’s interesting to know that people often think that Stevie J is also the book’s author. Sometimes they think that books “Falling in Between” and “Over You” were written by the famous producer. However, it’s wrong. The real author is a woman, Stevie J. Cole.

Long before Love and Hip Hop: Atlanta, Stevie J had another career. He was a successful music producer and industry impresario. His greatest produced songs: