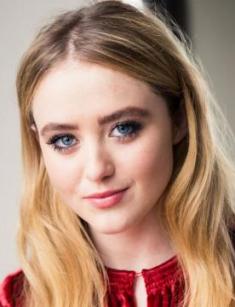 Kathryn Newton is a young American actress who debuted on the screen in 2001 and can boast a long filmography today. She is known for her parts in Three Billboards Outside Ebbing, Missouri, Supernatural, Big Little Lies, and so on.

The would-be actress was born at the beginning of 1997 in California into the family of Robin and David Newton. She has English roots. The parents noticed their daughter’s acting talent early and took her to auditions.

As a school student, Kathryn was fond of golf. Her father is a professional golf player, and the girl inherited his abilities, showing excellent results in competitions. Once, she broke the school record in this sport. At 15, Newton planned to participate in the United States Women's Open Championship, but she was busy with another movie at that moment.

Four-year-old Kathryn debuted in the series All My Children (2001-2005). She personified Colby Chandler and did her job perfectly. Soon, directors noticed the young talent.

Although it was challenging for the beginning actress, the parents did not limit her to one project. In 2002, the girl successfully auditioned for the short movie Abbie Down East and participated in another short project Bun-Bun the next year.

In 2008, the young star joined the cast of Gary Unmarried. She played Louise Brooks for two years and appeared in 37 episodes. Later, the series brought Newton the Young Artist Awards for Best Performance in a TV Series (Comedy or Drama) - Supporting Young Actress.

Since that moment, the actress has been actively involved in new series and movies. In 2011, she played in Bad Teacher starring Cameron Diaz; the next year brought the lead role in Paranormal Activity 4. Both critics and the audience appreciated Kathryn’s work: she was nominated for Young Artist Awards – Best Performance in a Feature Film - Leading Young Actress and won.

In 2013-2014, Kat appeared in Dog With a Blog and Mad Men and then focused on one project, Supernatural, where she personified Claire Novak. Eric Kripke created the fantastic series; the story consists of urban legends and folk plots. It was the longest sci-fi series on television: more than 200 episodes came out. Although Newton’s role was secondary, it gave her pretty much recognition.

In 2016, the young woman began to work on Christopher Cantwell and Christopher C. Rogers’s series Halt and Catch Fire; she was given the role of Joanie Clark. It is the story about the quickly developing computer industry in the mid-1980s and early 1990s.

Further on, Newton worked on the series Big Little Lies by Jean-Marc Vallée and Andrea Arnold. The drama is based on Liane Moriarty’s novel with the same name. Two seasons have been released so far.

In 2017, Kathryn participated in Lady Bird and Three Billboards Outside Ebbing, Missouri. The next year, she expanded her filmography with Little Women, Blockers, and Ben Is Back.

Apart from cinematography, the actress often appears in TV commercials.

Kathryn Newton is an experienced and busy actress; she is interested in new projects more than children and marriage. There is little information about her romances, and fans can only guess what is going on.

In 2017, the artist posted a picture with a young man on Instagram: the couple went to a stadium. She congratulated him with his birthday and wrote that she loved him.

Fans could not but ask Kathryn if the man was the actress’s boyfriend. Newton did not make any comments.

Kathryn likes social networks and regularly posts on Instagram: photo shoots, going out with her friends, home routine, and pictures in a swimsuit. The actress has to keep fit due to her projects; her height is 5.41 feet (165 cm.), and her weight is 121.25 lbs. (55 kg.).

Kathryn Newton’s net worth has not been disclosed yet.