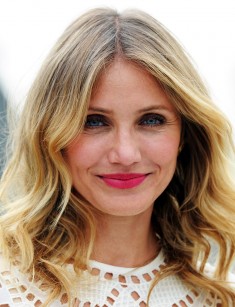 Cameron Michelle Diaz was born on the 30th of August, 1972 in San Diego, California, USA. Her parents had a mixed blood. Her father Emilio Diaz was of Cuban origin and worked as a foreman for the oil company. Her mother Billie Joanne Diaz (née Early) – had English, German, and Cherokee ancestry and worked as a broker in import/export company. Cameron has an elder brother Michael and a sister Chimene.

By words of actress her childhood was happy and carefree and there had always been an atmosphere of love and freedom in their family. Girls preferred heavy metal music, had fun at the parties and sometimes even fought with their classmates. "Metallica", Ozzy Osbourne and "One Halen" – this is the list of the favorite singers and bands of the girls. However, their parents tolerated their daughters’ preferences and, moreover, their mother accompanied them to rock-concerts for a couple of times.

At this period of time, Cameron dreamt of becoming a zoologist. At home, a girl had a whole zoo: dogs, cats, birds, mice and even two snakes. Who would have thought ever that she would become a brilliant actress and model?

At the age of 16, Cameron attended one of the parties and got acquainted with the photographer Jeff Dunas, who offered her a job at the model agency "Elite". As Cameron was impulsive by her nature, she accepted the invitation at once and signed the contract. And it was worth it, the career of the young Diaz really started taking off.

In a short time Cameron Diaz's face could be seen in fashion magazines and in different commercials: for the shootings, a girl already earned up to 2000 thousand dollars a day. At that time a girl worked with world-famous brands, such as Calvin Klein, Levi's and Coca-Cola. At that period of time, Cameron was traveling a lot, she visited Japan, Australia, Algeria, France, and Mexico.

Diaz left the model business of her own free will: at 18 she discovered the film industry where she began her career all of the sudden. But then her career got better and better.

Cameron Diaz began her career in cinematography in the middle of 1994 when she accidentally stumbled upon the script of the movie "The Mask", which she found at her manager's table. After 12 auditions for the role of the major character Tina Carlyle, it was Cameron Diaz who got the role. Jim Carrey performed the main male character in this movie.

The movie became extremely famous and Cameron Diaz was discussed as a young talent. She was called and later awarded as the most promising actress of the year. In spite of the fact, that many skeptics expected that Diaz would lose her popularity after her first role, an aspiring actress moved further: she attended acting classes and was fully involved in her work.

Soon she was entrusted with serious roles, and at that time ex-model appeared in the pictures "The Last Supper", "My Best Friend’s Wedding", "Fear and Loathing in Las Vegas" and many others.

In 1996 Cameron got a happy chance to show her talents and she played a profound dramatic role in the movie "Feeling Minnesota". After Gwyneth Paltrow had denied taking part in this movie, Diaz was invited to perform the leading role. Diaz managed to convince everybody that her acting talents are not limited to comedy roles only.

But actress became really famous after the movie "Charlie’s Angels" where she played a Special agent together with Drew Barrymore and Lucy Liu. This role not only made her more popular but also brought her the status of the most sexual Hollywood actress.

The movie "Vanilla Sky" became the next important step in the career of the actress. Here she worked together with Tom Cruise and Penélope Cruz. In this movie, she played the role of the girlfriend of the main character. In 2000-s the movies "The Holiday" (2006), "What Happens in Vegas" (2008), "My Sister’s Keeper" (2009) were released and brought Cameron Diaz fame. Also, the actress tried herself in a new sphere and voiced-over Princess Fiona in the world famous animated series "Shreck". On the 23rd of June, 2009 a new star № 2386 with the name of Cameron Diaz appeared on the Hollywood Walk of Fame.

In 2011 Diaz took part in the picture "Bad Teacher" and played the leading role in it. Despite negative feedbacks, the movie was successful within the target audience.

From time to time her successful career became calm because of some unfortunate roles. So, at the beginning of 2015 Diaz was nominated for antipremio "Golden Raspberry" for her roles in movies "Sex Tape" and "The Other Woman".

Personal life of Cameron Diaz is as interesting and exciting as her acting career. There were a lot of famous men among her soulmates.

When she was young she had her first serious relationship with Carlos De La Torre. Their relations lasted for 5 years and despite the fact they broke up they still express appreciation for each other.

An actor Matt Dillon was the next passion of Cameron Diaz. They met on the movie set of "Feeling Minnesota". Though after three years of civil marriage the couple separated. Then a young woman began dating with Jared Leto, with whom they were engaged but in 2003 they broke up.

Special public attention was paid to her relations with a singer Justin Timberlake who was 8 years younger than Cameron. The date of the marriage was set for Christmas Holidays of 2007 but the day before the couple broke up all of a sudden.

Later the actress had romantic relations with a baseball player Alex Rodriguez till September 2011. It was said, that after that Cameron also had love affairs with rapper P. Diddy and actor Jude Law.

In January 2015 Cameron Diaz got married to the musician Benji Madden, a guitarist and background singer of the band "Good Charlotte". Now the couple is settled in the mansion in Beverly Hills.

From time to time Mass Media publishes information about Cameron’s possible pregnancy. At different times while browsing it's possible to stumble on the photos where the actress seems to be pregnant but each time the actress calls such information leakage just a fake.

At the present moment, Cameron Diaz's fans noticed that actress got rather plump at the latest photos and supposed that it was connected with her attempts to get pregnant with the help of hormone therapy. It is known from the sources that 44-year Diaz and Madden dream to have a child, but they have some problems. Anyway, the actress doesn't accept any prepositions вгкштп long time and prefers to spend all her spare time with her husband.

Cameron Diaz already presented two books about feminine beauty and health. A 44-year actress encourages women to love themselves and not to feel embarrassed with their age. On the pages of her books ("The Body Book" and "The Longevity Book") Cameron shares with the readers, her own experience of wonderful life after 40 and she considers age-related changes natural and even attractive.