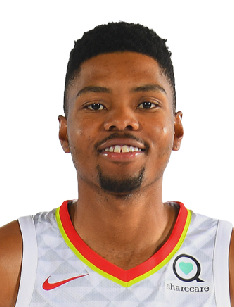 Born in North Carolina, Kenneth Lamont Bazemore Jr. started a basketball career in NBA in 2012, as a rookie of Golden State Warriors. He was undrafted and signed with them just after preseason. Bazemore was playing for Golden State in 2012 – 2014, LA Lakers in 2014, and Atlanta Hawks in 2014-2019. In June 2019 Bazemore joined Portland Trail Blazers.

He was traded in exchange for Evan Turner. He plays at a small forward and shooting guard positions. Kent has a net worth of $500,000. His income source is mostly from being a basketball player.

The Kelford native, Kenneth Bazemore was born on July 1, 1989, in a family of Glynis and Kenneth Bazemore, Sr. He studied at Bertie High School in Windsor and showed a lot of prospects right from then. In his junior year, he was awarded Roanoke-Chowan Player of the Year. Kent also got the same award in his senior year.

In 2008 Kent enrolled at Old Dominion University of Norfolk. Its basketball team participated in NCAA Division I men’s competition. He currently ranked 21st nationally in steals. He also blocked 30 shots. Bazemore was second on the Monarchs in scoring at 12.3 points per game, was named second-team All-CAA and NABC All-District 10. ODU finished the season with a 27-7 record, capturing its second straight CAA title and advancing to the NCAA Tournament as a number nine seed.

Bazemore had three or more steals in a game 11 times, including six against UNC Wilmington and five against Richmond. He also blocked three shots in a game against Hofstra in the CAA semi-finals and against Georgia State on February 15. Bazemore also grabbed six or more rebounds 11 times including12 at William and Mary, ten at Delaware, nine vs. Xavier and eight vs. Cleveland State.

Kent’s career in NBA didn’t begin well. On the 2012 Draft, there was no team that selected him. He stayed undrafted and decided to take part in Summer League. In Orlando he was playing for Thunder, in Las Vegas Kent got in a roster of Warriors. In the end of July Warriors signed a contract with Bazemore.

Kent didn’t appear in a starting five in his rookie season. He even played in Development League for the second team of Warriors. Kent didn’t show high stats, and his career high was only 14 points in February 2013. Bazemore couldn’t prove his importance to head coach, however in summer joined Warriors in Summer League again.

Kent spent autumn 2013 rather badly, and in February 2014 he moved to Los Angeles. Golden State traded Kent for Steve Blake. Bazemore’s trade to Lakers was unsuccessful. Even though he could score 23 points in his debut game against Pelicans, he got injured in a month. An MRI exam showed that he had a torn peroneus longus tendon in his right foot. Bazemore missed the remainder of the season and had surgery to repair the tendon.

In September the player signed with Hawks, where he could find himself. Although he didn’t show high stats, Kent scored more than 10 points on average in every season and played a leading role in the team. In 2015-2016 he made several career highs of 25, 29 and 32 points. Bazemore was among the few consistent performers for Atlanta in season 2017-2018 in which his game stats on average were 12.9 points, 3.8 rebounds, 3.5 assists, and 1.5 steals per game.

Summer 2018 was full of rumors about his future career. In July the Rockets had their eyes locked in on Bazemore, who was coming off the best season of his NBA career. They had long coveted Kent, as they tried to sign him when he was a free agent back in 2016, and were feeling repercussions of losing Trevor Ariza and Luc Mbah.

Later Pelicans were looked for the player on a small forward, and they were considering the candidacy of Bazemore. In winter 2019 the Hawks had been widely speculated as one of the most notable sellers at the NBA’s trade deadline. Houston was interested in Bazemore’s trade again. As they geared up for another deep playoff run, they needed more competent players around their superstar guard tandem of James Harden and Chris Paul.

Kent Bazemore could affect the game in so many ways and didn’t need the ball to do so. It was critical when in playing with Harden and Paul. But the trade didn’t succeed, and the reasons are still in secret. In April 2019 Bazemore exercised his $19.2 million player option for the 2019-2020 season. While the Hawks continued to build around their young core, it was unclear where Bazemore fit into Atlanta's plans.

Bazemore was considered to be a trade asset for Atlanta in summer 2019. On June 24, it was announced by the president of basketball operations Neil Olshey, that the Portland Trail Blazers acquired Kent Bazemore from the Hawks in exchange for guard Evan Turner. Then Neil said:

“Kent is a two-way wing that adds depth to our perimeter is an excellent fit with our returning players and will transition seamlessly to our style of play. We want to thank Evan for his many contributions to the team. He was a critical player in our run to the Western Conference Finals, and he will be missed on and off the court.”

In 2012 Under Armour was a fledgling apparel company without many big basketball sponsors. Bazemore's agent sold Under Armour on signing Bazemore to establish a West Coast connection, with his proximity to Stephen Curry and Klay Thompson being an added benefit. So, that summer, Under Armour sent Bazemore tons of clothing and sneakers, even though Bazemore was on a non-guaranteed contract — he still had to make the team.

Nonetheless, with an excess of gear, Bazemore started giving his teammates clothing, while others, such as Curry — who Under Armour reportedly already coveted — took note. Bazemore helped convince Steph Curry to leave Nike and sign with Under Armour. Curry then soared to NBA MVP and championship-winning heights while endorsing the brand, which aided the company's rise as a basketball power. In 2017 Kent reportedly agreed to a five-year extension on his endorsement contract with Under Armour.

In February 2017, the Hawks tweeted out their congratulations to Bazemore after a special Grammy Awards ceremony. Then Chance the Rapper gave an inspired performance while raking in three victories, winning the award for "Best Rap Performance", "Best Rap Album", and "Best New Artist."

The Hawks noticed a striking resemblance between Bazemore and hip hop icon. It is quite possible that it was Kent who received the award instead of the rapper. Since then people started making various memes and pictures, where they wrote about Bazemore: “He looks like Chance the Rapper”.

Kent was dating with field hockey player Samantha Serpe since his rookie years. They tied a knot in July 2017 at Biltmore Estate, North Carolina. Samantha left the corporate world in New York and San Francisco, where she had worked for years to move to Atlanta to be with her husband. Bazemore’s wife quickly founded herself in business and blogging.