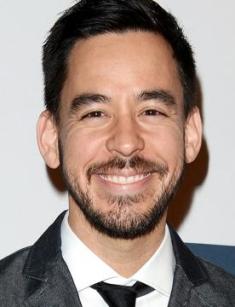 A talented person can do anything. The co-founder and vocalist of Linkin Park Mike Shinoda writes songs, scripts, and soundtracks, paints, produces, and works as an MC.

After Chester Bennington’s death, the musician found the courage and announced on Twitter that life should go on, and the group would continue to exit. The song “Over Again” from the new album perfectly illustrates what the friends had to overcome and how Linkin Park was preparing a show in Chester’s memory.

Michael Kenji Shinoda was born in February 1977 in Panorama City, California, and grew up in Agoura Hills. The town is known as the home of two Linkin Park members: Mike and Brad Delson.

The boy’s father was Japanese, and the American mother had Russian and Hungarian roots. Mike has a younger brother Jason.

Shinoda is Yonsei: the Japanese call the fourth generation of their people born in the USA this way. As the singer told journalists, his ancestors were well aware of the reservation life: after the Pearl Harbor bombing, the Japanese who lived in the United States were forced to live in special camps. The song “Kenji” from Fort Minor’s album The Rising Tied is about the racial discrimination epoch.

As a high-school student, Shinoda bought a keyboard and started writing music; he transformed his own room into the first recording studio and worked there with his classmate Brad Delson. Soon, the drummer Rob Bourdon joined the friends, and the group Xero was born.

The interest in painting brought Michael to the Art Center College of Design. His design and artistic skills proved to be useful in the future: he created the covers of Linkin Park and Styles of Beyond, as well as the band’s website and T-shirts for Linkin Park Underground club.

Mike met another group member, Joe Hahn, at the college; at the same period, Delson found his soulmate in his roommate David Michael Farrell who played the guitar. The new friends quickly became the part of Xero; soon, the band was renamed into Hybrid Theory. By 1999, all the members of the would-be Linkin Park gathered together.

Producers and music companies were reluctant to collaborate with Hybrid Theory, and the artists organized their own promotion. They shared their demo songs, wrote posts on other groups’ websites, send their T-shirts, discs, and stickers to people. As Bourdon remembered, the young men took boxes from the nearest post office and stuffed his apartment with packages. Finally, the group took the attention of Warner Bros. Records.

Shinoda mentioned he got addicted to writing music in his childhood when his work won a contest. Mike realized he wanted to devote his life to music after he saw the performance of DJ Killer B along with the iconic metal group Anthrax and the African hip-hop group Public Enemy.

Mike was a vocalist until Chester Bennington joined the band; he also invited his friends. One day, a might-have-been vocalist drew the group’s attention to Bennington and said: “If you guys don't take this guy then you're fucking idiots”. The mixture of rock and rap voices with DJ Joe’s samples introduced the unique sound.

Chester Bennington became Linkin Park’s idol, and only true fans know that Mark Wakefield was the soloist before him. The singer left the group as he believed it was not going to succeed. Before he quitted, Wakefield created several songs from the debuting album Hybrid Theory: “Crawling”, “Runaway”, “A Place for My Head”, and “Forgotten”.

The disc was a triumph; its financial success and popularity among listeners were incredible. It started from the 16th position in Billboard and reached the second place. Mike’s dream came true: the group was nominated for Grammy Award for Best Rock Album; the song “Crawling” actually brought the prize. The next year, the music video for this track won another Grammy.

By Christmas 2000, Hybrid Theory earned the gold status in the United States. In January 2003, the single “One Step Closer” reached the 24th place in British charts, and Shinoda’s favorite song “Papercut” was number 14.

Mike’s solo career is equally brilliant. In 2005, he presented the album The Rising Tied with the project Fort Minor; it had been created for the ideas different from Linkin Park’s style. The single “Where’d You Go” became number four in Billboard Hot 100 and got millions of views on YouTube. Besides, the musician owns The Shinoda Imprint and Machine Shop Recordings.

Mike is a happy father of a son and two daughters. In 2003, he married the children’s writer Anna Hillinger; he devoted the song “Where’d You Go” to her.

The singer hates pop music and calls it evil. Colleagues nicknamed him “Spike Minoda” because of the man’s height (6 feet or 183 cm.) and big head. Mike likes spicy oriental cuisine and green apples; he prefers to use the third person speaking about himself.

Chester Bennington’s death was a severe blow for Mike; the musician spent six months alone in his house in Los Angeles. Further on, he presented the solo album Post Traumatic; the release took place on January 25, 2018.

“The tracks are reverberant electronic dirges; the rhymes, heading into sung choruses, testify to bewilderment, mourning, resentment, self-pity, and questions about what to do after a cathartic memorial concert”, New York Times wrote.

The songwriter, however, sees the album as the symbol of breaking the deadlock and coming back to the light. Shinoda expressed his hope that the album would show people suffering from a loss they were not alone.

The artist seems to follow the main idea of the album. Summer 2019 is marked with the Post Traumatic tour; he posts the latest news about upcoming shows on Instagram.