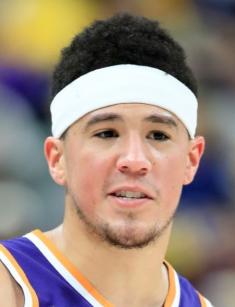 Devin Armani Booker is an experienced highly-ranked basketball player from the United States performing for the Phoenix Suns under the number 1 on his jersey. Being influenced by his dad, also famous NBA player in his past, he built an excellent sports career. Let’s know more facts of Devin Booker’s life!

Devin Booker's birthplace is Michigan. He was born on October 30, 1996, to an African–American father, Melvin Brooker, a mother of mixed ethnicity, Veronica Gutiérrez. So, the woman had relatives in Mexica, Puerto Rico and the United States. Booker's dad was an experienced NBA player when he met Veronica during his tour.

The two were not officially married. When Booker was born, the couple decided they would both take care of the baby. However, little Devin majorly spent time with his mom cause Melvin was busy with his international basketball career.

Parents raised Devin in Grandville, Michigan, which was a suburb of Grand Rapids. White population dominated in the district. He traveled alongside his father during the summer holiday. They often settled in Moss Point, state Mississippi, a place that had a significant black population – initially, it shocked Devin. However, later, he got used to it.

Booker was influenced by his dad while growing up. So, he became interested in basketball, joined high school's students' team. Interestingly, Booker and his dad were really close. When Melvin Booker had to be out of the United States because of matches, the two communicated through e-mails.

That time Melvin Booker retired to dedicate time to his son. He noticed Devin's talent and offered to leave for Mississippi together. The boy initially denied the idea. However, Melvin managed to convince Devin's mother, and Devin soon became a student of Moss Point High School, where Melvin was hired as students’ coach.

Being a high school student, Devin demonstrated his abilities and desire to build an international basketball career. In summer 2011, fighting against another High School, the player made 17 points. Booker showed the best stats in comparison to his teammates. His perfect playing grabbed the attention of a famous 'Press-Register' journalist. In the article he described that Devin's average of 22.7 points that year demonstrated that he had advanced to be among the most productive sportsmen on the coast.

As time passed, Booker kept improving his results. So, several NBA teams asked his dad to sign Devin. While attending High School event, the player made it public the University of Kentucky had offered him to join them.

On November 2, 2014, Devin's team faced the Pikeville University. In the match, Booker registered 16 points – it marked the start of his excellent basketball career. Several days later the team fought against the University of Montana, when Booker showed a high result of 18 points. The match held several days later which was against Texas–Arlington brought him 19 points – Booker established a new high result.

Devin Booker's initial season in his college career was closed with 10 points per game. That time he already planned to take part in the NBA draft. In spring 2015, the sportsman dropped out of college and applied for participation in the NBA draft.

Having demonstrated his abilities, the player joined the Phoenix Suns. In his initial fights played in Summer League, Booker made on average 15 points per fight. His debut NBA match was over the Dallas Mavericks several days prior to his birthday. Remarkably, it made him the first 18-year-old NBA player in the whole its history to start an NBA career at such an early age.

During his first year with the franchise, Booker played perfectly. Performing against the Sacramento Kings in January 2016, he registered 21 points. Several days later the franchise faced the Indiana Pacers – and Booker performed perfectly scoring 32 points. Due to it, Devin Booker became one of the youngest NBA player and Suns representative who have registered more than 30 points in a game.

In March, the Suns faced the Miami Heat. In the match, Booker registered 34 points reaching new career height. Also that time, in the match against the Minnesota Timberwolves, he made 30 points. Totally, his rookie season was closed with 1,050 points.

Kobe Bryant and Dwyane Wade, basketball icons, were astonished by his successes, and they publicly expressed their praises.

2016 season was started by the match against the New Orleans Pelicans. Booker made 38 points playing there. Several days later, the sportsman scored 39 points in the game against the Los Angeles Lakers. That year he also competed in the NBA All-Star Weekend's Three-Point Contest.

Match against the Milwaukee Bucks which was held in February 2017, brought Booker 31 points. In total, the season was closed with an average of 22.1 points per game.

October 2017 was marked by a successful game against the Portland Trail Blazers. So, Devin Booker made 34 points - it the match number 21 for him where he has made 30+ points. He was the third NBA sportsman who has achieved this position.

In July 2018 Booker signed a five-year, $158 million maximum contract with the Suns.

On September 10, he left the franchise for six weeks after surgery to repair the fifth metacarpophalangeal joint in his right hand after he injured it training in summer camp.

At the beginning of the season, he had multiple 30+ point games in spite of missing six matches after straining his hamstring.

On April 3, in a 118–97 loss to the Jazz, Booker injured his left ankle and had to miss the last three games of the season.

During whole Booker’s career with the Phoenix Suns, the franchise has never thought about trading him because of his brilliant playing. However, in 2019 Devin said he would have liked to work as a free agent.

Devin Booker’s net worth is evaluated at $6 million.

Speaking about Booker’s private life, he is rumored to be in a relationship. However, there is no information about his current girlfriend’s personality.