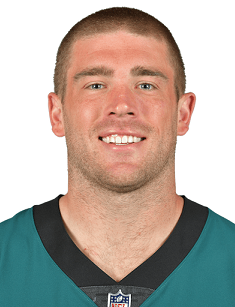 Zachary Adam Ertz is an American football player performing on a tight end position for the Philadelphia Eagles of the National Football League (NFL). He started his career after being drafted by the Eagles in the second round of the 2013 NFL draft and earned lots of awards in these years.

Zach Ertz was born on October 10, 1990, Orange, California to an extended family – he was the oldest of four kids. Zach's father was the Lehigh University football player from 1981 to 1984.

Speaking about Ertz's education, he studied at Monte Vista High School in Danville, California where joined its students' football team. In his senior year, Zach Ertz registered 56 receptions, 756 receiving yards, and 14 receiving touchdowns for the football team and was named to the All-East Bay Athletic League first team.

Later Zach Ertz entered Stanford University, where he played for the Stanford Cardinal football team from 2009 to 2012. In 2010, totally, the sportsman appeared in 13 matches and scored 16 catches for 190 yards and five touchdowns. Zach Ertz also took part in the Orange Bowl where he faced Virginia Tech. In the game, he made two receptions, including a touchdown.

In 2011, Ertz scored 27 receptions, 343 receiving yards, and four receiving touchdowns. That year he missed three matches, having injured his knee. The player appeared at the Fiesta Bowl – there his team fought against Oklahoma State, and he scored four catches and one touchdown. In his senior year, Zach Ertz made 69 catches, 898 receiving yards, and six touchdowns. He was lucky to perform at the Rose Bowl where registered three catches for 61 yards. In total, the sportsman made 898 receiving yards that season. Zach Ertz was a consensus All-American, a finalist for the Mackey Award, and an All-Pac-12 first team selection.

That time Ertz decided to take part in the NFL draft.

On March 24, 2013, the sportsman appeared at Stanford's pro day and performed some of the drills again in an attempt to shorten some of his times and increase his vertical and broad jump. His stats were the 40-yard dash (4.67s), 20-yard dash (2.74s), 10-yard dash (1.64s), vertical jump (35.5"), and broad jump (9'6"). As part of the preparation for the draft, Zach Ertz attended private workouts with the Atlanta Falcons and the Philadelphia Eagles.

Eventually, he was selected by the Philadelphia Eagles. The franchise's coach Chip Kelly was impressed by Ertz's playing.

In terms of stats, Ertz was the second-best player behind Brent Celek. In Week 14 of the season 2014, Zach scored two receptions for 39-yards and caught a season-long 35-yard touchdown. However, the team was beaten by the Seattle Seahawks. On December 20, the Philadelphia Eagles fought against the Washington Redskins – in this match, the sportsman made 15 receptions for 115 receiving yards. In total, his second season was closed with 58 receptions for 702 yards and three touchdowns in 16 games and five starts. However, the Eagles failed to reach the playoffs.

On November 22, 2015, there was a match between the Eagles and the Tampa Bay Buccaneers – Zach Ertz caught two passes for 12 yards. A month later, Ertz's team faced the Washington Redskins in Week 16 and he registered a season-high 13 passes for 122 receiving yards. This match was lost, and the Eagles fired their head coach Chip Kelly replacing him with Pat Shurmur. In the season's final game against the New York Giants, the sportsman made nine receptions for a career-high 152 yards. He finished the season scoring 75 receptions for 853 receiving yards and two touchdowns in 15 games and seven starts.

At the beginning of 2016, he signed a five-year, $42.5 million contract extension with the franchise. Ertz opened the season as the starting tight end. Eagle's first season's opposers were the Cleveland Browns – fighting against them, Zach Ertz caught six passes for 58-yards and led his team to the victory. On December 12, 2016, having faced the Washington Redskins, the Eagles were beaten, although Zach Ertz scored ten receptions for 112 receiving yards.

The next match, the Eagles played against the Dallas Cowboys and Zach Ertz caught a season-high 13 passes for 139 yards and two touchdowns helping the franchise win. In total, the 2016 season brought Zach Ertz 78 receptions for 816 receiving yards and four touchdowns in 14 games and 14 starts. He was Eagles' best player in terms of touchdown receptions, receiving yards, and receptions.

In 2018 Zach Ertz took part in Super Bowl LII catching seven passes for 67 yards and a touchdown. The sportsman led the Philadelphia Eagles to the victory, having helped them win the New England Patriots 41–33. Remarkably, it was franchise's first Super Bowl victory.

The following match between the Philadelphia Eagles and the Carolina Panthers brought him nine receptions for 138 receiving yards. That season the Eagles advanced to the playoffs. There they fought against the Chicago Bears in the Wild Card Round. Scoring five receptions for 52 yards, Ertz helped the Eagles defeat the opposer.

Zach Ertz’s net worth is evaluated at $16 million.

Zach has a wife - Julie Ertz. The two met while getting college degree.

They got acquainted when Zach was a junior at Stanford and Julie was a sophomore at Santa Clara University. The met each other at the Cardinals baseball game.

After several years together and a handful of athletic accomplishments, Julie and Zach married in an outdoor wedding ceremony on March 26, 2017 at Bacara Resort & Spa in Santa Barbara, California.

Together, the couple posed for ESPN Magazine's 'Body Issue' in 2017.

The woman performed for America during the FIFA Women’s World Cup alongside Megan Rapinoe (who was mixed up with a scandal with Donald Trump recently which was on highlights of every sports media.)

Besides, Julie Ertz has tried out writing. So, in 2019 she released the book Chase Your Dreams. Alongside her husbands, she does charity work, donates money to schools and churches.