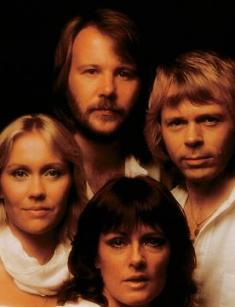 Swedish quartet ABBA flew to the top of the charts of English-speaking countries in the mid-70-is of the last century and held on to the top of fame for ten years.

This is the most successful Scandinavian music project and one of the most famous in the world. Abba songs still sound on the radio, and the albums continue to be sold out by fans.

The group consisted of two boys and two girls, and the capital letters of the names of the participants became the name of the team. Young people formed two couples: Agnetha Fältskog was married to Björn Ulvaeus, and Benny Andersson and Anni-Frid Lyngstad were in a long-term relationship and got married officially only in 1978.

When the guys were thinking of names for the band, they considered such options as BABA and Alibaba. In 1976 the second letter was turned over, making out the famous logo. Interestingly, the same name was given to the Swedish seafood processing company, so they had to ask permission from entrepreneurs to use the brand. Over the years, the members of ABBA did not change.

Agnetha Fältskog was born on April 5, 1950. The singer started her career at the age of thirteen. When she was fifteen, she sang in the Bengt Engharts "dansband." At the age of seventeen, she wrote the song Jag var så kär (I Was So in Love) that became a hit in Sweden. For her work, she chose the genre of pop music. Self-written hits provided the singer with popularity at home and abroad. Agneta collaborated with German producer Dieter Zimmerman, performing songs in German.

Björn Ulvaeus was born on April 25, 1945. When the teenager was twelve years old, he founded a musical band together with his cousin and bass guitarist Tony Rooth. They experimented with styles and participated in various competitions. From 1964 to 1974 he performed with Hootenanny Singers, who recorded sixteen albums during this time.

Benny Andersson was born December 16, 1946, and first appeared on stage at the age of eight with his father and grandfather, who played the accordions. At the age of eighteen, Benny joined Hep Stars, the most famous rock band in Sweden, as a keyboardist.

The first song "No Response" by Andersson, written in the fall of 1965, became popular. In the spring of the following year, the second song "Sunny Girl" was on top of the Swedish hit parade.

Anni-Frid Lyngstad was born on November 15, 1945, and lost her parents early. She started performing as a pop-singer in the style of "dansband" when she was thirteen. Together with a jazz band, she performed cover versions of songs by such musicians as Glenn Miller, Duke Ellington and Count Basie. When she was eighteen, she created the group that was named after her, Anni-Frid Four.

Young people, keen on music, met in the late '60s. First, the male part of the quartet started collaborating. Soon their girlfriends joined the duo of Björn & Benny. Björn and Agnetha got married, and Benny and Anni-Frid live together. A significant role in the formation of the team played Stig Anderson, who became the manager of ABBA.

The first song written by the duo for the sake of world fame, took third place on the Swedish "Melodifestivalen" (qualifying competition for Eurovision) in 1972. The single "People Need Love" was released by Björn & Benny, Agnetha & Anni-Frid, rose to 17th place on the Swedish charts and became known in the United States. Not leaving the idea of performing at Eurovision, the group, under the guidance of Stig Anderson, translated the text of the song "Ring Ring" into English.

This attempt again gave the guys only the third place on "Melodifestivalen." Another attempt in 1974 brought success to young people. Waterloo, written under the influence of English glam rock, won the Eurovision song contest, became the No. 1 hit in the UK, reached the sixth line in the US Billboard Hot 100 chart. Inspired by the success, the winners went on tour in Europe but were coldly received by the public. A distinctive feature of the famous band was the creation of a staged video clip on every single that they had released.

Only in their native Scandinavia artists gathered crowds of fans even at concerts in the open air. In January 1976, the song "Mamma Mia" became the leader in the English charts, and "SOS" – in the US. In the United States, singles became more popular than albums, so in 1975, ABBA collected six most popular songs under one cover and called it Greatest Hits.

This album included the composition "Fernando," which took the first position in the English-speaking countries of the three continents, which in popularity was second only to the song "Dancing Queen," included in the album Arrival. In 1977 the musicians who became superstars again made a concert tour in Europe, having continued touring performances in Australia. The director of ABBA's music videos, Lasse Hallström, shot a movie about their time in Australia and called it ABBA: The Movie.

The motion picture was so popular in the world box office that even the Soviet audience had the opportunity to see it, however, only in 1981. In 1978-1979 the group was at the peak of their popularity. The team invested in the equipment of the recording Studio Polar Music in Stockholm worked on new albums and toured in North America.

In 1980, the participants of ABBA, despite the excellent reception in Japan, understood that it was impossible to exploit the monotonous sound constantly. The album Super Trouper, the most famous songs of which were "The Winner Takes It All" and "Happy New Year," used more keyboard music, and the lyrics became more romantic. At this time, Björn Ulvaeus and Agnetha Fältskog decided to separate, and that was reflected in the lyrics of their songs.

In the same year, the band released the record Gracias Por La Música - hits, translated into Spanish. Since 1981, the quartet's activity started declining. Each couple was going through a rough patch, which influenced the joint work. The musicians assured their fans that the changes in their personal lives would not affect the band's activity. However, it became impossible to keep good relations within the group.

At the time of the break-up of the band, the discography of the musical quartet included eight albums. Since 1982, the girls each started their solo career, and the men were writing songs for musicals. The musical Mamma Mia! that was created based on 22 songs of the band, was adapted to a movie under the same title.

The premiere of the film brought together the legendary four in Stockholm in 2008, but even the millions of fees offered by prominent managing companies, could not tempt older musicians to resume concert activity. The members of the band never actually announced their break-up, but they no longer play together and rarely appear in public together.

In 2016, the reunited band gave the only concert in honor of the 50th anniversary of the year of creation of the legendary four. The members consider the moment when Björn Ulvaeus and Benny Andersson met the starting point of the band's history. The honorary event took place in Sweden.

At the same time, the musicians began preparing for a tour of their holograms. Together with programmers and designers, the artists plan to make the show for 2019 and send their avatars on tour. In 2018, the four musicians recorded a song that received the working title "I Still Have Faith In You."

"A real group of musicians will play on the stage. There will be a concert light, sound and everything else. The only ones who won't be "alive" there are us, but we'll be there anyway!"

– said Benny Anderson in an interview with Swedish television SVT.

After the break-up of the band, Agnetha Fältskog had been releasing solo albums for five years, after which she remained silent for almost ten years. 1996 was the year of the return of the singer in show business. Agnetha presented a book of memoirs, a collection of her best songs. In the new century, she released albums My Coloring Book and A. In 1996; the singer published her autobiography As I Am: ABBA Before & Beyond, in which she shared her experience with the fans. Agnetha now lives a measured life in the Ekerö Municipality near Stockholm, surrounded by grandchildren, dogs, and horses. Her hobbies include yoga and astrology.

Anni-Frid Lyngstad holds the titles of Dowager Princess Reuss and Countess of Plauen with the style of Her Serene Highness. She lives in the Alpine Zermatt, Switzerland, keeps being friends with the Swedish Royal family, engages in charity work that is connected with environment protection. A couple of years after the break-up of the legendary band, she released solo records, but a personal tragedy that the singer lived through in the late 90-s influenced the singer's worldview. In 1998, Anni-Frid's daughter from the first marriage died in a car crash, and a year later, her husband died of cancer.

Björn and Benny keep being engaged in music professionally. They hold their producing center. Over time, both musicians entered the ranks of the richest personalities of the Swedish show-business. Currently, they are working on the English version of Chess production, which is going to be staged in the United States and Great Britain. Benny also directs a musical group which bears his name - Benny Andersson's Orchestra. Over time, Benny has established himself as a composer whose songs become hits. His compositions are known not only in Europe and the United States but also in the charts of Asian countries. Among popular tracks of the musicians is the hymn of the European Football Cup of 1992.

One can touch the history of ABBA in the American Rock and Roll Hall of Fame located in Cleveland or the Swedish museum of ABBA (ABBAmuseet) in Stockholm. The museum, as the group itself, has its official account on Instagram, where appear fresh photos and videos of the musicians in their golden days, as well as news about the lives of the musicians.

The music of ABBA continues to be played on many stages of the world. Recently, popular hits were used in Russian cities during the Fan Fest festival dedicated to the World Cup.

In 2018, famous American singer Cher released a new album of her cover-versions of ABBA songs. The idea of making such record appeared in the mind of the singer after the participation in the musical Mamma Mia! 2 in which she played the role of Meryl Streep and sang the hit, Fernando. The movie was released in 2018.