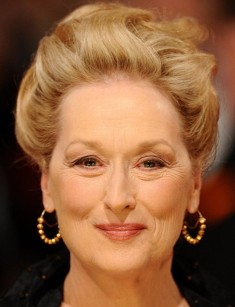 In 2013, the actress starred in the comedy film "Hope Springs", and immediately played the role in the film "August: Osage County", where she appeared along with the actress Julia Roberts.

Meryl Streep is an American theater and film actress, film producer. Experts often call the Hollywood celebrity one of the greatest representatives of modern cinema.

Mary Louise Streep, known to the world as Meryl Streep, was born in New Jersey on June 22, 1949. The celebrity is of Swiss, Irish and Dutch ancestry. Meryl spent her childhood in the atmosphere love and respect for art. Her mother was an artist. The woman brought up in her children - the daughter Mary and the sons Dan and Harry - love for beautiful things. Dad worked as a manager in a pharmaceutical company and earned money for the family. After school, the future actress began to study dramatic art in college, and then at Yale School of Drama. After graduation, Meryl Streep decided to conquer Broadway.

In New York, Meryl Streep immediately made her debut in new performances. At the Shakespeare Festival, which takes place in New York every year, the actress played in the plays "The Taming of the Shrew" and "Henry V". The first award Meryl got for the role in "27 Wagons Full of Cotton." For this work, Streep was nominated for "Tony" award.

In 1977, the beginning actress made her debut on the screen. Meryl starred in the feature film "Julia", where she played a small role. This film begins the cinematic biography of Meryl Streep. The film "Julia" received 3 Oscar awards. The young actress was noticed by the directors, who suggested the role in the dramatic military film "The Deer Hunter". Meryl didn’t want to star in the film. She agreed to participate in the film only because her boyfriend John Cazale also got the role. He already knew about his terminal illness.

When the film was released, Streep realized that this film gave her a happy ticket to the world of fame and glory. The film "The Deer Hunter" was nominated for 9 "Oscar" awards, winning 5 of them. Meryl was nominated for Best Supporting Actress and Golden Globe. Other actresses won both nominations but anyway Meryl Streep woke up famous. The actress's play got positive reviews from famous film critics. Some of them called Streep "the best actress of all time".

The following year brought Meryl Streep the role of Inga Helms - a German woman who married a Jewish artist. The mini-series was called "Holocaust." At that time the actress became even more popular, but her financial situation was not very good. Meryl did not hide that she agreed to play in the series because of money problems. The actress soon realized that it was a very good idea to play in the film. The "Holocaust" received 8 "Emmy" nominations and two "Golden Globes". Meryl received her first Emmy Award for The Best Actress.

In 1979 the actress got a lot of roles. Meryl Streep starred in 3 films at once: in the comedy "Manhattan" by Woody Allen, the thriller "The Seduction of Joe Tynan" and the drama "Kramer vs. Kramer." These films also got positive reviews. Especially the last film received many awards and positive reviews. Meryl Streep got the role of designer Joanna Kramer, who started suing her husband because of the child. This role brought the actress her first "Oscar" statuette. The critic Don Wilmott said that after this film a new star of world cinema, Meryl Streep appeared.

Having received the first "Oscar", Streep becomes popular among famous Hollywood directors. Soon the films "The French Lieutenant's Woman" and "Sophie's Choice" were released. In the last film, Streep played the role of a Polish woman with a dramatic fate, who immigrated to America during the war. For this work, Meryl Streep received the second Oscar and the third Golden Globe.

The next breakthrough in the career of the actress was the film "Falling In Love". In this film, the main role went to another famous representative of Hollywood –the actor Robert De Niro. Earlier, Meryl and Robert appeared in the movie "The Deer Hunter", which brought them fame.

One more film, in which the incomparable Meryl appeared, was the film "The Devil Wears Prada" about the inner life of the fashion world. Here, the actress turns into Miranda Priestley, the editor of the "Podium” magazine, the prototype of which was Anna Wintour. To play in the film Streep lost 10 kilograms. Again, the actress got positive reviews of critics and a new portion of the audience's love. The film received more than $ 300 million at the box office.

The image of Margaret Thatcher in the dramatic film "The Iron Lady" played by Meryl Streep, was criticized by the colleagues of the former Prime Minister of Britain. The ex-leader of the British government refused to watch the film. But the critics loved the game of Streep. In February 2012, the actress became the owner of the third "Oscar", bypassing Viola Davis.

All in all, Meryl participated in more than 60 films, almost all of which received awards of prestigious cinema guilds. 3 "Oscars", 8 "Golden Globes", 2 BAFTA awards and the star at the "Walk of Fame". Meryl Streep is the brightest star in the cinema world.

In 2009, the film "It's Complicated" was released. Alec Baldwin became the partner of Meryl Streep in this film. The romantic story was appreciated by critics, the film received prestigious awards. Meryl Streep is a popular actress nowadays.

In 2013, the actress starred in the comedy film "Hope Springs", and immediately played the role in the film "August: Osage County", where she appeared along with the actress Julia Roberts.

At 62 years, Meryl becomes the heroine of one of the issues of Vogue magazine, decorating the cover of the publication. The film actress has destroyed stereotypes that only young stars get the central place in the prestigious magazines.

The personal life of Meryl Streep is full of happy and tragic moments. During the performance "Measure for Measure", Meryl Streep met the actor John Cazale. They fell in love with each other. In 1976, they were engaged. But their happiness was short: soon the doctors discovered that John had a rapidly progressing cancer that affected the bone marrow. Meryl stayed with Cazale only the last days of his life, as she starred in the film "The Holocaust". The actress could not give up shooting because in that case, Meryl had to pay a huge amount of money. Together, the couple lived for 3 years. John died in the arms of his beloved woman.

Streep worked a lot after the death of her lover. Then Meryl met the American sculptor Don Gummer.

In 1978, Don Gummer and Meryl Streep got married. In this marriage, their four children were born: one son and three daughters. Their elder daughters Mary and Grace are also actresses, the son Hank is a musician. The youngest daughter Louise is going to be an actress.

In 2017 Meryl Streep was in the center of the scandal. The American press reported about the conflict between Meryl Streep and the Chanel house.

Karl Lagerfeld, the creative director of the brand, said that the actress refused the dress, created for her. According to Karl, Meryl was supposed to appear in this dress at the Oscar ceremony, but, according to the designer, the celebrity chose a brand that paid her for their outfit. It is assumed that the American preferred an exclusive model of the Lebanese designer Elie Saab.

According to the German fashion designer, Meryl "is looking for benefits in cooperation, not paying attention to the sympathy of the audience." The actress soon reacted to such accusations by commenting on Lagerfeld's statements.

"Lagerfeld, the famous fashion designer, slandered not only me and my stylist but also that famous designer whose dress I chose for the ceremony. Such information appeared in the media, ruining my reputation. He did it in order to humiliate me," Streep explained her position in an interview with the WWD portal.

It soon became known that Lagerfeld refused his words, but did not apologize.

" Lagerfeld did not apologize. He lied, journalists wrote about this lie, and I'm still waiting for an apology"- added the American actress.

The audience remembered Meryl's speech at the Golden Globe ceremony in 2017. At the event, the actress got a special Golden Globe Award for outstanding results in cinema.

Streep recalled how Donald Trump laughed at Serge Kowaleski, a journalist with a disability who represents The New York Times. The actress stated that she was shocked by the attitude of the future head of the state towards the media employee.

"I'm talking about the moment when a politician, who wants to be a President, laughed at a person with a disability. It broke my heart. This is not a story from a movie, but an event that occurred in real life, "Meryl said on the stage in front of the famous public.

Soon the politician reacted to the words of the actress, saying that Meryl Streep is a supporter of the former US Secretary of the State Hillary Clinton, who lost the presidential election to him. The billionaire thinks that Meryl’s critic is a result of the defeat of the leader of the Democrats.

"Meryl Streep is too overestimated in Hollywood. She does not know me personally but attacked me during Golden Globes. She just supports Hillary, "- said Trump on his Twitter.

Famous actors, who attended the ceremony, supported Meryl Streep. Famous representatives of Hollywood said that the "Golden Globe" is one of the few places in America, where people still respect the opinion of the people. 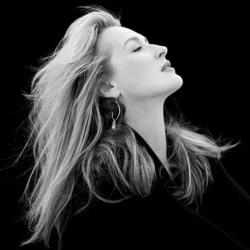