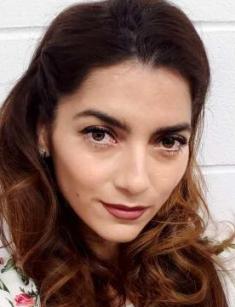 Blanca Blanco is an American actress whose filmography consists of little-known movies. The actress became famous thanks to her peculiar taste in clothes and candid outfits, which she wears at awards ceremonies. Blanca tries her hand at producing and screenwriting, but the projects organized by her have not become well known.

Blanca was born on January 22, 1981, in the small town of Watsonville, California. The family had four more children. Blanca grew up with two brothers and two sisters. The celebrity has Mexican ancestry. Her parents left Mexico to work in the USA and tried to provide the children with everything they needed in a foreign country. So, they had to hold more than one job.

When the girl was nine years old, the family moved to Chelan, Washington. Realizing that their daughter had an inclination for creativity, the parents encouraged her singing and acting skills. Blanca took private lessons and participated in theatrical performances.

After graduating from high school, Blanco entered Washington State University to study psychology and then graduated from Eastern Washington University with a Master of Social Work.

She was good at studies, but the girl hoped to connect her life with a creative profession. Having received a second diploma, she decided to move to Los Angeles, where she had more opportunities. Blanca understood that she needed to improve herself and acting skills to succeed. Therefore, she enrolled in the Gordon Hunt Acting Workshop. Later, Blanca played in his productions and even trained with Sally Kirkland.

The actress's filmography is not very diverse. Blanca was invited to appear in films and TV shows, but she did not become famous. She played roles in comedies, action films, and thrillers. In 2008, Blanco made her debut in the movie Dark Reel, then appeared in Hot Girls on the Beach. The directors did not offer her prominent roles, so the woman played bit parts and supporting characters. The most popular films with her participation are Bullet, Bermuda Tentacles, Mission Possible, The Dog of Christmas.

Blanca has appeared in dozens of projects and remains an in-demand supporting actress. So, in 2018, she participated in the shooting of 6 movies, which is a good result in Hollywood. In 2016, she was honored with the Arido Award for her contribution to the film industry. Blanco is not usually nominated for the popular awards, but she often appears on the red carpet.

Whenever the star appears in public, she attracts the attention of the paparazzi, wearing bold outfits and having a peculiar taste. Blanca had a revealing dress at the 2018 Academy Award ceremony. A long yellow sequin dress did not cover the intimate parts of Blanca's body. Moreover, she did not wear underwear. This situation was not an isolated incident. A year earlier, Blanco had appeared on the red carpet wearing a low cut dress with a long train and high slit, showing her breast.

Blanca likes to be different from others. Her courage deserves recognition. In 2018, the actress went to the Golden Globe award ceremony in a red dress, while most of the guests wore black outfits. This color was chosen to support the movement against violence and sexual harassment. Swim against the stream, Blanco explained to journalists that she loved red and it did not mean that she did not support the idea of movement.

At the Best WEB Time award ceremony, the woman surprised everyone with her clothes again; she appeared in front of the cameras, wearing a baby pink dress and high heels. The actress stood out of other stars, supporting the image of a woman of fashion who had a non-trivial sense of style.

Nowadays, Blanca Blanco lives in Malibu, California, with her husband, actor John Savage. He is 30 years older than his wife, but it did not become an obstacle to the feelings of the creative people. The actress has a happy personal life with her husband, and they easily demonstrate it in front of the camera. In 2018, Blanca accompanied her husband at the Moscow Film Festival, where Savage was a jury member.

The actress supports the American Cancer Society and participates in charity events aimed at helping people with autism and AIDS. Blanca was even a hospice volunteer.

Blanca Blanco is proud of the attractive body. The actress uses every opportunity to demonstrate her beautiful figure. Blanco is 5.74 ft. (175 cm) tall, weighing 138.89 lbs. (63 kg).

The actress often poses for magazines, wearing a bikini or lying in the snow. Blanca shares some pictures with her followers, posting them on Instagram. In 2019, she has re-created Marilyn Monroe's photo shoot.

At present, there' s no exact information about Blanca's net worth.