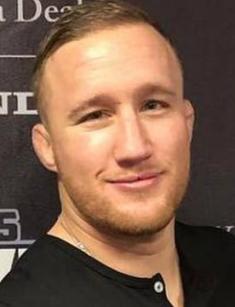 Staginess is the priority for the mixed martial artist Justin Gaethje; it is more significant than money or health. The man rarely thinks about his defense techniques and head protection, and fans are concerned about his approach. The fighter celebrates every victory with his trademark flip.

The would-be athlete was born in Safford, a tiny town in Arizona, not far from the borderline with Mexico. This area is known for its arid climate and big differences between day and night temperatures, as well as the federal prison, cotton fields, and mining companies. The boy’s father had German roots and worked in one of those mines. The Mexican mother was a postmaster.

Justin’s family was large; he had a twin brother, Marcus, and younger sisters. Although the boys were born the same day, November 14, 1988, they looked entirely different: Marcus was dark-haired, like his mother, and Justin bore much resemblance to his fair-haired dad.

As the parents remembered, the brothers started fighting earlier than walking; they found good partners in each other. To keep the house safe from the energetic twins, the father took his sons to sports clubs: wrestling and football.

As soon as Justin saw fights on TV, he fancied them. The young man had some experience in a mine where his brother worked and made sure he did not want to go there again; the ring looked much more appealing. Gaethje entered the University of Northern Colorado and studied social work there.

Justin’s height is 5.91 feet (180 cm.), and his weight is 154 32 lbs. (70 kg.); he competes in the Lightweight division and counts on his Latino-American temper rather than German prudence. The athlete tries to knock out his opponents rather than use submission.

Gaethje debuted in MMA in 2011 and joined UFC in May 2017. The audience remembers his victory over Michael Johnson and the failures against Eddie Alvarez and Dustin Poirier. The former battle was particularly tense: Michael had offended Justin’s family before the event. As a result, Gaethje announced he was going to kill Johnson in the ring and crashed him in the second round. It was the Fight of the Year in 2017.

The sportsman is not married. He likes to have new tattoos and play with his brother’s children. Justin has a dog. Fans can see photos from family celebrations on his Instagram page.

In 2016, Gaethje helped save his little countryman Jayne Wood. The athlete learned that the six-months-old child had leukemia and gave his lucky gloves for a fundraiser auction. Thus, enough money for Jayne’s treatment was collected.

The man is going to devote his life to troubled teenagers’ correctional education when he finishes his MMA career; he delivers motivation speeches to school students in his home town. When the mother asks Justin how such a kind person may be cruel in the ring, Gaethje says that fighting is his happiness and pleasure.

The rapper Keznamdi devoted the song “Champion” to the sportsman.

In March 2019, Gaethje knocked out Edson Barboza at UFC on ESPN. Although Justin’s opponent lost, he named his daughter, who was born three hours after the battle, Victoria.

Fans are looking forward to Justin’s next fight against Khabib Nurmagomedov, who was suspended until fall 2019 for the conflict with Conor McGregor after they had faced each other in the ring.