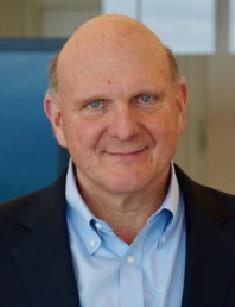 Ballmer, mostly known as a former CEO working for Microsoft company, retired in 2014. Having left the company, he turned to sports and became an owner of the basketball team Los Angeles Clippers. Besides, he does some charity work donating money to education and health care. Let’s know how Ballmer managed to build a brilliant career in the world of programming and enter the list of the wealthiest people in the world!

Ballmer was raised in the family of Frederic Henry and his wife, Beatrice. He was not the only child of them – he was brought up alongside a sister named Shelly. As for their parents’ occupations, dad was responsible for managing of the Ford Motor Company – so, his family has never had financial problems. In his future admissions, Ballmer shared that his father’s wealth inspired him for leading a rich life. So, from the very infancy he could afford expensive things, meal and clothes and it would be a shame for him not to reach high results in his career as his dad did.

Speaking about Ballmer’s race, he has Swiss roots.

While studying at school, Steve Ballmer showed impressing academic successes in mathematics and physics. Many professors have noticed his predisposition to study natural sciences. One of them has even predicted Ballmer’s future – he said the boy would succeed in business.

He entered a college to study economics and got acquainted with Bill Gates – this friendship would happen to be a fate for Ballmer.

Besides studying, Ballmer dedicated himself to sport – so, he joined a football team of his college. Moreover, Ballmer liked garnering attention and contributed to the college newspaper. He wrote mostly about science, shared his secrets of a high academic success and inspired readers to develop.

Having received his bachelor’s degree, Steve was hired as an assistant product manager of Procter & Gamble and worked there for two years. In 1979, Ballmer enrolled at the Business School.

Ballmer’s friend Bill Gates, noted above, left the school to run his own business - he co-founded the company Microsoft. Ballmer noticed his pal’s successes and asked him for a short-time job to earn some pocket money. However, Gates offered Ballmer a full-time job. So, the latter left the Business Scholl and started working as a manager in Microsoft. Interestingly, that time, he was the only manager of the firm. Ballmer was responsible for looking for appropriately qualified employees for the company. Initially, Steve was a real dummy in the programming but became a professional as time passed.

Shortly after, Microsoft concluded a contract obligating the firm to elaborate an operating system for a new line of computers of IBM. Gates and his main partners took up technical aspects of the deal, and Ballmer was in charge of handling the business.

By the year 1981, Ballmer had owned 8 percent of the company.

At the beginning of the 1980s, Allen, one of Bill Gates’ most precious partners, was diagnosed with cancer and had to stop working for the firm. So, Ballmer became the only person to be responsible for Microsoft, except for Gates. Since then, he started developing the operating system

The year 1986 happened to be prosperous for Steve. So, Microsoft advanced to being a publicly held firm making its owners, including Ballmer, multimillionaires. However, it also gave them more responsibilities and stuff to do. So, over the following couple of years, Ballmer held lots of essential seats in the company. At the beginning of 1992, he got the position of the Executive Vice President. Six years later, a new accomplishment was looking for Ballmer – he became the President of Microsoft. Subsequently, in 2000, he advanced to the position of the Chief Executive Officer (CEO).

So, he became in charge of financial issues, routine operations, and arranging conferences with partners. Due to Ballmer’s guidance, the firm elaborated new products such as electronic game console system Xbox and portable media players. Microsoft got through a successful period during Ballmer’s leadership. Its annual income increased to $70 billion. All the facts about Steve Ballmer’s tenure are described in the book Resolve and Fortitude by Joachim Kempin.

In 2014 Ballmer left the position of CEO and became a member of the company’s Board of Directors.

In 2008 Ballmer and other initiative businesspeople planned to buy the Seattle Super Sonics and move the franchise to another place. However, they failed to do it, and the team currently play in Oklahoma under the name Oklahoma City Thunder. Besides, in 2013 the group intended to buy the Sacramento Kings but also failed. After the Donald Sterling scandal appeared in 2014, Ballmer became the owner of the franchise Los Angeles Clippers (after a long rivalry with James Dolan). Remarkably, he punished his players for using Apple products, making them use Microsoft ones, according to team’s player Jerry West.

In summer 2012 Ballmer invested to building a new sports arena.

Speaking about his assets, in his times, Ballmer was named the second person (behind Roberto Goizueta) who has become a billionaire due to stock options got for working in a corporation. Nowadays, his net worth is evaluated at $40 billion.

When it comes to using such a significant amount of money, Steve Ballmer is an active philanthropist. So, his family has donated more than $100 million to educational establishments around the country to develop their conditions and increase the level of education. Besides, he has purchased new computers for colleges.

In February 2019 he was invited to Jimmy Kimmel Live Show to speak about philanthropy.

Steve Ballmer has a wife - Connie Snyder. They tied the knot in 1990 and now are parents for three children. The family currently resides in their own house in Washington.

Jack Barker, a character of the comedy Silicon Valley, resembles Ballmer by his appearance.