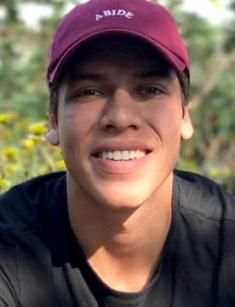 In the spring of 2011, people learned the shocking news that the Hollywood actor, politician, and bodybuilder, Arnold Schwarzenegger, who was an exemplary family man, had a 14-year-old illegitimate son from a former housekeeper. After finding such details of the Terminator’s private life, his wife, Maria, filed for divorce, even though they had four children. Now grown-up Joseph Baena is compared to young Arnold and is called the real son of Schwarzenegger.

Joseph Anthony Baena was born out of wedlock on October 2, 1997, in California, USA. His father is Hollywood actor Arnold Schwarzenegger, and the mother, then-housekeeper Mildred Patricia, is a Mexican woman, who has cooked, cleaned, and washed for 20 years.

She was practically a member of the family. At that time, the woman was married to Rogelio Baena, and the actor was married to Maria Shriver. When Joseph was born, Schwarzenegger and his wife already had four children. The TV journalist and bodybuilder were an enviable couple since 1977 because they dated for eight years and were married for 25 years.

In the 1980s, Arnold won Mr. Olympia, after which directors paid their attention to the heavy-built handsome man and began to invite him to their projects. The former athlete became the idol of millions in the blink of an eye, and his credentials included dozens of films. He amazed his fans not only with his acting and body but also with the ability to be an exemplary husband and father.

Maria found out herself that the housekeeper’s son was also her husband’s child because their physical resemblance manifested itself. Mildred's husband also learned about the extra-marital affair, and after that, the whole world became aware of it. It was rumored that Arnold did not know for a long time that he had one more child.

While this scandal was flaring up, Joseph grew up and was a curious and many-sided child. He studied well at school, was fond of sports, did charity work during his studies at the prestigious university. The young man studied business management at Pepperdine University in Malibu. He was a sports star, taking part in student festivals and sports competitions.

According to some reports, Arnold Schwarzenegger might not have acknowledged his paternity, but for the decisive pressure of his wife. Subsequently, the actor took good care of his former mistress and their child. In 2010, he bought them a house in Bakersfield, California, took financial responsibilities, and presented expensive gifts. Arnold and Joseph have recently had excellent relations based on mutual understanding. The former governor of California seems to be proud of his youngest son.

Maria and Arnold completed a divorce only six years after the official separation. The process has become a severe test for both the Terminator and Shriver, as well as for all five children. However, despite all the difficulties, the former spouses enjoy good relations and still support each other.

Joseph Baena has followed in his famous father’s footsteps, he makes fantastic progress in sports, preferring bodybuilding. On his Instagram page, the young man regularly posts photos of rest on the beach, workouts, as well as his athletic body.

During his school years, Joseph was a member of the local swimming team. Rumors have it that his father strongly supported his son's hobbies from an early age. The man gifted Baena a home gym for his 16th birthday. He also gave the legendary leather jacket which Arnold wore on the set of the second installment in the Terminator franchise. Besides, Schwarzenegger and his son take part in bike rides, have lunch at a cafe and are actively involved in sports.

In 2016, Joseph Baena decided to recreate the cult scene from the movie Terminator 2: Judgment Day, in which his father played the role of T-800. The guy took the biker’s riffle and dark sunglasses, got on a motorcycle, and went to help Sarah Connor's son. The video was directed by American video blogger Ben Hess.

Joseph Baena is not married, but until recently had a relationship with Savannah Wix. She is the beauty pageant holder of Miss Malibu 2018 and Miss Arizona. According to foreign media reports, the young people began their love affair in 2017. It is not reliably known whether Arnold Schwarzenegger’s son is in a relationship now, but it’s hard to believe that such a wealthy and ambitious young man doesn’t have a girlfriend.

There is no reliable information about his relationship with his half-sisters and brothers: model Patrick Schwarzenegger, writer Katherine Eunice, Christina Maria, and Christopher. Although as a child he often visited his father’s house to meet his mother, Arnold and Maria also saw the boy, it’s hard to believe that the former family of the actor recognized Joseph as its full member.

In 2019, the 21-year-old boy has not appeared in a movie yet, but people think that he will soon have a quick and successful start of an acting career. Now the young man is actively building up muscle, spending a lot of time with his father and mother.

On January 14, the young man posted a picture on Instagram, recreating the Terminator’s iconic muscle pose. Joseph’s strongly built body is not much different from the one shown in the 1976 archive photo of Arnold. The man wrote a joke, "Just a lil thicc." His subscribers admired his figure, wished him luck, and predicted the glory of the new Terminator.

Although Joseph has not disclosed his net worth to the public, his father Arnold has a net worth of $400 million.