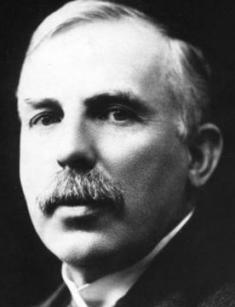 Ernest Rutherford is the scientist known as the creator of the basic principles in nuclear physics. The researcher focused on the atomic model and radioactive elements, working on the theory about the atomic number and electrons. Thanks to Rutherford’s discoveries, the planet model of an atom was created; it was one of the most remarkable achievements in the 20th century. Besides, the physicist studied nuclear radiation.

In 1908, Rutherford received the Nobel Prize for “for his investigations into the disintegration of the elements, and the chemistry of radioactive substances”. In 1925-1930, he worked as the President of the Royal Society in London.

Ernest was born in Brightwater, New Zealand, on August 30, 1871. His Scottish father was a farmer, and the British mother taught in a local village school. The boy grew up in a large family and had six brothers and five sisters.

Rutherford used to labor at a woodworking plant created by his father. The knowledge and skills from childhood helped the scientist make the equipment necessary for physical experiments.

The young man attended Havelock School and won a scholarship in 1887, which let him continue his education in Nelson. Ernest was enthusiastic about knowledge; he was interested in everything around him. The future physicist entered Canterbury College to study chemistry and physics, and teachers noticed his potential quickly. Four years later, Rutherford was awarded for the best work on mathematics and physics. Soon, the young man began to research and support his activities with experiments.

Thanks to the radio set, Ernest could receive the signals from his colleagues within the half a mile distance. In 1894, the physicist presented his results in an article for Transactions of the New Zealand Institute.

The next year, Rutherford got the highest award possible: the Research Fellowship from the Royal Commission for the Exhibition of 1851. Ernest was a possible candidate and had an opponent, but the latter could not go to Great Britain. Thus, the young man took the opportunity and joined the Cavendish Laboratory.

Rutherford’s career was developing fortunately. He became a mentee of the reputable physicist J.J. Thomson and found a guardian in him. Thomson introduced Rutherford to studying gas ionization under X-ray pressure. By 1898, the promising scientist paid attention to “Becquerel’s rays” which were the uranium radioactivity. Ernest realized it complemented positive alpha-particles and electrons of beta-particles.

Pierre and Marie Curie were researching the same phenomenon as well. The spouses presented their work to the French Academy of Sciences in 1898, and Rutherford took an interest in the idea about the existence of several radioactive elements. He drew a conclusion about a half-life period that clarified characteristics of substance and discovered the process of half-life.

In 1898, when the physicist learned about a vacant position of a professor at McGill University, he moved to Montreal, Canada. Ernest was no longer guided by Thomson and had no teaching experience; his teaching skills were poor. At the same time, the sociable scientist established useful contacts and found like-minded people ready to collaborate with him.

In 1902-1903, the partnership with Frederick Soddy resulted in the radioactive transformation law. According to the scientists, half-life periods did not lead to element modification; they could not be slowed down or stopped. Soddy and Rutherford also created the transmuting law; the Russian researcher Dmitri Mendeleev updated this information later with his periodic chart. It was revealed that substance chemical characteristics depended on their atomic number.

In 1904-1905, Ernest Rutherford presented two academic books: Radio-activity and Radioactive Transformations. He believed that atoms were the source of radioactivity and continued to study a nucleus. In this respect, the physicist conducted experiments and X-rayed gold foil with alpha-particles to see how a flow of particles would behave.

Rutherford was the first to make an assumption about an atomic model: a positively charged drop with negative electrons around. He demonstrated that Coulomb force acted upon electrons, and the latter tried to reach the center of an atom; because the balance was destroyed, radiation and fluctuating appeared.

Rutherford’s discoveries helped explain the existence of spectral wavelength. It was proved experimentally that atoms in solid objects had the same size as the looseness among them. The researched believed that a nucleus was located in the middle and had all mass of a particle with electrons moving around. Thus, the planetary model of an atom came into being.

Ernest Rutherford’s conclusions sounded convincing, but there was some disagreement. The model did not correlate with James Maxwell’s and Michael Faraday’s law of electrodynamics: accelerating charge lost energy because of electromagnetic emanation. Under those circumstances, Rutherford continued his research.

In 1907, the scientist moved to Manchester. He had already been famous for his achievements and received many invitations to international research centers. Rutherford preferred the Victoria University of Manchester and resumed his work. In 1908, Ernest Rutherford and Hans Geiger created the counter of alpha-particles.

In 1912, the physicist collaborated with Niels Bohr who invented the quantum theory meaning that atoms had their orbits. According to Rutherford and Bohr, electrons orbited around a nucleus. This model made a revolution in science and revised traditional views on the matter.

In 1919, Rutherford became a Cambridge professor and the director of the Cavendish Laboratory. His honor list was expanding, and the number of students was growing.

In 1914, the scientist received the title of Knight; in 1931, he became Baron Rutherford of Nelson, of Cambridge in the County of Cambridge. At that period, the man was experimenting on the splitting of an atom and element transformation. In 1920, Rutherford was the first to speak about the existence of deuterion and neutron; in 1933, he participated in experiments on the connection between energy and mass.

Ernest Rutherford was happily married to Mary Georgina Newton, the owner of the boarding house where the physicist lived. The spouses’ relationship went through a long time: the marriage happened only five years after the engagement, in 1895. By that time, Ernest was quite famous in the academic community. In 1901, the couple’s only daughter, Eileen Mary, was born.

Ernest Rutherford made a significant contribution to science; he became an iconic figure in his epoch. When the man was diagnosed with exomphalos, he received privileged treatment. When it was necessary to have head surgery, only a distinguished surgeon could do that.

Rutherford’s condition was getting worse. The search for a suitable doctor took too long and led to the physicist’s death. He died on October 19, 1937. Rutherford was buried in Westminster Abbey.

Today, the scientist remains a prominent figure in physics; his portraits may be seen in academic books, technical universities, and museums.