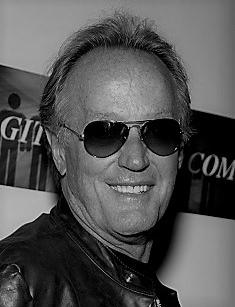 Fonda’s recent death shocked everybody around: from his colleagues to his fans. The celebrity had several unreleased projects and was to star in a couple of pictures, but his fate thought differently. Read Fonda’s full biography in the article!

Peter Fonda's birthplace is New York. He was raised in the family of Henry and his spouse named Frances alongside an older sister named Jane. His mom was found dead after committing suicide in an insane asylum. However, Peter became aware of the real details of her death only five years later.

At the age of 11, Fonda shot himself by accident – and he would be dead now if it wasn't for doctors. He recovered in 2 months. Later, when Fonda got acquainted with John Lennon, he shared this story and inspired the musician for creating The Beatles’ track "She Said She Said."

Having returned to his motherland, he began working at a local theatre. Later, he became a real star of Broadway. Around that time, he also acted in such TV programs as The Defenders, Wagon Train, and Naked City.

1963 was marked by Fonda's first role in a movie – he was cast of Tammy and the Doctor. The same year, he got the role in The Victors – the picture about a war. For his appearance, the actor was awarded by several honors. Following projects, Fonda appeared in were 12 O'Clock High and Arrest and Trial. Professional producer noticed Fonda's talent when he played in the latter and offered him to join the cast of Lilith. The celebrity received mostly positive reviews from actors and critics. 1964 brought Fonda appearance in The Young Lovers.

In 1966 Peter Fonda added The Wild Angels to his filmography. Initially, he took part in the audition to get a secondary role but eventually was seen acting as a protagonist. Generally, the picture happened to be a huge success bringing its directors a massive amount of money.

The following year, fans could see him among actors of the picture named The Trip. Besides, he appeared in Spirits of the Dead.

In 1974 Fonda played in the picture entitled Dirty Mary, Crazy Larry and directed his own movie Open Season. Three years later he appeared in Outlaw Blues.

As for Fonda's recent works as an actor, in 2007 he was cast of the picture Ghost Rider. 2008 brought him a role in the movie entitled Japan. He also added such pictures as Copperhead in 2013 and Borderland in 2017 to his filmography.

In the late 1960s, the celebrity began working alongside Dennis Hopper on producing and screenwriting for Easy Rider. Its plot is about two friends-bikers who travel around America and find cruelty for their unusual rock style.

Columbia pictures helped in the show's launching. In 1969 the movie was shown on screens for the first time and brought its creators recognition worldwide.

So, Peter Fonda's first project as a director was crowned with success, and he decided to carry on doing this activity. So, he went to direct the movie named The Hired Hand. Besides, Fonda acted in some episodes of the picture. As for the project's feedback, it gained mixed reviews and didn't bring its creators much money.

In 1973 Fonda contributed to the world of cinema by directing the movie Idaho Transfer without acting there.

In 1979 he got back to directing again, releasing the picture Wanda Nevada evoking big scandals.

Moreover, in 2017 he was mixed up with a political scandal. So, he criticized Donald Trump for measures he took to lower the level of immigration to America. Expressing his opinion, the celebrity used inappropriate words and had to apologize in public after being criticized for his rude speech.

Fonda had a wife named Margaret. Before, he had been romantically linked with Susan Brewer and Portia Crockett.

As for the relationship between Peter and Margaret, they got acquainted in 1975 and became close friends. Her dad was against their friendship.

Fonda was a father of two children – a daughter and a son.

In the 1960s Fonda became addicted to LSD and grew his hair long.

In his life, the star has had several law problems. So, in 1966 he was accused of taking part in a street riot and spent several hours behind bars.

Due to his style of playing, Fonda was compared with Clint Eastwood.

By the moment of his death, his net worth had been estimated at $40 million.

Peter Fonda's birthdate is August 16, 2019 – he passed away because of lung cancer. He started smoking cigarettes at an early age.