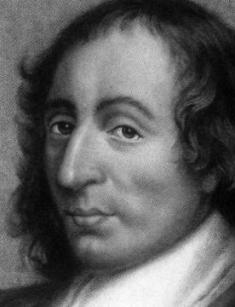 Napoleon said he would make Blaise Pascal a senator; Leo Tolstoy called him the person with the great mind; Ivan Turgenev admired the scientist’s nobility. Pascal’s achievements became fundamental for the next generations. He stood at the origins of informatics, proved the existence of atmospheric pressure, and created a summing machine – the prototype of a calculator.

Many people remember his portrait in textbooks, but the genius is equally famous for his philosophical works made of wise quotes and aphorisms.

The future scientist was born on June 19, 1623, in Clermont-Ferrand, central France. He grew up with two siblings; the family belonged to the bureaucratic semi-nobles. The father, Étienne Pascal, was the assessment committee chairman, The mother, Antoinette Begon, came from the family of a steward and kept the house; she was a religious and kind person.

When the boy was three, the mother died. Étienne was good at mathematics and discovered the limaçon of Pascal; he home-schooled his son, who proved to be curious and intelligent since his early years. His childhood bears some resemblance to that of Leibniz. Blaise wanted to study ancient philosophers’ and historians’ books, but the father believed the boy’s studies should correspond to his age.

Thus, young Blaise was supposed to learn ancient languages at 12 and begin to study mathematics three years later. Still, the boy was eager to make acquaintance with the latter and kept asking his father about adding and subtracting. However, Étienne believed the early interest in mathematics would worsen the results in Latin.

One day, Blaise asked his parent what geometry was, and he explained it was the way to trace figures and find proportions among them. Impressed by the short reply, Pascal took a piece of coal and started drawing triangles, squares, and circles; he called lines “sticks” and circles – “rings”.

The 14-year-old teenager violated his father’s instructions and began to visit the lectures of the famous French mathematician and music theorist Marin Mersenne. Mersenne maintained correspondence with many great minds: Galileo Galilei, Evangelista Torricelli, Pierre Gassendi, and others. He managed to steer on the right course Pascal, René Descartes, and Pierre de Fermat.

Pascal met the geometrician Girard Desargues at a workshop and began to study his works. Desargues’s manuscripts were challenging to read, and Blaise took inspiration from them but made those formulas simpler.

Further on, the 17-year-old young man debuted with Essay on Conics, the fundamental work for further geometric studies, in 1640. The third lemma is the Pascal theorem that helped create a canonical cut with five dots.

The same year, in winter, Blaise moved to the capital of Normandy, Rouen. He worked in his specialization and made exhausting, monotonous long calculations. Blaise tried to make his father’s work simple and came up with the idea about a summing machine. In 1642, he was making the apparatus; it looked like a box with numerous cogs and allowed to calculate six-figured numbers in a semi-automagical regime.

However, the invention did not bring fame. At that time, France used the monetary system with livres, sous, and deniers in its taxation matters, and the machine with the decimal system only made the process complicated, even though Pascal kept trying to enhance it for ten years.

Nevertheless, Pascal’s invention was the key to other scientific works. At the end of the century, the country switched to the metric system. In 1820, Charles Xavier Thomas presented the first mechanical calculator and gained much money for it.

At the end of 1646, Blaise learned about Torricelli’s pipe and took an interest in physics. He started carrying out experiments and proved that Aristotle’s hypothesis about the “fear of empty space” was limited.

The Italian genius Torricelli filled a pipe with mercury to prove the existence of the atmospheric pressure. As he immersed the pipe to mercury, vacuum appeared inside. Blaise changed the experiment and concluded that the upper part of this pipe was not filled with chemical vapor or any other substance. The results were presented in New Experiments with the Vacuum (1647).

Apart from that, the physicist released Account of the Great Experiment on Equilibrium in Liquids (1653), formed the idea of a water press, and discovered the main law of hydrostatics named after him; it opposed the ancient teachings.

In 1651, the scientist’s father died; his sister and friend Jacqueline left the secular world and went into the convent. To distract himself from the pain, Blaise began to go out more often. In 1652, he presented his arithmetic machine to Christina, Queen of Sweden and received much recognition.

The success encouraged the mathematician; he was interested in science, fame, and social life. One could frequently see him among friends or gambling. As Pascal and Pierre de Fermat were watching the game of dice, they laid the basis for the probability theory; Christiaan Huygens was excited about it and created On Reasoning in Games of Chance (1657).

Blaise Pascal is known as a mathematician and physicist mostly. Few people know he resigned from science and preferred philosophy. In 1654, the scientist was going to write a new treatise on mathematics, but a stroke of insight happened to him one night. After a subconscious flow of thoughts, Blaise began to write his ideas on the nearest piece of parchment paper and then had it sewn in his clothing foundation. These notes named Memorial were discovered only after Pascal’s death.

The yesterday’s scientist decided to leave Paris and become a personal priest in a Port-Royal monastery; he considered all his social contacts, that promised a happy life, to be sinful. Pascal was accepted. The man’s new lifestyle was harsh: little sleep and constant praying; however, he felt much better and elevated.

Pascal had many discussions with the Jansenists and Jesuits who promoted moral values in a rational way and created Lettres Provincials. The treatise was published under a pseudonym and criticized casuistry. This work provoked a public outcry, and Pascal could have been imprisoned; he hid away and lived under a different name for a while.

The opponent of pretentious religiousness, Voltaire appreciated the manuscript and noticed that Jesuits looked not only disgusting but also funny in this text. Further on, Pascal continued to talk about mathematics with his friends and began to study a cycloid to take his mind off of his aching tooth.

The scientist made his next discovery reluctantly; it took him one night to solve the Mersenne problem. He did not want to present his results publicly, but his friend, Duke de Roannez, had a competition for European geniuses: they had to determine the gravity center and rotation body area of a cycloid.

Although many great minds tried to find a solution, the jury decided Pascal’s approach was best. His manuscript influenced the differential and integral calculus.

Despite the scientific triumph, Blaise did not quit philosophy and presented Defense of the Christian Religion to criticize atheists. Still, the writing was difficult for him, and various life situations proved to be a sticking point for it.

Pascal’s religious views were changing through time, so various texts had different genres and content. Later, these manuscripts were included in the collection Thoughts of M. Pascal on religion, and on some other subjects; the writer was reflecting on the First Sin and the personality of Jesus Christ.

Blaise Pascal is known for the argument that religious faith was rational. According to the philosopher, it is risky to live without faith: if God exists, an atheist will be doomed to eternal suffering – otherwise, it is a loss. The victory price is not great, though: if religious teachings are false, the lack of religion gives no benefit.

One can understand Pascal’s character reading his philosophical books. Science was the only love of his life; the man lived an ascetic life and had no wife and children.

Blaise’s health was weak. There is a legend that the three-year-old boy was cursed by a beggar.

Étienne believed in magic; as soon as he suspected something wrong, he found a witch and made her relieve his son from the curse. The spell was transferred to a black cat, but Pascal continued to feel sick for the rest of his life. For instance, his heart rate increased so much one day that he almost fainted.

Pascal believed his heart disease was caused by idleness. According to some manuscripts, he had many disorders, from brain cancer to spine issues. People compared the 37-year-old scientist with an old man. Blaise did not listen to doctors’ recommendations and continued scientific research and writing, even though they were draining energy from him. The physicist realized he was on the edge of his death but felt no fear.

Pascal’s health was deteriorating each year, and doctors could not cure him. Besides, the scientist was diagnosed with tuberculosis colitis.

The man died on August 19, 1662, at the age of 39. The lunar crater, the university in France, and the software programming language Pascal were named after him.

“The strength of a man’s virtue must not be measured by his occasional efforts, but by his ordinary life.”

“It is not in Montaigne, but in myself, that I find all that I see in him.”

“Man must not be allowed to believe that he is equal either to animals or to angels, nor to be unaware of either, but he must know both.”

“'It is superstitious to put one’s hope in formalities, but arrogant to refuse to submit to them.”

“Can anything be stupider than that a man has the right to kill me because he lives on the other side of a river and his ruler has a quarrel with mine, though I have not quarreled with him?”