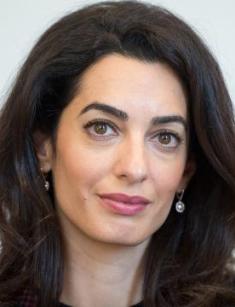 Amal Clooney (Alamuddin) is a British attorney, social and human rights activist. Amal was born on the 3rd of February of 1978 in the capital of Lebanon in the intelligent family of Ramzi and Bariaa Alamuddin. The girl 's grandmother became famous for the fact that she had been the first educated woman in Beirut – she received education at State University.

The parents of Amal were engaged in the intellectual work: his father was a teacher at Beirut University as a professor, and her mother worked in Al-Hayat publication as an editor-in-chief. In a short time after their first daughter’s birth, the family of Alamuddin had to leave the country as there began the fighting in Lebanon.

In London, three more children were born in the family of Ramzi and Bariaa: one daughter and two sons. Amal 's parents gave her an excellent education. The girl received education at best London 's school and then was enrolled to St. Hugh 's College at Oxford University for the Faculty of Law. Alamuddin distinguished with industriousness and diligence in her studies. Amal preferred to spend evenings with the book to visiting parties. After the girl had graduated from college, she went to New York for advanced training at Law School. Amal Alamuddin graduated with a red diploma and got great recommendations.

Amal Alamuddin was intended to have a career from her youth, that's why in 2004 the girl got a job at United Nations International Court of Justice. At the same time with her human rights activities, Amal received a Certificate of Lawyer Profession for the Kingdom of Great Britain. In 2010 she relocated to London, where she became the employee of Doughty Street Chambers law organization. Alongside with this, Amal continues to take part in international processes.

Alamuddin takes on the job of defending the rights of the Government of Yugoslavia at International Criminal Tribunal, advises the General Prosecutor'ss Office of the Special Tribunal on Political Crimes in Lebanon. After the high-profile investigation of the murder of the Prime Minister in Beirut, Amal published the work by The Special Tribunal for Lebanon: Law and Practice.

Amal defended the interests of Cambodia Government in the arbitration court in the territorial dispute with Thailand. Also, the former Prime Minister of Ukraine Yulia Tymoshenko needed the assistance of the famous attorney. Yulia was accused of the abuse of her official authority and could be sentenced to 7-year imprisonment. Amal filed a case before the European Court of Human Rights in defense of her ward.

When there began the Interpol prosecution of Julian Assange on the case of the publishing secret American documents on the website of WikiLeaks non-profit organization, Alamuddin started to defend the Australian. This trial turned out to be one of the loudest cases in her attorney's biography. In the East, people also needed the assistance of the human rights defender. During the ‘’Arab Spring’’ which burst out in Egypt, the journalist Mohammed Fahmi was accused of being an accessory of the terrorists. Amali 's tries to defend the journalist’s rights in the court were futile – the authorities sentenced Fahmi to 7 years of imprisonment.

Amal is a teacher at the university - Alamuddin curates the Human Rights subject.

Amal Alamuddin has received recognition as the most beautiful attorney in the world. Her jauntiness, gorgeous figure and high height (174 cm) combine well with her flawless taste. The photos of Amal Alamuddin regularly appear in the fashion editions as an example of the perfect clothing style which is worth looking up to it.

The girl inherited her gorgeous appearance from her mother. There is information that the Arab poet Said Akl admired the sparkling beauty of Bariaa Alamuddin; he dedicated her his poetry. In Beirut, Bariaa was called the second Elizabeth Taylor.

In 2013, Amal Alamuddin began to work on the case of tracking the terrorists on the launches of the space satellites. While she was working on the case, the attorney met the Hollywood actor at the same time the public figure - George Clooney.

Real feelings lit in the heart of the not young womanizer, who repeatedly told in the interview that he would never get married. But the beautiful woman suddenly refused to George’s proposal to have an evening date.

Clooney didn’t achieve Amali’s attention at once, but after a while, people already saw them together. At the end of September 2014, Clooney and Amaluddin got married.

Their solemn wedding ceremony took place in Venice. The mayor of the Italian capital attended their wedding. After the wedding, George presented his wife a weekend house in one of the administrative districts of Great Britain. Amal published a photo from the wedding ceremony on her Instagram page, where she has 117,000 subscribers.

At the end of 2016, there spread the news in the world media about the fact that George Clooney 's wife was pregnant. According to the scan, it was obvious, that the future mother was expecting not one baby, but twins, what became a pleasant surprise for the spouse.

Such a responsible state didn’t prevent Amal Clooney from realizing her professional activities. In March of 2017, Amal took part in the UN meeting on the case of terrorist organizations’ activities in the East. In April, she went on a trip to Athens on the case of the artifacts.

On the 6th of June of 2017, Amal Clooney gave birth to two children – son Alexander and daughter Ella at Kensington Wing of London 's Chelsea and Westminster Hospital. Her caring husband rented a whole wing in this hospital for her. At present George and Amal Clooney continue to get congratulations and gifts regarding the birth of their heirs. They get congratulations and gifts not only from their friends and relatives but from their fans as well.

At present, Amal's net worth is about $10 million.