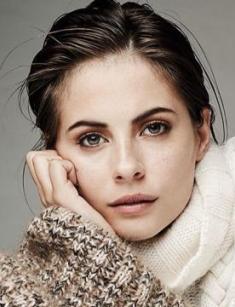 The Hollywood actress and model Willa Joanna Chance Holland was born and grew up in the family of creative people, having begun her career at the age of seven. At first, she started her career rather like a model, but she also had early acting experiments. The critics noticed her natural manner of acting at once, and her first significant role at the adult age brought her fame.

Willa Holland was born in the USA (Los Angeles) in 1991. She was the second child in the family of the moviemaker Keith Holland and actress Darnell Gregorio-De Palma. But in a short time, her parents divorced, and two sisters (the elder sister Brianna Holland was born in 1988) spent their childhood in the United Kingdom.

But already during this period, she succeeded in appearing in a bit role in the movie Mission: Impossible directed by her stepfather - Brian De Palma. It was Steven Spielberg, who was the first to notice the bright acting skills of the girl. He recommended her stepfather to organize her future in the filmography.

In 1996, in the marriage of her mother with De Palma, Willa began to have a younger sister, Piper De Palma. What about the British actor Tom Holland, who became famous after the role of Spider-Man, he isn’t related to the American actress – they just have the same surname.

In 1998 Willa became a model and demonstrated luxury clothes, perfume, and accessories of Burberry brand from the United Kingdom. Her career took off and already in a year the girl was shot for the covers of the glossy magazines, and a year later the girl was already shot for her covers glossy magazines TeenVogue and CosmoGirl! For the time of her work in the model business, the future actress managed to demonstrate on the runway such global fashion giants as Guess, Ralph Lauren, Abercrombie & Fitch, and Gap.

Willa Holland finished her ’’runway’’ period in her biography in 2001 when she played the role of little in the movie Ordinary Madness (the title in the hire - Ordinary Madman). In 2005, she acted as Kalla in the comedy series The Comeback, and the next year she took part in the voice-over of the computer game which was based on the movie Scarface: The World Is Yours.

Willa began to be actively engaged in the shootings since 2006-2007 after the role of Kaitlin Cooper in the series O. C. The actress was a great fan of this series even before the audition for this role. This is probably why she was so bright in this role. Next year after the character if Kaitlin Cooper there followed the parts of April from Garden Party, Taylor in Middle of Nowhere, Kelly from Genoa and Agnes Andrews from the series Gossip Girl which came to an end in 2012.

Since 2009, alongside with the shooting in Gossip Girl, Willa managed to become the part of the cast of Legion and voiced over the character of Aqua the computer game Kingdom Hearts. In her filmography, she also had roles in the movies Straw Dogs and Tiger Eyes. For her role of Devi in this movie, the actress gained the title of Best Actress in 2012 at Boston International Film Festival.

Her most famous role is Thea Queen from the TV series Arrow and The Flash. In 2012, the actress transformed into the character Veronica in the movie Pacific Standard Time and participated in the shootings of two projects: the documentary short movie

Humanity's Last Line of Defense, which came out in 2010, and one of the releases of the very popular American TV show entitled Fashion Control.

At present, Willa Holland is single. She lives in Los Angeles, improves her acting skills and dedicates most part of her time to work. So, in particular, for the shootings in Genoa, she has mastered the piano to make the scenes in which she is playing this musical instrument look more convincing. The admirers can follow the news from the actress 's private life on her account on Instagram.

The actress has a slender figure (she is 1.68 m tall, and she weighs 56 kilos) and has mastered a flawless taste during the period of work at World Fashion Houses. Therefore, the star’s photos and outfits are considered brought up during work in the world fashion houses are considered to be the ones of the most stylish in modern Hollywood, even if we talk about a simple photo in a swimsuit.

In 2019, Willa finished her work on the voicing – over of the character Aqua in the third part of the computer role-playing game Kingdom Hearts.

At present Willa has a net worth of $5 million dollars.