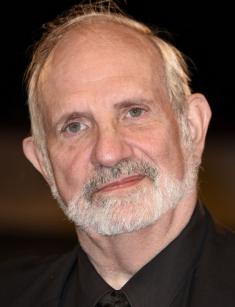 Brian De Palma is considered to be one of the most significant directors of the new generation. Fans recognize the unique visual style from the first frames of his films, the style that always remains on top, regardless of the overall quality of the movie. In the career of the director, there were both world-class high-grossing movies and failed films, but the influence of De Palma on the world's filming industry is difficult to overestimate.

Brian Russell De Palma, the youngest of three children, was born on September 11, 1940, in Newark, New Jersey, the United States, to an Italian family. They moved around a lot, and as a child, Brian lived in Philadelphia, Pennsylvania, and New Hampshire.

The boy did not get on well with his father, an orthopedic surgeon. At one point, Brian even followed him in an attempt to catch him cheating on his wife, later it would inspire the character of Peter Miller from the movie Dressed to Kill.

While studying in high school, the young man was far from the filming industry, he was fond of computer technology and even received a regional scientific award for the project entitled "An Analog Computer to Solve Differential Equations." After receiving a school education, Brian enrolled at Columbia University to the faculty of Physics, but the scientific biography of the young man had hardly started when it came to an end.

The cinematography struck Brian while studying at the University – after seeing Citizen Kane, created by the great Orson Welles, De Palma could not get the thoughts about filming out of his mind. After that, he attended Sarah Lawrence College as a graduate student in their theater department, where he received his bachelor's degree.

His acquaintance with the young Robert De Niro led to the creation of the movie The Wedding Party. This film was filmed in 1963 but came out only six years later, after De Palma became known enough in cinematic circles. Brian's debut is impressive because he used the techniques of silent film and jump-cut in the editing process.

The most significant works of the director in the 1960s were the motion pictures Greetings (1968) and Hi, Mom! (1970) starring Robert De Niro, who by that time hadn't reached today's popularity yet. The film Greetings was shown at the 19th Berlin International Film Festival, where it won a Silver Bear award, the first award in the filmography of De Palma.

In 1970, the Director began to try himself in Hollywood. The first work of Brian in Hollywood was the film Get to Know Your Rabbit, but later he was dismissed from his director's position because of disagreements with colleagues.

After an unfortunate experience, De Palma created several independent films, including the motion picture Sisters about conjoined twins, shot in the genre of psychological horror-slasher. The director got the inspiration for the plot from the story of the Soviet Siamese twins Masha and Dasha Krivoshlyapova, and the art of Alfred Hitchcock profoundly influenced the film, Brian even persuaded the composer who worked for Hitchcock, Bernard Herrmann, to write the music for the film.

In 1976, De Palma created the film Carrie, which had more impact on the history of modern literature than on the cinematographic world. The basis for the picture was the novel Carrie, written by at the time aspiring writer Stephen King. The first significant work of "the master of horror," was released two years before and gained much appreciation neither from the readers nor the critics. However, the effect produced by the film of De Palma aroused interest to the work of the writer and contributed to the success of his future career.

A fun fact: the auditions for Carrie coincided with the casting for Star Wars by George Lucas, so the actors, who were turned down by one director, often went to another, and there was a kind of "interchange" of contenders between the two colleagues.

The positive reviews of critics and the commercial success of Carrie allowed De Palma to return to the projects that he had wished to implement before. Inspired in his youth by the novel The Demolished Man by Alfred Bester, the forerunner of the cyberpunk genre, Brian in 1978 shot the science fiction thriller The Fury starring Kirk Douglas. Now the film is considered a landmark for the cinematography, and Stephen King made it into the list of the most important works of the genre from 1950 to 1980.

The next decade passed for the director under the sign of gangster films. Among the works of this period the motion pictures Scarface, The Untouchables, and Blow Out were the most essential in the director's career. For these works, which for a long time set the tone for the movies on similar topics, the participants of the filming process received many awards and nominations for prestigious film awards.

Despite the controversial reviews (from admiration to ultimate rejection), the audience was always fascinated by the dark movies about cruel criminal reality, and that ensured good results at the box office.

In the 1990s and 2000s, De Palma tried to return to the genres of thriller and science fiction. The results were mixed: some movies became very popular, such as Mission: Impossible, and a total failure awaited others. However, the film Femme Fatale (2002) starring Rebecca Romijn and Antonio Banderas, which failed at the box office, became a cult film among "cinemaholics".

In 2007, Brian's movie Redacted, loosely based on the 2006 Mahmudiyah killings by the US Army soldiers in Mahmoudiyah, Iraq, failed miserably. The film critics "ripped" the motion picture to smithereens and accused the director of bias and misinterpretation of facts.

The movie had a small budget, $5 million but it hardly grossed $1 million at the box office. Besides, under the influence of the film cuts, in 2011, Albanian Arid Uka shot two American pilots at Frankfurt airport, although the clip on YouTube that he watched was not made from the newsreel cuts.

Brian's love life has been as eventful as his creative one: De Palma has been married three times and has two children. The first wife of the director was actress Nancy Allen; their marriage lasted from 1979 to 1983. Eight years after the divorce, the man got married for the second time, to Gale Anne Hurd. From this relationship, which lasted for two years, the director had a daughter, Lolita De Palma, who was born in 1991.

His third marriage with actress Darnell Gregorio also lasted two years and gave Brian a second daughter Piper De Palma, born in 1996. She, like her father, is passionate about the film industry and now is trying herself in acting. In January of 2019, the drama film Spiral Farm was released, and the director's daughter played the central role of a girl who grew up in a commune, separated from the rest of the world.

Brian De Palma has a net worth of $40 million. In 2017, Brian De Palma began working on another thriller film Domino, telling the story of a police officer from Copenhagen, who is investigating the murder of his partner. While little is known about the film, on the Internet there are a lot of photos from the set.

In the summer of 2018, after the sex scandal around Harvey Weinstein, the director announced that he was going to make a horror film inspired by this story. Now it is only known from Brian's interview to Le Parisien that the horror movie's plot is going to revolve around the rapist. Given the experience of De Palma in creating films of such genre, fans rightly expect that the movie at least will be a subject of heated discussions of both critics and viewers.