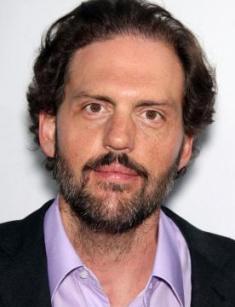 Silas Weir Mitchell is an American actor, producer, and director. He is particularly famous on television; the role of Monroe in the fantasy series Grimm.

Silas Weir Mitchell Neilson was born on September 30, 1969. The boy was named after his great grandfather, who worked as a neuropathologist; today, Silas likes to play psychologically unstable characters.

Mitchell attended The Montgomery Country Day School and graduated from St. Paul’s School in 1987. Further on, the young man continued his education at Brown University in Rhode Island, where he studied theater and religion, and the University of California San Diego. The would-be star settled in New York and debuted on the theater stage.

TV projects followed soon; the first roles in 24 and Cold Case and were episodic. When the actor auditioned for the role of the main character in Prison Break, Robert Knepper surpassed him; Mitchell received the part of the insane prisoner Charles “Haywire” Patoshik.

The notable recognition came in the 2000s. Silas appeared in the movies Rat Race and The Whole Ten Yards and personified weird guys there; such characters were often present in the young artist’s career: The X-Files, Dexter, The Mentalist, Law & Order: Special Victims Unit.

The recent years have been not so lucky and brought few lead parts. In 2011, the series Grimm became a breath of air for Mitchell: he was personifying the extravagant watch-maker Monroe for seven years. Monroe is also a mysterious creature that bears some resemblance to a werewolf; he tries to control his natural instincts and behavioral patterns. The actress Bree Turner played his wife, Rosalee Calvert.

The project finished in 2017; it was a valuable experience for the whole cast. Many former colleagues continued to stay in touch; Silas is on friendly terms with David Giuntoli.

When Grimm was broadcast, the audience was talking about the possible romantic relationship between Mitchell and Turner. However, the actor had already been married by that time.

Silas prefers to keep his personal life secret; he tries to protect his wife, from too many interviews and intrusive paparazzi. The actor is not fond of social networks, unlike his wife: she has personal accounts and even her own website on the Internet.

K.K. Dodds is also a public person: she is an actress. The couple met at the movie set of Prison Break. Today, the spouses happily live together. They have no children, but two cats and a Doberman Atticus make a pleasant company.

Today, the actor is working on new projects; fans will see him soon in the series Paradise Lost.