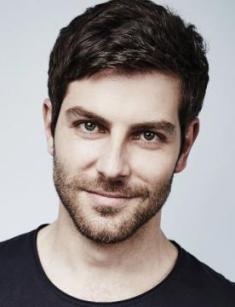 One can hardly believe it, but David Giuntoli did not dream of becoming an artist. He became a financier in training and could have followed this path if it had not been a popular youth show he took part in. Thus, the world welcomed the new star who is mostly known for his role in the series Grimm.

David Giuntoli was born on June 18, 1980. He has Italian, German, and Polish roots. The boy spent his early years in Milwaukee, Wisconsin, but the parents decided to move to a larger city, St. Louis, Missouri. This is where the young man lived until the end of middle school.

Speaking about his school years, David remembers he was too short and clumsy, so sports were not his cup of tea. The young man liked to act, yet he did not saw himself as a future artist. Giuntoli studied business at Indiana University Bloomington and graduated in 2002 with a bachelor’s degree.

2003 began the future star’s career on television: he joined the reality show Road Rules: South Pacific on MTV. The success inspired David to continue acting, and he moved to Los Angeles soon after the project finished. The Echo Theater Company founded by Chris Fields gave Giuntoli the chance to polish his skills.

The artist started with episodic roles in the popular series Ghost Whisperer and Grey’s Anatomy. Still, the handsome, charming young man remained in the shadows for a while; his talent sparkled only when he joined the cast of Grimm. Claire Coffee, Russell Hornsby, and Sasha Roiz participated in the series as well. The TV drama tells the story about Detective Nick Burkhardt, who has to investigate a chain of mysterious crimes. Giuntoli began to go to the gym for the series; today, he looks athletic and attractive. The man’s height is 5.91 feet (180 cm.); his weight is 167.55 lbs. (76 kg.).

In 2016, the audience enjoyed another project with David Giuntoli and Claire Coffee, the comedy Buddymoon.

The man met the American actress and model Cara Zavaleta at the set of Road Rules: South Pacific; their affair finished with a break-up, though. Further on, Giuntoli tried to keep secret his personal life.

In December 2014, fans learned the news about David’s romance with the actress Bitsie Tulloch, who played his fiancée in the series Grimm. The artists started dating when their characters were at variance; the celebrities were just friends up until that moment, and Bitsie even helped her colleague find the clothes for a date.

The daughter Vivian was born in February 2019. Bitsie shared a cute picture on her Instagram page: her own hand and that of the newborn girl.

Nowadays, David continues to participate in various projects. He is currently working on the drama series A Million Little Things broadcast on ABC. Besides, March 2019 brought a family comedy Mother’s Little Helpers; the man gained one of the lead parts.