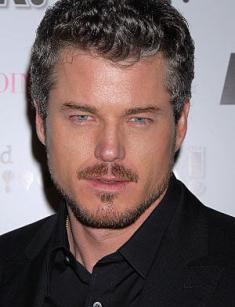 Eric Dane is an American actor who gained recognition mostly after his appearance as Jason Dean in some Charmed episodes. Among his recent projects, there are The Last Ship (2014–2018) and Euphoria (2019). By the way, Dane is often compared to some famous people because of the similarity of appearance. When Dane does not wear his beard, he looks similar to Brad Pitt. And opposite, when Eric is not shaved, he looks like an actor Taylor Kinney or Blake Shelton, a singer.

Eric Dane was born in California in 1972. His mother was a housekeeper, and his father William Melvin worked as an architect. When Eric was at a very young age, only seven years old, his dad died because of a gunshot. Dane also has a younger brother, and they both were raised by their mother.

Speaking about Eric’s education, he attended Sequoia High School and San Mateo High School. During his time at school, Dane was an athlete and also a member of a water polo team. Once, he appeared in a school play All My Sons, and that was the beginning of Eric's acting career.

Dane made his debut in movies when he starred in The Basket in 1999. After a little break, he appeared in X-Men: The Last Stand and Open Water 2: Adrift as the main character. In 2006, Eric starred in the LGBT film Wedding Wars which depicted two brothers, and one of them was gay. In 2010, the actor appeared in Valentine's Day together with Patrick Dempsey.

Dane's acting career started on the television. In 1993, he went to Los Angeles and began appearing in various TV series, including The Wonder Years (1993) and Married... with Children (1995). In 2000, Eric in a first time starred in the series not only for one episode, and it was drama Gideon's Crossing. In 2003–2004, the actor had a more significant role as Jason Dean in Charmed.

Besides series, Dane also starred in television films, for instance, two biographical movies: Serving in Silence (1995) which is about the life of Colonel Margarethe Cammermeyer and Helter Skelter about the criminal business of the Charles Manson Family.

In 2005, Dane appeared as Dr. Mark Sloan in the second season of the series Grey's Anatomy. His work got a lot of positive reviews, so Dane’s role became a regular one. At the end of the eight seasons, the actor left the show. In 2012, Eric joined the series The Last Ship which was airing in 2014–2018. Dane also worked as a producer of this show.

In 2004, Dane married Rebecca Gayheart, an actress, and a model. The spouses have two kids together: Billie Beatrice Dane and Georgia Geraldine Dane. Last year, Rebecca filed for a divorce, and unfortunately, the lovers separated. However, they remained friends, and Dane is not bored: he travels a lot, for instance, he was in Rome recently, works on his new projects and so on.