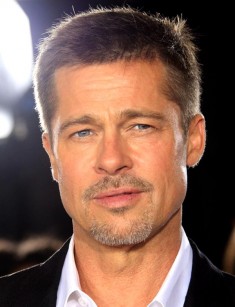 The real name of the famous American actor Brad Pitt is William Bradley Pitt. He was born on December 18, 1963 in a small town Shawnee, Oklahoma. A guy grew up in an ordinary religious family of Americans. Brad's father William Pitt worked as a manager in a large cargo transportation company, and his mother Jane Etta Hillhouse was a teacher.

But the early biography of Brad Pitt began in Springfield, where the family moved after his birth. The brother of Brad Dag was born 3 years later and in 3 years his sister Julia was born.

At school, young Pitt was actively engaged in sports, went to a music club and was a participant of student administration. After graduation, the young man became a student of Columbia University, where he studied journalism with a focus on advertising. However, Brad did not work as a journalist. After graduation from the university, the guy decided to conquer Hollywood. At that time William Bradley changed his name a little bit.

When the inexperienced Brad Pitt came to Hollywood, he started working as a driver. After that, he was offered to become a carrier of furniture. But this work did not satisfy the guy. Therefore, after few months, he becomes an employee in a network of popular restaurants called "El Pollo Loco". Pitt did not receive a beautiful uniform, but the chicken suit, in which he invited passers-by to the restaurant, became his everyday clothes.

Pitt did not give up for a minute and stubbornly took acting courses. The beginning of his professional career was the role in the series "Dallas". Soon after "Dallas", Brad appeared in episodes of several series: "Tales from the Crypt," "Another World," "Head of the class," and "21 Jump Street", in which Johnny Depp starred at the beginning of his acting career.

In 1988 Brad Pitt finally got one of the main roles in the film "The Dark Side of the Sun". While this film was voiced and edited, in Yugoslavia, where the film was shot, the civil war began. Therefore, the film was released only 10 years later.

Brad Pitt received his first large fee of $ 12,000 for the role of Dwight Ingalls in the comic school horror "Cutting Class". The star of the school, the basketball player looked very realistic in the film, according to the audience.

The next few years the creative biography of Brad Pitt was added by such roles as the drug addict and procurer Billy in the drama "Too Young to die", the thief Jay Di in "Thelma and Louise”, where he starred in a bed scene without doubles with Gina Davis, and a carefree musician in the biopic "Johnny suede ". Pitt starred in the role of a detective Frank Harris along with Kim Basinger in the semi-animated experimental film “Cool World” (1992).

For the next role in the drama "A River flows through it" the actor had to learn how to fish.

In the screen version of the novel by Anne Rice "Interview with the Vampire" (1995) Brad Pitt appeared in the role of a young aristocrat turned into a vampire. He starred along with already very popular favorites of the audience Antonio Banderas and Tom Cruise. But it did not stop Brad from winning women’s hearts.

A stunning duo of Brad Pitt and Morgan Freeman came out in the thriller "Seven." Actor had to say the word "fuck" 74 times in this film.

In 1995, for the role in the film "12 Monkeys" Brad Pitt was nominated for Oscar. The actor had to stop smoking to match the role - his speech in the film had to be very quick and slurred. The same year he was officially included in the list of "25 sexiest actors" in the history of cinema. Since that moment, the American actor has become the idol of millions of women from all over the world.

Brad Pitt reached an amazing growth in his acting career in 1996. Firstly, he starred in the movie "Sleepers". The picture is based on real events and brought the actor huge fame.

In the mystical drama "Meet Joe Black" he portrayed a personification of death inhabiting the body of a young man.

After a short break in 1999, Pitt returns to the movie and plays one of the main roles in the film "Fight Club". This picture made Brad popular not only in the US, but throughout the world.

One of the highest grossing movies of 2000 was "Snatch" by Guy Ritchie, in which Pitt appeared in the title role thin and in tattoos, but had superhuman strength.

The actor got many successful star tandems: Brad starred with Julia Roberts in the melodrama "he Mexican", with Robert Redford in "Spy Game", with George Clooney and Matt Damon in "Ocean's Eleven". In 2000, Pitt starred in one of the episodes of the series "Friends" (9 episode 8 season).

The movie "Troy" collected at the box office half a billion dollars. For the role of the Greek hero Achilles Brad spent six months training on his muscles and learned the art of swordplay. The film raised Brad Pitt's career to a new level.

Brad Pitt's fees for title roles are growing every year. The main character of the film "The Curious Case of Benjamin Button" brought the actor the biggest cash prize.

In the comedy "Burn After Reading" the actor plays the role of a fool Chad Feldheimer. In "Inglourious Basterds" by Quentin Tarantino the star plays Aldo Apache, a brutal hunter of the Nazis.

Brad Pitt has been nominated many times for the famous Golden Globe Award for the best male role in both the first and second plan. Also in 2012 he was nominated for Oscar. Throughout his acting career, Pitt has been repeatedly awarded the title of world sex symbol, and has won the hearts of many women from all over the world.

The actor stars in the film "Allied". Here Brad Pitt plays along with Marion Cotillard in the title role. The film is about the post-war 1940s, in which Pitt plays the American counterintelligence agent, and Cotillard is a Frenchwoman who is a Nazi spy. At the end of 2016, the film should come out on the screens.

Since 2002 Brad Pitt is the owner of his own production company “Plan B” Entertainment. It is a joint company with Jennifer Aniston and Brad Gray. The company produced the film "Charlie and the Chocolate Factory" and many other films.

But his first "Oscar" Brad Pitt received only in 2014. The US film academy called the historical drama "12 years of slavery" the best film of the year. Pitt is one of the film's producers and plays a supporting role in it.

Brad's first love was his classmate at school. Trying to win the heart of the girl, the guy painted the girl's name with yellow paint on the snow under her windows. She took such a gesture with a cold heart and called him boring and stupid.

The personal life of Brad Pitt has always been under the sights of paparazzi. Brad Pitt fell in love with his partner in the film "Too Young to die" Juliet Lewis. Their romance lasted 3 years. Brad could not stand the jealousy of the girl, and after their breakup Juliet tried to commit a suicide, but she did not succeed.

During shooting the famous thriller "Seven" in 1995, Pitt began dating with his partner in the Gwyneth Paltrow. In 1996 they had an engagement, after which young people began to think about the wedding. But in June 1997 the couple announced their breakup, because of Gwyneth's mother. She didn’t like Brad because of his manners, speech, clothes. Gwyneth tried to change him. Brad realized that they were too different and it maked no sense to change himself.

Brad Pitt and Jennifer Aniston met during shooting in the series "Friends." Jennifer won the heart of the actor with her cheerful behavior. In summer, 2000 they were officially married. Bred Pitt shared in many interviews that Jen is the woman of his dreams. She accepted him as he is, without trying to remake, unlike Gwyneth.

In this relationship Brad became stylish and his best and most expensive roles. In their luxurious house in Beverly Hills the couple wanted to have a baby, but in 2005 the couple broke up.

Before the divorce the actor began relationship with the most beautiful actress in Hollywood Angelina Jolie, who was his partner in the famous film "Mr. and Mrs. Smith." Jennifer felt that the family was falling apart, but Brad denied that he had relationship with Jolie.

Therefore, a photo from Africa shocked her. In the picture, Angelina and Brad relaxed on the beach, playing with Maddox Jolie 's adopted son. After that Brad and Angelina told about their relationship.

In 2006 Angelina gave birth to their daughter Shiloh Nouvel was born, and in July 2008 twins, the girl Vivien Marchlin and the boy Knox Leon were born.

According to the information that appeared in the media in 2016, the couple adopted the seventh child. Angelina Jolie visited the refugee camp in Syria, where she met a two-year-old boy Mussa. She decided to adopt the boy.

On August 23, 2014 Angelina Jolie and Brad Pitt officially registered their marriage. There were only 22 people at the wedding. All the funds raised for the sale of photos from the celebration were spent on charity.

The Divorce with Jolie

In the mid-September, 2016 the whole world was shocked with the news about the divorce of Brad Pitt and Angelina Jolie. The exact cause of the divorce is not known, now the couple is actively engaged in the division of property.

Angelina asks the court for custody of all children without the obligation of the former spouse to pay child support. The actress doesn’t plan to forbid Brad to see the children. According to some sources Maddox and Shylo Jolie-Pitt expressed a desire to live with their father.

The couple called the cause of their divorce "irreconcilable differences." But there are a lot of rumors and versions on this issue: from the upbringing of their children, the character of Jolie to the bad habits of Pitt and his relations with the actress Marion Cotillard.

On the 19th of March the insiders reported that Angelina and Brad had found a compromise and decided to divorce at last. Though, the questions on the custody of children and property division haven't been solved yet, in a short time both of them will change their marital status.

Brad Pitt is a sex symbol of Hollywood and one of the most popular actors. In 2016 he starred in the film "The Allies".

In 2017, two premiere with Brad Pitt are planned - the continuation of the fantastic action movie "World war Z" and the drama "War Machine”. 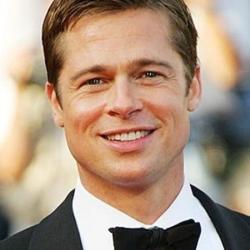