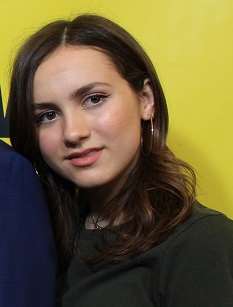 Maude Apatow is an American actress and writer. Maude became known for acting in the following movies: Knocked Up, Funny People, This Is 40, and in HBO's series Euphoria that came out in 2019. The actress rose to fame, not due to her famous parents, who are also actors, but thanks to her extraordinary talent, beauty and acting abilities.

Maude Apatow was born on December 15, 1997, in Los Banos, California, the U.S. She is the oldest daughter of director Judd Apatow and actress Leslie Mann. She has a younger sister, Iris Apatow, who is also an actress. Her paternal grandparents are Tamara Apatow (grandmother), and Maury Apatow (grandfather), a real estate developer.

On the Internet, there are many baby photos of the actress. From childhood she was engaged in filming, taking a good example from her gifted parents. As celebrity kids, Maude and her sister grew up to be completely stunning. No doubts, they inherited acting skills of their parents, but they definitely have a knack for acting from birth.

Maude was a college student; then she attended Northwestern University, where she did normal college student things. At a young age, Maude started to post on her social networks and was greatly accepted by the audience.

In 2007, the beautiful girl made her film debut in the romantic comedy film Knocked Up, which was written, produced, and directed by her father. She played a supporting character named Sadie. The film follows the repercussions of a drunken one-night stand between a slacker and a just-promoted media personality that results in an unintended pregnancy. This work was a huge success, and Maude began to become even more recognizable.

She next appeared in the comedy drama film Funny People which was also produced and directed by her father. She played a supporting character named Mable. Though the movie received positive reviews, it was not as successful as the previous work.

In 2012, the actress appeared in the film This is 40, which was a sequel to the 2007 film Knocked Up. The film was also directed, written, and co-produced by her father. She portrayed Sadie, the thirteen-year-old daughter of her mother’s onscreen character. The film follows the lives of middle-aged married couple Pete and Debbie as they each turn 40, with their jobs and daughters adding stress to their relationship. The film was warmly received by the viewers, but the opinions of the audience were divided into good and bad.

In 2015, Maude also played a minor role in the American TV series Girls, that was aired on HBO. It was created by Lena Dunham, and her father Judd Apatow was the executive producer. It focused on the problematic lives of four characters who were living in New York City. The series won several awards including two Emmys and a Golden Globe.

The actress was latest seen in the American drama film The House of Tomorrow. Directed by Peter Livolsi, the film was based on a novel of the same name, written by Peter Bognanni.

In 2019, she began playing one of the main roles as Lexi Howard in the teen drama television series called Euphoria. It is based on the Israeli miniseries of the same name. The series with adult content found good response from the audience.

The actress often appears on TV. There was a funny moment she shared on the TV show Late Night Show. Maude told a story when she met Drake while she was wearing a huge afro and beard while dressed as late PBS painter Bob Ross. She recalls this moment with a smile.

Maude is known to be in a long-distance relationship with boyfriend Charlie Christie. He lived in London while Maude had studies at a college in Chicago, USA. The couple started their romance since April of 2018. Despite the fact that her boyfriend was at a long distance from her, she often visited him to spend time together.

The duo celebrated their first anniversary in 8th of April 2019. maude and Charlie seem to be very happy in their relationships. Maude prefers to stay away from the media spotlight when it comes to her private life. She prefers not to discuss her love life or relationship status with her followers on social media. She believes that there personal things have to be kept a secret.

The actress is also can be named a blogger. On her Instagram account, she has over 400,000 of followers. She posts different photos, including funny moments from her everyday life, endorsement photo-sessions, bikini images at the beach and photos from film shootings.

On Twitter the celebrity has almost 200,000 followers. In 2013, Time magazine voted her as having one of the best Twitter feeds. People called her posts funny, sincere and very truthful.

Maude also works as a writer to a website founded by famous actress Zooey Deschanel. Her contribution on the site as well as her acting roles earned her a spot on the Forbes 30 Under 30 list in 2012.

The net worth of the actress is estimated at around $500,000. She succeeds to earn money mainly from her acting roles and endorsements. As of today, Maude can be considered one of the most gifted and popular upcoming actresses in Hollywood.