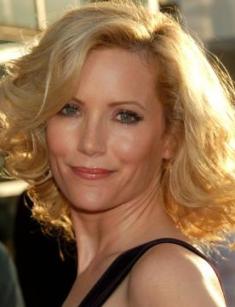 In 2012, Elle called the actress Leslie Mann the queen of comedies; millions of viewers agreed with that. Leslie’s popularity came with Ben Stiller’s iconic comedy The Cable Guy starring Jim Carrey. Further on, the artist appeared in other popular comedies: Knocked Up, Funny People, The Change-Up, This Is 40.

Leslie Mann was born in March 1972 in San Francisco. She spent her childhood and youth among five step-brothers. The family lived in Newport Beach. The mother worked as a real estate agent and married three times.

Leslie’s childhood impressions were ambiguous. The girl did not feel much comfortable in such a large family: the shy and silent child often heard the recommendations to keep quiet and reserved. In one of her interviews, the woman confessed she did not have the freedom to express her emotions and thus chose acting as her career: nobody would ask her to remain silent, and she would cry out loud and laugh.

After graduation, Mann enrolled at the Joanne Baron / D.W. Brown Acting Studio; the young woman devoured the knowledge. Soon, she began to play on the stage and received small and large parts in the performances of the theater troupe The Groundlings.

Leslie’s movie career was not rapid. The 18-year-old artist appeared in a commercial of the Polish brand Nouvage. In 1991, she participated in an episode of the series Virgin High. The next screen appearance took place in 1994 and did not bring any success.

The actress accepted any offers and waited for the glory hour. In 1996, she worked on the romantic comedy Cosas que Тunca te Dije, but the audience did not like it much. However, another 1996 movie, the black comedy The Cable Guy, brought the breakthrough.

It was challenging for Leslie to gain this role: she surpassed 500 rivals. It was well worth it. Jim Carrey, Matthew Broderick, and Jack Black played the main characters. The audience’s reception was warm.

From that moment, the artist’s popularity was increasing. The next year was marked with the first lead part in the comedy George of the Jungle where she personified a wealthy heiress Ursula. The two-year break followed: Leslie devoted them to her family to come back in the 1999 comedy Big Daddy. Adam Sandler played the main character and worked as a co-producer. The project grossed $163 million.

The tragicomedy Perfume and the crime comedy Stealing Harvard made Mann the Hollywood star. After Judd Apatow’s debuting movie The 40-Year-Old Virgin, the woman was nicknamed the queen of comedies.

Apatow’s second project, Knocked Up, was even more popular. Leslie played Debbie, the main character’s (Katherine Heigl) sister. It is the story about a woman determined to build a career. She meets someone in a bar and spends a night with him; soon, Alison realizes she is pregnant from an idle marihuana smoker. Thus, two different people’s lives are connected.

The chain of splendid comedies made the actress one of the brightest Hollywood stars. The audience loved Drillbit Taylor, Funny People, The Change-Up.

Soon, Mann came back to the role of Debbie in Apatow’s new comedy This Is 40 where this character became the center of attention. The project became the spin-off of the popular comedy Knocked Up and showed the secondary figures: the family life of Debbie and Pete (Paul Rudd).

2014 was marked with another famous comedy, The Other Woman. Leslie’s character, Kate King, is a nice provincial woman who believes her husband in everything; the man frequently goes on business trips. One day, Kate learns that he had been cheating on her. She meets her marriage wrecker (Cameron Diaz) and makes friends with her: as it turns out, the cheating husband told her he was single. Soon, the deceived women meet the third one (Kate Upton): the womanizer was made a fool of her, too. Eventually, the furious companions in misfortune unite their effort and begin their revenge.

Leslie Mann is also a voice actress: the characters from the animated movie Rio and the Academy-Award winner ParaNorman have her voice.

The woman met her future husband, the then screenwriter Judd Apatow, at the movie set of The Cable Guy. As soon as Judd saw the actress, he decided he would marry her. Several weeks later, Mann had the same feelings, even though she had fallen in love with Ben Stiller at first.

The marriage was happy and brought many successful collaboration projects. Two daughters were born in this union: Maude (1998) and Iris (2002); the girls have taken their first steps in cinematography.

Today, Leslie Mann enjoys her family harmony. According to the artist, she is emotional, and her husband is the embodiment of reason. Nevertheless, the couple is happy. The actress does not keep her personal life secret and shares pictures on her verified Instagram page.

In 2016, Leslie played a secondary character, Meg, in the comedy melodrama How to Be Single. Meg is the elder sister of the main character, Alice (Dakota Johnson). She splits up with her boyfriend and moves to Meg; at the same time, the youngest sister is looking for a new partner. The movie shows two different approaches: long-term relationships and one-night stands with a lot of parties.

At the end of 2016, Mann appeared in The Comedian; she got the lead part after several candidates refused to participate. Robert De Niro played the main character. It is the story about an old stand-up comedian known for his humiliating humor, scathing expressions, and sharp temper. However, times change, and so does the comedian.

In 2018, the actress played the main character in the youth comedy Blockers. The theme is popular and somehow worn-out: a prom and the chaos related to it, such as alcohol, experiments in sex, and good-bye adventures of yesterday’s school students. As the story runs, three girls make an agreement they will lose virginity at the prom. Their parents learn about it and organize a secret operation, like spies, to destroy these plans at any cost.