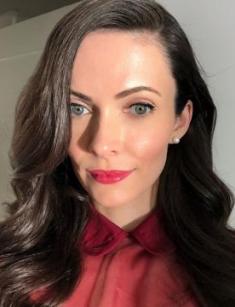 The American actress Bitsie Tulloch has participated in dozens of projects, but the audience knows her for the fantasy series Grimm mostly. The artist appears in full-length movies and series and delights her fans almost every year.

Elizabeth Andrea Tulloch was born in San Diego, California, in 1981. The girl was called Bitsie since early childhood; it was the reference to the nickname of the grandfather, who served in the air forces during the Second World War. The actress has Scottish roots from her father; the mother’s origin was Spanish.

Bitsie debuted on the screen in 2001 when she appeared in the short movie R2-D2: Beneath the Dome pertaining to the Star Wars franchise. Besides, she tried herself on the theater stage and received many positive reviews for the role of Sally in Sam Forman’s Quarterlife. Further on, Tullock took part in episodes of The West Wing, House, Cold Case, and Moonlight.

Soon, the young actress began to receive invitations to full-length projects. In 2008, she joined the cast of Lakeview Terrace and had an opportunity to collaborate with Samuel L. Jackson. In 2011, the woman gained a part in the retro movie The Artist that could boast the Academy Awards. By that moment, she had already started working on the series Grimm that brought her international recognition.

The detective fairy tale brought the role of Juliette Silverton, a veterinary and witch, who became the main character’s lover. Bitsie’s character had many transformations within six seasons; she had to fight against the evil forces and discover them in herself. The project starred David Giuntoli, Claire Coffee, and Sasha Roiz.

The role of Juliette remains the most notable work of Bitsie. She also participated in the series Portlandia, Supergirl and the movies Parkland, Concussion, and Caroline and Jackie. One can hear Tulloch’s voice in the animated movie Alpha and Omega.

The artist’s personal life has been happy. She began to date her colleague, David Giuntoli, when they were working on the series Grimm. The news about their romance came in 2014; the couple announced their engagement two years later. The wedding ceremony was held in Montana in June 2017; the newlyweds shared photos from the event on Instagram.

Tulloch also told her fans about her pregnancy on her Instagram page, too. On Valentine’s Day 2019, Giuntoli received the most precious present, the daughter Vivian.

Although motherhood is the priority for Bitsie now, she finds some time for new projects.

In July 2019, the actress announced she was ready to return to Lois Lane; her character was going to appear in the crossover Crisis on Infinite Earths based on the popular comics.