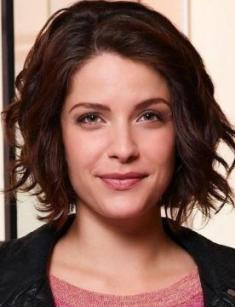 The American actress Paige Spara earned her fame in 2015, when the movie Audition was released. Besides, the audience knows her for the series The Good Doctor premiered in 2017.

The would-be star was born on August 8, 1989, in Washington, Pennsylvania. The girl’s mother owned a hairdressing salon, and the father worked as a dentist. Little Paige had an elder sister, Taylor, and a younger brother, Jesse.

The child realized she wanted to devote her life to cinematography early and began to study acting at 12. Spara joined a local theater studio for kids and also performed at her school stage.

In 2008, Paige graduated from school and entered Pittsburgh Community Theater to polish her skills. Further on, she enrolled at Point Park University in Pittsburgh but spent there only two years and transferred to Marymount Manhattan College. In 2012, Spara received a Bachelor’s degree in drama.

Before the young woman appeared on the TV screen, she worked as a tour guide on a bus; her first parts were in commercials for Forevermark Jewelry, Sally Hansen Nails cosmetics, and Volkswagen Golf. Besides, Paige’s picture was projected as a hologram and exhibited at Dulles International Airport to greet travelers.

When Spara finished her college studies, she moved to Los Angeles and spent two years auditioning before she got a part in the short movie What Showers Bring. Right after that, Paige appeared in Warren Elgort’s 15-minute video After the Hurricane and collaborated with Anthony Marks, Will Cart, Lee Moore, and Amanda LaPergola.

The first lead role came in 2015; it was the mini-series Kevin from Work that lasted for one season. The main character, Kevin, works in an office and has a monster boss. Besides, the love of Kevin’s life works in the same place, but the young man is too shy to reveal his romantic feelings.

He decides to move to Europe – out of sight, out of mind; however, his plans never come true. Although Spara’s role was significant, it did not bring her much popularity, unlike the next project.

The documentary thriller Auditions was released the same year, in September; Paige personified the main character. Angel Pai, Chelsea Frei, and Donovan Christie became her colleagues. Movie makers started talking about the actress, and the audience appreciated her talent. Although the documentary was never spread outside the United States, the Americans liked it and gave many positive reviews.

The next appearance happened in 2017. The rom-com Home Again was filmed in 2016; it took a month to have all the shooting done. Although the work was done quickly, the director and screenwriter Hallie Meyers-Shyer created an excellent comedy starring Reese Witherspoon, Michael Sheen, and Candice Bergen. Paige personified a bartender in several episodes. It is the story about a single mother, Alice, living in Los Angeles. All her days are the same until she allows three young men to stay at her place for a while.

In 2017, Spara was invited to the series The Good Doctor with Freddie Highmore, Nicholas Gonzalez, and Antonia Thomas. One can see a talented autist doctor who has an unusual diagnosis: the savant syndrome that gives him an incredible memory and extreme sensitivity to people’s problems. Thus, Dr. Murphy makes an excellent surgeon, but his personal development remains like that of a child.

There has been no information about the woman’s personal life; she is either single or reluctant to show her relationship.

Although Spara often works hard, she tries to find some time for her fans and regularly posts short videos and new photos with colleagues, friends, and family. There are pictures in a swimsuit and tight dresses; Paige is slim and attractive. Her height is 5.15 feet (157 cm.), and her weight is 108 lbs. (49 kg.).

Today, the artist continues to work on The Good Doctor; the third season has been announced.

In, 2019, a new movie with Paige Spara, She’s in Portland, will be released. Tommy Dewey, François Arnaud, Minka Kelly, and Joelle Carter contributed to the project. The actress gained the role of Mallory.