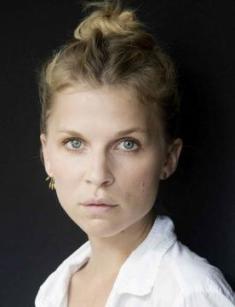 Clémence Poésy is a French actress, model, designer, and painter; she has been a spokesperson for many cosmetic and perfume brands in Europe. The audience knows her as Fleur Delacour in the Harry Potter movie saga.

Clémence Guichard was born on October 30, 1982, in L’Haÿ-les-Roses. The girl’s father was an artistic man and worked as a director; he also performed on the stage sometimes. The mother was a teacher of French; later, the actress took her maiden name as a part of her pseudonym.

The future artist went to school in Meudon. She was not a people person, and peers thought she was weird. However, the temporary loneliness was the best option for the child at that time; Clémence was deeply involved in art.

At the age of 13, the teenager went to Canada as an exchange student and quickly made friends in the new place; it was a great pleasure to live in a different environment. When Poésy returned home, she decided to reset her approach to everything around her and transferred to a new school, bilingual La Source.

The would-be actress showed much interest in fashion and cinematography when she was a kid. At 14, Clémence debuted on the stage with her father’s assistance and performed several times; she realized what her destiny was soon. This is when the young woman took the new second name and started studying acting.

Poésy graduated from Atelier International de Blanche Salant et Paul Weaver, the French National Academy of Dramatic Arts, and the University of Nanterre. The beauty did not have to wait long for her first photo shoots and collaboration with modeling agencies. Although Clémence accepted such offers, she did not forget about the primary goal: to become a full-fledged actress.

2002 was marked with the debuting part in the German movie Olgas Sommer; the French comedy Welcome to the Roses followed the next year. The Scottish Queen Mary in the BBC series Gunpowder, Treason & Plot became the first role English and brought Poésy the Golden FIPA Award for actress in a TV Series and Serial.

The success came with the 2005 movie hit Harry Potter and the Goblet of Fire; the actress personified the witch Fleur Delacour. Since that time, Clémence’s career has been developing rapidly; both critics and ordinary viewers praised her work. The woman appeared in TV projects as well. In 2006-2007, one could see her Natasha Rostova in the mini-series War and Peace.

Both American and European movie makers were eager to work with the actress; she combined series and theater performances. In 2008, Clémence participated in In Bruges and received a nomination for the Academy Awards; two Harry Potter colleagues, Ralph Fiennes and Brendan Gleeson, became her stage partners again.

In the next few years, Poésy joined the cast of the horror Heartless and the drama Lullaby for Pi. She was also invited to the last parts of the story about a magician boy, Harry Potter and the Deathly Hallows.

2010 expanded Poésy’s filmography with the youth series Gossip Girl. The success on television contributed to new favorable roles in movies; the role of Rana in Danny Boyle’s 127 Hours gave her another nomination for Oscar. In 2012, the actress participated in the TV series Birdsong.

Clémence’s modeling career has been remarkable as well: she collaborated with ID, Jalouse, Nylon, and Yen magazines, and the perfume brand Chloe made her its spokesperson in 2007. The next year, Poésy was a model for Gap. In 2011, she had a new exciting contract with G-Star Raw.

As the artist told journalists, she would like to expand her professional horizons and remain popular without producers’ whims, choosing roles independently. Clémence added she loved acting but wanted to try something else: thus, the woman took some steps in music, design, and photography. In 2011, Clémence and Miles Kane recorded a song for the musician’s first album Color of the Trap.

Clémence Poésy is one of those celebrities who keep their personal lives secret; however, the media managed to reveal some facts. The actress used to date her colleague Max Irons and then was reportedly engaged to Emeric Glayse; the couple broke up for an unknown reason.

Whether the actress is married now is unclear. However, she has a son: the boy Liam was born in 2016. The father’s name is unknown.

Clémence is always looking for new hobbies; reading books and listening to music inspire the woman most. She speaks several languages: French, English, Spanish, and Italian and lives in two places, Paris and London.

The actress has an Instagram account and regularly shares new photos and videos. There are no pictures in a swimsuit: Clémence prefers to use the account to express her thoughts and attitude toward various events in the world.

Clémence has a younger sister, Maëlle Poésy-Guichard, who is also an actress.

In 2018, Clémence appeared in the series Genius: Picasso about the famous Spanish painter.

The same year, she finished working on another project, the series The Tunnel. Fans will have the opportunity to see their favorite in the biopic Resistance about Marcel Marceau soon: the drama is on the post-production stage now.