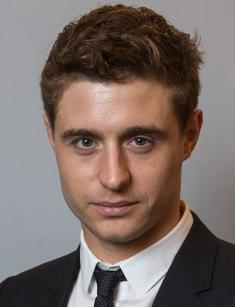 Adorable Max Irons had a long way before to show the nature of the actor's talents. The son of the star family could not get rid of the shadow of his parents for a long time. The young man managed to take a deserved place in the film industry; the man has only the main roles in recent years.

Max was born in London in the actor's family. The mother Sinéad Cusack gained fame as the talented Irish actress and his father Jeremy Irons, Oscar-winner, an Englishman. Max attended the Dragon School in Oxford. From early childhood, he grew up a man, who was fond of, in the circle of interests a strong place was occupied by sports-swimming, rowing, rugby. The teachers, seeing the ability of Irons, advised not to neglect the career of a professional athlete.

However, Irons, who grew up in an acting environment, dreamed of the spotlight and glory too. He joined the students of the Guildhall School of Music and Drama after school. The bright acting talent manifested itself from the first months of training but interfered with one point: Max had dyslexia, people with this congenital disease hardly perceive the written text.

By the way, the father was against the chosen field: Jeremy Irons did not wish his son a heavy share of the actor, so he tried to prevent the heir on the way to the dream. Max showed courage, the parent had to accept the choice of his son at last. In the future, the famous actor even helped to master the craft.

Before he was on the big movie, a student of the theater school advertised well-known brands, participating in promotions and PR campaigns. For example, Irons shone in the advertising "Burberry" and "Mango." The young man did not give up a model business after graduation. The young man with a colorful appearance was popular with famous photographers, Mario Testino, the English master of the lens, liked to work with him.

Acting lit up the biography of Max quite late, the young man first appeared on the screens only in 2004 and then in an episodic role in the film Being Julia. Irons played the boy at the curtain here. The actor began to receive serious offers only five years later. In 2009, he was invited to an episode of the series Fugitive, shown on British television. And then he got the main role in the short film Unrequited Love.

Irons joined the cast of Oliver Parker's movie Dorian Gray at the same time, which involved Ben Barnes, Rebecca Hall, Fiona Shaw. Max turned into Lucius in the film, based on the novel of Oscar Wilde The Picture of Dorian Gray. The Hollywood film brought the first popularity to the aspiring actor; he finally managed to appear from the shadow of his star parents.

The blockbuster Red Riding Hood (2011) directed by Catherine Hardwicke helped to declare loudly about himself as an independent, talented actor. The woman invited Max to the role of one of the main characters, who looked great in tandem with the characters of the actors Amanda Seyfried, Shiloh Fernandez and Alexandria Maillot.

Thriller replaced the fantastic tape The Host, in which Irons also got the main role. The young man tries to save the Earth from alien occupation together with other heroes. After this work, Max had fans of Hollywood cinema, firmly established in the cinema and proved that he could cope with any genre.

In 2013, Max Irons tore between two projects, including Antonio Vivaldi, where he tried the role of a brilliant musician. Also, the 10-episode film The White Queen was released, in which a man turned into King Edward IV.

The historical film tells the story of the War of the White and the Red Roses, a film adaptation of the three-volume of the British writer Philippa Gregory. The shooting gave Max the opportunity to work with Rebecca Ferguson, Juliet Aubrey, Veerle Baetens and other famous persons.

The audience warmly accepted the movie The Riot Club next year and after another 12 months Bitter Harvest, where Irons again shone in all his glory. The romantic-drama is about the events of the so-called Ukrainian Holodomor; the man got the role of Yuri, a talented artist is from a peasant family. The Ukrainian actors Ostap Stupka and Alexander Pecheritsa starred in the film too.

There was the director's work of Simon Curtis on the theme of world war II – Woman in Gold (2015) in the actor's filmography. Irons starred together with Katie Holmes, Helen Mirren, Daniel Brühl. The authors of the project told about the Jewish family repressed and robbed by the Germans, whose descendants try to return the stolen relics.

In 2016, Max appeared before the audience in the image of the archaeologist Howard Carter, who found the tomb of the Pharaoh of Ancient Egypt. The director Peter Webber directed the mini-series, Tutankhamun.

Fans started talking about the affair between Max Irons and the colleague on the set Amanda Seyfried after the premiere of the film Red Riding Hood. Journalists were interested in a relationship at each press conference. Unfortunately, the information turned out to be false; it was created by the paparazzi.

In 2011, "the British Prince", as the fans call the educated and also the famous, handsome Max, he said about the tender feelings to the Australian actress Emily Browning. Feelings broke out Between the young people; it lasted a year.

In mid-2012, the pair announced the breakup; the reason was a tight work schedule that interferes with the meetings. Since 2013 and still, people see Irons in a relationship with Sophie Pera, the stylist and editor of the fashion magazine "Town and Country",

The young man likes to read fiction in his free time, has a passion for travel, especially likes Greece. He admits in an interview that he keeps his figure when he swims. Max hates this activity and he does not mind diving on vacation.

At the end of 2017, Max pleased the audience once again with the acting game, starring in the dramatic detective Crooked House. The creators of the movie took as a basis for the novel of Agatha Christie. Irons turned into a private detective who investigates the death of a relative of his girlfriend.

The artist joined the ranks of the film crew of the political thriller Condor, was released in 2018 immediately after this work. The film is based on the spy thriller Three Days of the Condor (1975), the director Sidney Pollack and tells the story of a secret CIA researcher, who proved that the true nature of a man is manifested only in extreme situations.

Videos from the filming of the series appeared on the Internet periodically, consisting of 10 episodes. Fans note on the fan pages on Instagram that Max, is matured and is only getting better over the years playing the main roles.