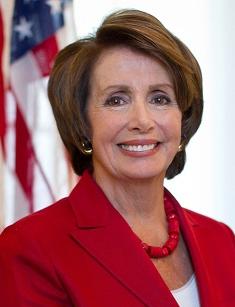 For her long-lasted career, the politician has managed to broke new ground for women in politics several times. She proved to be a vivid supporter of human rights and frequently was in the center of controversies, thanks to that, Nancy gained the reputation of highly effected fund-raiser and shrewd politician. Her productive work made her the rankest female politicians.

She was born in the big family in 1940, the youngest of the seven children and the only girl, Nancy was raised in the democratic values. Her mother and father were both politicians. Thanks to that, she had an excellent example of successful politic activists since her childhood. From an early age, she helped her father and presented it at the campaign events. The most significant among them was the inaugural address of John Kennedy.

As to education, the girl attended an all-girls Catholic school in Baltimore. Then she continued to study at Washington, gaining a bachelor's degree in political science.

As a matter of fact, at the beginning of the 60s, Nancy focused on growing up her children, she was a housewife who started her Democratic party club at home.

In the 1960s, the young politician started her career from an internship. Then she moved to San Francisco, where she began methodically work her way through. In 1977 Nancy gained significant prominence when she became the head of the Democratic Party of California. In 1976 Nancy became a member of the National Committee after successful elections.

Her long-lasted friendship with the congressman Phillip Burton had led to rather unexpected consequences. He died in 1986, and a year later, his succeeded wife died too. Sala Burton chose Nancy as her successor and supported her. As a result, Nancy began to represent the whole district in 1987. She has continued to hold this position in our days. This is the safest Democratic district where she was reelected sixteen times. The political figure served in this position for twenty years. In 1987 she became a congresswoman at the age of 47. Her youngest child left for college that year and Nancy raised $1 million and recruited 4,000 volunteers for seven weeks.

During her work in the Permanent Select Committee, she was a vivid supporter of increasing funding for health care, the politician advocated for human rights and the environment. In 2002 she got another promotion to become the Democratic leader in the House of representatives. She became the first woman in the history who took this position.

In 2002 she took her new position in the House of Representatives, four years later she had broken new ground again when the politician became the first female speaker of the House. In her first 100 hours of work, Nancy raised the minimum wage and ended many tax subsidies to oil companies.

She worked on this position till 2010 when she met criticism for her losses and significant challenges. In 2016 the Ohio Congressman tried to replace her, but he lost. The politician became the chief critic of Donald Trump.

In 2018 she took the position of the house speaker again when Democrats took the House under control back. At the beginning of 2019, she was placed on the front line in the battle with Trump in the question of the border in the south region.

The politician has a shared vision on the acute question, which she continually defends. Nancy opposes the legislative separation of families at southern borders. The politician called the compromise bill with the Republicans the deal with the devil.

The Democrat is a vivid supporter of same-sex marriages. She began supported minorities in the times when it was an unpopular topic in the country. When same-sex marriages were permitted in California, the Politian stated that news as a historic decision. Nancy indicated that her views coincide with her Catholic religion.

"My religion compels me—and I love it for it—to be against discrimination of any kind in our country, and I consider [the ban on gay marriage] a form of discrimination. I think it's unconstitutional on top of that".

She is one of the architects behind the 1994 assault-weapons ban along Chuck Summer.

She voted for legislation of marijuana in medical, industrial, and recreational aims. As to climate change, the politician is one of those who see in it the existential threat for people. In 2018 she stated that gun control would be the priority of the Democrats.

She opposed the technique of waterboarding in 2009. She criticized the work of George Bush, named him an incompetent leader. In the summer of 2019, Nancy said that she wouldn't like to see the present president impeached. She preferred to see Trump's loss to the Democratic party in the next elections. But later, she stated that the democrats would launch a formal impeachment inquiry.

As a leader of Democrats, Nancy sometimes appeared in the center of controversy. Thus she demanded the withdrawal of troops from the Iraq region. The politician traveled to South Korea and repeatedly expressed concern about nuclear proliferation from North Korea. She was one of the politicians who demanded transparent investigation of Russians' interference in the 2016th elections.

She accused Trump of siding the president Putin. She stated that the Russian president deserves the fierce unanimous condemnation of the international community for his illegal actions in Crimea and ongoing attacks on the elections in the USA. She criticized Trump for the withdrawal of American troops from Syria and Afghanistan.

She met her first and the only husband as a student. In 1963 the couple married. Her brother is also a politician who serves for the Democratic party too. The politician has got five children and nine grandchildren. Her family resides in San Francisco. Her net worth is estimated at more than $26 million. Nancy’s earliest financial backers are two vineyards in California.

She is active on social networks, where represents herself as a supporter of the middle class. The politician often shares her political views and gives commentaries on the latest events, thanks to tweets. Her dad was a congressman too. Her daughter is a journalist, writer and filmmaker.

She became a legend, also thanks to her work ethic. Thus, it is known that she barely sleeps and doesn’t drink coffee. Instead of coffee, she prefers hot water with lemon. Besides, her daily routine includes doing The New York Times crossword and eating New York Super Fudge Chunk ice cream at breakfast.