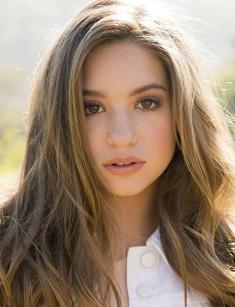 Madison Nicole Ziegler is a young American dancer, model, author and also an actress. Ziegler appeared three times on the list “30 most influential teens” of the Time magazine in 2015–2017. She first gained her fame after appearing in the reality show Dance Moms (2011–2016) and also after starring in the music videos by the singer Sia.

Madison Ziegler was born in 2002 in Pennsylvania. Her parents, Melissa Ziegler-Gisoni and Kurt Ziegler, were the owners of a mortgage business. Ziegler’s family has Polish, German, and Italian descent. When Madison was nine, her parents divorced, and in 2013, Melissa married another man, Greg Gisoni, who runs the Westinghouse Electric Company. Speaking about siblings, Maddie has a lot of them: two older half-brothers from her own father's previous marriage, two older step-siblings from the prior marriage of her step-father, Greg, and a younger sister, Mackenzie Frances.

By the way, Mackenzie is also a dancer, and she appeared on Dance Moms (2011–2016) with her sister. Ziegler and her family have lived mostly in Murrysville, Pennsylvania, and also a little in Los Angeles. Actually, Maddie has always been close to her relatives. For instance, in one of her interviews, she breaks down when the topic of the conversation goes to her grandma. In 2018 Ziegler appeared in one of the episodes of the Hollywood Medium with Tyler when he claimed that Maddison’s grandmother was her guardian angel.

As a kid, Madison started attending dance classes and then became a part of the Abby Lee Dance Company, where she has discovered a lot of courses such as jazz, ballet, contemporary and so on. Generally, Ziegler has started her activities since two years old. Until 2013, Maddie studied at the Sloan Elementary School, and now she is getting her education at home.

The main Maddison’s occupations are acting, dancing and modeling, about which we will tell you in the sections below. Besides that, Ziegler is a writer. In 2017, she released her memoir named The Maddie Diaries, which became a New York Times Best Seller. Maddie is also writing a trilogy of novels, which are focused on the young dancer, Harper. The first book, The Audition, was published in 2017. The second one is called The Callback, and it was released in 2018. We are waiting for the third novel to be published in 2019!

Madison, at her young age, already has a net worth of $6.7 million, which is fascinating. She gets this money from her various occupations. If we look at Zingler in perspective of before and now, we will see how much success this young girl has gained!

While being a part of the Abby Lee Dance Company, Maddison has won a lot of titles at various dance competitions. Then, Ziegler gained full notice by starring in the 2014 video for the song “Chandelier” by Sia, the singer, who found Maddison on Dance Moms. This video has won the ARIA Music Award for the Best Video and MTV Video Music Awards for the Best Choreography, and it has also been nominated at the Grammy’s. Besides, it gained more than 2 billion views on YouTube.

At 13 years old, Maddie became a part of another Sia’s video, “Elastic Heart," together with Shia LaBeouf. Also that year, the young dancer starred in “Big Girls Cry." Ziegler has danced to Sia's songs at the Ellen DeGeneres Show, Dancing with the Stars, Jimmy Kimmel Live! and others. In 2016, Maddison starred in the fourth and fifth Sia’s videos, “Cheap Thrills” and “The Greatest." Ziegler’s performances have been described by Teen Vogue as really powerful, and a ballet choreographer Troy Schumacher noticed that Maddie had created "her own world of dance." At present, Maddison and Sia continue collaborating.

Maddison’s acting career firstly was deeply connected to her dancing skills. In 2010, she appeared on the reality TV program Live to Dance with her performance. Next year, Ziegler began starring in the show Dance Moms that made her a very popular dancer in the whole entertainment world. Her performances where she appeared as Lizzie Borden and “Come to the cabaret” became ones of her most famous works. She has been starring in it with her mother for five years until in 2016 it was not ended.

In 2012, Ziegler got her debut professional role of Young Deb in the series Drop Dead Diva. Then, at age 12, she made a guest appearance in one of the episodes of the HitStreak Summer. In 2015, the young actress appeared in the Disney’s series Austin & Ally and ABC’s Pretty Little Liars. In 2016 and 2017 Maddie starred in some episodes of Nicky, Ricky, Dicky & Dawn.

In 2017, in the U. S. the animated film Leap! was released, and Ziegler appeared in it as Camille. Actually, at this time, the actress was behind the scenes of Leap!, because she voiced her character. Also that year, Maddison played the role of Christina in The Book of Henry. Maddie looks forward to continuing her acting career and develop in this field. As in dancing, she is getting a lot of positive reviews on her acting work. The next project, where we will see Ziegler, is Steven Spielberg's upcoming remake of the West Side Story.

Maddison's occupation is far more than dancing and acting; she is also a model! Ziegler has represented brands Capezio, Ralph Lauren, Target. She has appeared on the covers of magazines such as Harper's Bazaar, Teen Vogue, Vanity Fair (Italia), Cosmopolitan, Billboard, and so on.

In 2014, Maddie and her sister, Mackenzie, released their own limited fashion line, The Maddie & Mackenzie Collection, for the online-shop Mod Angel. In 2015, at the New York Fashion Week, Ziegler was a correspondent for the magazine Elle. In 2017, she appeared as a judge on the Project Runway.

The whole of Ziegler's family does a lot of charity work. In 2012, Maddison, together with her mother and sister, arranged the partnership with the Starlight Children's Foundation to help in raising awareness for youth illness. In 2016, Maddie and Mackenzie were the daces of a public announcement for DoSomething.org's Birthday Mail campaign. A lot of children, who live in homeless shelters, cannot allow themselves to celebrate their birthdays properly because there are no lots of money, so Ziegler sisters activated people all over the country to send some handmade cards to orphanages so kids can feel special on their birthdays. Also that year, Maddison and Mackenzie were included in the list of charitable young celebrities.

In 2016, Ziegler performed together with Travis Wall at the Nigel Lythgoe's Dizzy Feet Foundation gala to help the special programs emerge so that low-income children could attend dance education programs and some talented kids could get scholarships at dance schools. Also since that year, Maddison has partnered with the company Dancers Against Cancer and has appeared in announcements which have the aim to raise awareness and funding for people who have cancer. In 2017, the dancer appeared in the 2017 ASPCA Public service announcement with the Sia’s song named “Puppies Are Forever." Maddie encouraged people to adopt homeless dogs and rescue them. Last year, Ziegler collaborated with Sia and MAC Cosmetics in the lipstick ad, which proceeds went to the AIDS Fund.

Ziegler is an active user of social media networks. She has around 13 million followers on Instagram, 1.3 million on Twitter, 1 million on Facebook, and 3 million on YouTube. If you want to see Maddie’s daily life, we recommend you to go on her Instagram page, where can be found not only her dance videos but also some beautiful photos.

Speaking about Maddison’s love life, it has started at 14 years old, when she has been dating Jack Kelly, a son of the former Major League Baseball infielder Pat Kelly. The pair was together in 2017–2018.

At present, it is unknown whether Ziegler is dating someone or not. There are a lot of rumors about her and her friend, Kailand Morris. They met in 2018 at the production of Dancing with the Stars: Juniors, where Maddie's sister, Mackenzie, competed against Kailand's brother, Mandla. Maddison and Kailand hang out a lot together: they were at Coachella 2019, they had a photo shoot where they almost kissed. However, the guys do not confirm any rumors. In one of her interviews, Maddie said that she and Morris were just very close friends, even more like a family.

Ziegler has been nominated for 14 awards and has won seven of them, including three Teen Choice Awards as a Choice Dancer (2016, 2017, and 2018), a DailyMail.com Seriously Popular Award from the People's Choice Awards (2016) and a Shorty Award for the Brand Identity (2017).