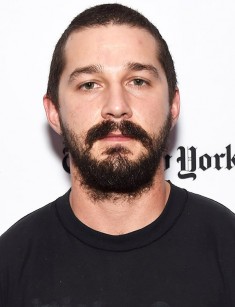 Shia Saide LaBeouf is an American actor who began starring in films as a teenager, but gained worldwide fame later thanks to such films as Transformers, Paranoia, Charlie Countryman. In 2008, he was considered the most promising young actor in the United States, for which he was awarded the "Rising Star" award from the Association of Film Critics. Shia was born in Los Angeles. He describes his family as "strange, but classy." His name was given to the boy thanks to his grandfather-humorist. He decided to call the American grandson in Hebrew. In fact, from the Hebrew language, the actor's name translates as "Thank God for beef."

Shia's father, Jeffrey Craig LaBeouf, was a veteran of the Vietnam War. He changed many professions, and at the time of the birth of his son worked as a clown in a circus. The mother Shayna Saide danced in a club, although she was a designer of jewelry by education. Because of the parents’ job, there was a corresponding atmosphere at their house - weird but interesting.

Unfortunately, LaBeouf Sr. often drank alcohol, which later developed into a real alcoholism. Shia even accompanied his father to meetings of anonymous alcoholics several times. But this did not help the man. Gradually, he also took drugs and once even put a gun to his son's head. As he explained later, it was a reconstruction of memories of his war years.

Nevertheless, the mother of the future actor did not wait for such memories to repeat. She placed her husband to a rehab clinic, took her son and filed for divorce. Shia was about 10 years old. The mother and the uncle were responsible for the boy’s education.

Shia studied at the prestigious secondary school named after Alexander Hamilton. Then, when he started his film career at the age of 12, he studied acting at the School of Performing Arts Magnet in Los Angeles, as well as at the Los Angeles Conservatory in the theater department, However, he did not finish it.

But the young man was talented not only in cinematography. Together with his childhood friend Lorenzo Eduardo (now he also famous actor), he created his own hip-hop brand. In addition, Shia LaBeouf tried himself as an artist. He created quite scandalous pictures in the avant-garde "Actionism".

Shia LaBeouf began his acting career at the age of 12. He starred in such films as "Breakfast with Einstein", "Caroline in the city", "The X-Files", "Touched by an Angel" and many others. He also played Kelly Ernswiler in the tragicomedy "The Battle of Shaker Heights", Max Petroni in the action movie "Charlie's Angels: Full Throttle" and Lewis in the grotesque comedy "Dumb and Dumberer: When Harry Met Lloyd".

The actor attracted more attention from the audience thanks to the adventure film "Holes", the mystical thriller "Constantine" and the fantastic action movie "I, Robot". But the real popularity came to Shia in 2007, when he played the main role in the youth drama thriller "Paranoia".

On the wave of success, the actor was invited to the most promising projects and took part in the sequel "Indiana Jones and the Kingdom of the Crystal Skull", a fantastic action movie "Transformers" and a thriller "Eagle Eye." Shia LaBeouf became one of the most famous actors of Hollywood.

In 2003, Shia LaBeouf had relations with the singer Kiely Williams, the vocalist of the music band "Chita Goals". Then the actor began a long relationship with the model China Brezner. They met on the set of the sports drama "The Greatest Game Ever Played" and were together for three years. They broke up because of the fact that Shia devoted more and more time to work, and not to his girlfriend.

LaBeouf had short relations with the singer Rihanna, the actresses Isabel Lucas and Megan Fox. It is interesting that the last two ladies at the time of the relations with Shia were in the serious relationship with their current partners. Isabel also had relations with the actor and musician Adrian Grenier. And Megan Fox was even married to the star of the series "Beverly Hills, 90210" by Brian Austin Green.

His next lover was Carey Mulligan. Their relations began during the filming of "Wall Street: Money Never Sleeps" but in 2010, the couple broke up. However, Shia still calls Carey one of his closest friends. Another actress with whom LaBeouf had relations was Caroline Pho. They were together until September 2012.

The British actress and model Mia Goth replaced Caroline. They met while working on the film "Nymphomaniac". The young people were dating for three years. However, in 2013, they broke up for several months but then began relations again. Later, the lovers got engaged and began to live together. On October 10, 2016, a colorful wedding ceremony took place in Las Vegas. Now Shia LaBeouf is officially married.

Like many modern people, Shia LaBeouf loves tattoos. On his right wrist, there is the inscription "1986-2004", symbolizing the date of birth and the date of the tattoo. On the left shoulder of the actor, there is a predator's paw. There is also a tattoo with a rather philosophical image of a hand in handcuffs, which writes a letter. And on his hip, there is a portrait of a rapper Tupac Shakur, who was killed in 1996 under mysterious circumstances.

Shia LaBeouf is a sports person: he spends a lot of time cycling and surfing. The actor has a passion for Mexican food and is very fond of coffee.

At the end of 2015, he posted his video "Just Do It", which motivated people to realize their dreams. 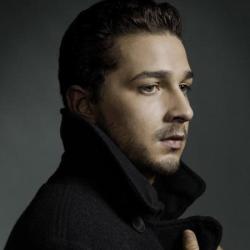