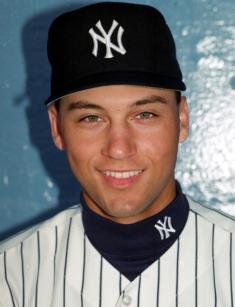 Derek Jeter is one of the most respected baseball players who devoted 20 years of his life to the New York Yankees. He is known for his business and charity activities as well.

The future sportsman was born in summer 1974 in New Jersey. The mother, Dorothy, worked as an accountant, and the father, who used to play baseball as a college student, was a counselor. There were two children in the family: Derek and his sister, Sharlee.

The parents always encouraged their son to fly high and develop his talents. Young Jeter went to Kalamazoo Central High School and did various sports there, from cross country running to basketball. His baseball stats were impressive, and the first awards came even before the young man enrolled at a university.

As soon as Derek entered the University of Michigan, he joined its baseball team and continued to polish his skills. The professional career began in 1992 when the Houston Astros selected the promising player.

Overall, Jeter spent three years in the minor league. The first matches were mediocre; the averages left much to be desired. However, the second year brought improvements: Jeter was allowed to participate in games against strong opponents, including the Columbus Clippers; as a result, the shortstop gained much experience and confidence.

In 1995, Derek joined the New York Yankees, the team he was going to have his best moments with. The next year, the man was given the starting job in some matches and overcame his nervousness; he was one of the Yankees’ great hopes along with Alex Rodriguez and Nomar Garciaparra.

1998 was notable for the first All-Star game. Many glorious episodes followed: the Division Series, World Series, and the position of the team’s captain in 2003. Early in the 2000s, the sportsman switched to free agency.

The athlete’s career high happened in 2004: he earned 44 doubles. His results were good even in unlucky seasons, like becoming the third youngest player to have the 2,500th hit.

2014 was the final season for the baseball legend; The Yankees paid him $12 million for it.

The man’s personal life has always been in the center of journalists’ attention. He conquered many beauties’ hearts: the singer Mariah Carey, the photo model Vida Guerra, Miss Universe Lara Dutta, the TV presenter Vanessa Minnillo, and the actress Jessica Biel.

In 2012, the sportsman began to date the model Hannah Davis; the lovers married in summer 2016. Two kids have been born in this union: the daughters Story Grey and Bella Raine.

One can learn more about Jeter’s life and personal philosophy in books: The Life You Imagine: Life Lessons for Achieving Your Dreams, Strike Zone, Curveball, and others.

Jeter tried himself in business first in 2013, when he could not play because of an injury: he collaborated with Simon & Schuster and created its branch, Jeter Publishing. The next year, the website ThePlayersTribune.com was launched.

2017 brought the purchase of the basketball team Miami Marlins. The baseball player possesses only four percent of the whole company and works as its CEO, too.

Derek regularly appears on commercials; for instance, fans could see him advertising family insurance services in 2019.

Apart from other activities, the entrepreneur is famous for his charity work. In 1996, he founded the Turn 2 Foundation to help children and adolescents dependent on substances; talented students are also supported financially. Besides, Derek contributed to the work of other organizations, such as Stand Up to Cancer and Soles4Souls. Hannah participates in philanthropy as well and shares much information about various events on her Instagram.

2020 began with the fascinating news: Derek Jeter was elected to the National Baseball Hall of Fame. Interestingly, only one out of 397 members of the Baseball Writers Association of America was against the decision; no announcement about their identity has been made.