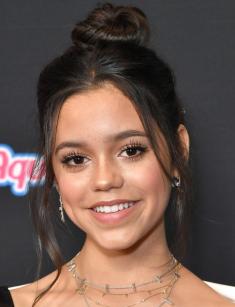 She is an American 17-years-old actress who has got a promising career. By 17, she has already appeared on the number of movies and TV series and won the prestigious award. The actress spent almost half of her life on the set! The rich experience and vivid acting talent guarantees the actress different and complex roles on the horizon.

Besides her spotless reputation of the skilled actress Jenna devotes much time to collaboration with the charitable organizations.

The other part of her life is connected with her presence in social media. Thus she has got more than 3 million followers on Instagram. All that made Jenna a significant media influencer and a real voice of a generation.

She was born into a big family. Jenna is the fourth of six siblings. Her ethnic background is mixed. Her parents are of Mexican and Puerto Rican ancestry.

Jenna opened acting skills at the age of six. Thanks to her mother’s support and the help of agents, she regularly received auditions two years later. To mix education and acting career, Jenna was home-schooled.

Her movie and television career began from episodical roles. In 2012 Jenna appeared on the TV series “Rob” and “CSI: NY.” Next year the actress made her debut on a big screen starring in the world franchise. She played the daughter of vice president in “Iron Man 3”.

From 2014 the young actress began appearing in the recurring roles. She played Zoe Leon in the movie “Rake” and worked on the picture “Jane the Virgin” playing Young Jane. Gina Rodriguez played the older version of Jane in the project.

In 2015 Jenna starred in TV series “Richie Rich,” where the actress portrayed the best friend of the leading character. Her character was a gold digger who spent Richie’s money. The work received mixed reviews; meanwhile, Jenna gained notoriety. However, that experience helped her career.

In 2016-2018 she played the leading character in TV series “Stuck in the Middle.” She played the middle child of seven siblings. Thanks to her perfect work, the actress received several award nominations.

In 2019 Jenna appeared on thriller series. She joined the cast of the upcoming comedy movie “Yes Day” and the horror movie “The Babysitter 2”.

Besides her acting career, Jena displays an interest in directing and dreams of directing movies in the future. In 2018 the actress took part in TV series “On My Block” working alongside Ronni Hawk.

There are a lot of rumors about her personal life. It was reported that she dated with Isaak Presley. The public and journalists repeatedly spotted the actress and her boyfriend. In 2017 she had a relationship with Jacob Sartorius even though this information hasn’t been confirmed.

In 2018 the actress appeared on the public events with Asher Angel, which caused rumors about their relationship.

Even though her net worth hasn’t been confirmed, it is clear that the actress earned a good fortune. She acted since 2012, appearing on the big projects. That’s why her net worth is no less $2 million.

The actress enjoys watching series from Netflix and prefers passive recreation to physical exercises, which she hates. Jenna is a dog lover. She owns two dogs. Her fashion icons are Beyonce, Selena Gomez, and Angelina Jolie.

Besides her acting works, she appeared on the number of TV commercials among them Burger King and Fruity Pebbles.

The actress is active on social media. She has got accounts on Twitter as well as Instagram. On the former platform, she gathered more than 3,3 million subscribers.

The actress has got formed a social position. She stands for the acceptance of the LGBT community as well as immigration. She actively collaborated with charity funds and appeared on numerous charity concerts. Besides, she is an Ambassador of UNAIDS and contributing to getting rid of the stigma attached to HIV/AIDS and to raise awareness. She told, “Many people don’t know this, but girls ages 15-24 (my age!) are currently the highest group newly infected with the disease. I want to be part of the solution and hep spread awareness to prevent the spread of the disease”.