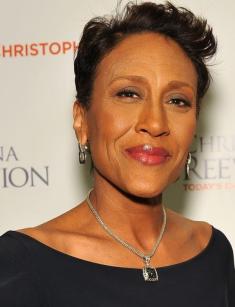 She is a professional journalist. Robin achieved height in her profession, thanks to her intelligence and hard work. Besides her broadcasting career, she made an impressive sports career playing basketball at college. Besides, she went public with a rare decease and inspired many people to struggle with a rare syndrome.

At school, she was good at tennis and basketball. Robin also was one of the most intelligent students. She graduated from the school with the title of salutatorian. As a promising athlete, Robin was offered an athletic scholarship to play basketball in a college. The news anchor mentioned she visited the college, but it seemed to her too impersonal and big. She occasionally attended Southeastern Louisiana University and decided to enroll. Her college athletic career is impressive. She was a standout performer on the basketball team. As a third all-time leading scorer and rebounder, Robin received her jersey on the ceremony in her honor.

In 1983 she began her broadcasting career on the local channel. In the 80s, she worked as a reporter, sports anchor, and radio host. In 1990 she received a significant promotion. From 1990 to 2005, she worked as a sportscaster on ESPN. Then she continued her career on ABC as a reporter for "GMA." For her prosperous career, Robin made numerous reports and took the number of interviews. In 2005 she anchored several emotional stories from Gulf Coast when it was devastated by the hurricane. In 2012 the journalist interviewed Barack Obama.

In 2018 she was a co0anchor of the wedding Meghan Markle and Prince Harry. In 2017 she became a founder of a production company that creates broadcast and digital programming. Her career is also very successful from the financial point of view. Her annual contract with the channel brought her about $15 million as a salary. Het net worth is estimated at $35 million. In 2020 the reporter had an anniversary with ABC and Disney. She had collaborated with the channel for 30 years. In 2020 she produced the movie “Stolen By My Mother.”

For the last decade, the broadcaster came across significant health problems. In 2007 the reporter learned her diagnose – the early stage of breast cancer. Robin underwent surgery and passed radiation therapy. The treatment had passed effectively and gave its results. However, in 2012 Robin had a new diagnose, a rare decease of the bone marrow, known as myelodysplastic syndrome. The news anchor went public with her illness to attract people's attention to the Donor Program. In October 2012, she left the morning show and focused on her treatment. Fortunately, her treatment passed well. She got a bone marrow transplant. In 2013 she was able to return on the morning show.

During her treatment, Robin created a public service campaign. She inspired people to register for the program. Moreover, many people learned a need for donors. For Robin's contribution to society, she received several honorable awards. In 2013 she received the Arthur Ashe Courage Award. She also took the Peabody Award. Robin’s sister was her donor.

The news anchor practices transcendental meditation. She is Presbyterian. In 2005 she began a same-sex relationship with the massage therapist, Amber Laign. She didn't cover her romantic relationship with relatives, friends, and colleagues even though she acknowledged her sexual orientation only in 2013. In January 2014, her girlfriend visited the morning show. The reporter said,"Any my year-end post was just full of gratitude and telling everyone all that I'm grateful for, including my girlfriend Amber, who really loved me through a very difficult year," she continued. "I'm very happy for the support." In 2014 she also announced that the couple was going to marry. They tied the knots at a modest wedding with the closest people. In 2020 at the age of 61, Robin peacefully resides with her wife, who is 14 years younger.

Robin proved to be a skilled writer. The journalist released three books, where she shared her life experience. Her first book was published in 2007. She is active on social networks. Thus Robin frequently shared her pics on Instagram.