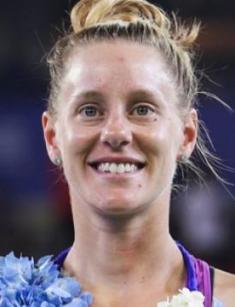 In July 2019, the American tennis player Alison Riske failed to surpass her starry opponent Serena Williams in the quarterfinals of Wimbledon and remained number 37 in the Women’s Tennis Association ratings. Still, the athlete has won many prestigious competitions on grass and hard; when she defeated Kiki Bertens at the Rosmalen Grass Court Championships, she gained $250 000 and the second title of the WTA winner.

The future champion was born in Pittsburgh on July 3, 1990, into the family of a school teacher and secret agent promoted to an FBI investigator. The father often played tennis with his kids: Alison, Sarah, and Dan. Little Alison tried herself in this sport at the age of three – she did it just for fun, hanging out with her relatives.

Gradually, the girl absorbed in this activity and joined a member of a children’s team when she was a school student. The young talent helped her group reach the victory at the amateurish competitions.

In 2007, Riske won the USTA National Collegiate Clay Court (a free American tournament) in singles and got qualified for the youth Grand Slam in New York National Tennis Center. The debiting match brought the victory over the Romanian athlete Sorana Cîrstea, but the loss to the compatriot Julie Ditty did not give Alison the chance to participate in the next round.

The first failure did not have a negative influence on the young woman’s career. She won the ITA Summer Claycourt soon and took the second place at the USTA National Hardcourts.

As long as Riske took a preparation course at Van der Meer Tennis Academy, she mastered her skills with the coach Janice Irwin and Yves Boulais, the husband of the Wimbledon winner Patricia Hy-Boulais. The training paid off: Alison topped the rating of 18-year-old athletes and joined the professional team at the United States Fed Cup.

In 2010, the player debuted in the WTA premier competitions; it took place in Charleston in April. Although she lost to the German colleague Angelique Kerber in the first match, Alison reached the semi-final in Rancho Mirage.

The quarterfinal in Birmingham followed; Riske also won the competition and gained $50 0000. In 2013, she reached the semi-final at the Birmingham tournament. In summer, the athlete won her first long-awaited game at the Grand Slam tournaments; all in all, her performance was successful, and she left the event in the third round.

The 23-year-old athlete was included in the top 100 tennis players and showed splendid results at the US Open. She surpassed several strong opponents at the early stages and made it to the fourth round after the ex-champion of Wimbledon Petra Kvitová.

2015 started with the Fed Cup; Alison won the debuting WTA title in Tianjin. The chain of victories continued: in February, the athlete defeated the Swiss player Belinda Bencic in both sets.

In the 2015-2016 season, the woman regularly participated in semi-finals and finals all over the world; she stood against Karolína Plíšková, Agnieszka Radwańska, and Svetlana Kuznetsova. The next year, Riske went to the third round of the Australian Open and reached the 36th position in the world’s rating.

The end of 2018 brought some misfortune: Alison lost to the Chinese athlete Wang Yafan in the third round of Australian Open, and Kateřina Siniaková defeated her in the final of the Fed Cup.

Alison does not often give interviews; most of them occur after big victories and pertain to career achievements, prizes, and titles. Thus, there is little information about her personal life.

Judging by some Instagram publications, Riske likes to entertain; she shares photos in a swimsuit sometimes. There has been no hint about a boyfriend, but the news about the athlete’s wedding came in in 2019. Just before another Wimbledon tournament, the media reported Alison’s marriage to the coach Stephen Amritraj, who had been working with her for several years. This man has remained in the shadows for a long time, and fans are looking forward to new details.

In 2019, Riske recovered from the past failures and reached the final of Shenzhen Open. Following the semi-final game against Veronika Kudermetova and the final against Kiki Bertens, the American player became the WTA champion at Hertogenbosch and headed to Wimbledon again.

The quarterfinal match was not lucky: Riske gave in to Serena Williams. However, her previous victories were impressive: she crashed Donna Vekić (Croatia), Ivana Jorović (Serbia), Belinda Bencic (Switzerland), and Ashleigh Barty (Australia). After the even, Riske told journalists she needed some rest; fans hope to see their favorite soon.