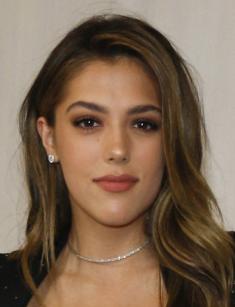 Sistine Stallone is a popular model and actress. Her surname tells us that she is the daughter of the famous actor Sylvester Stallone. Sistine started her career as a model and then appeared in several acting roles, which brought her to fame.

Sistine Stallone was born in Los Angeles, California, the U.S. Her parents are successful people: Oscar-nominated actor Sylvester Stallone and her mother, Jennifer Flavin, is a former model.

Speaking of her education, she studied at the University of Southern California and finished it in 2018. After getting a degree, Sistine chose the career of a model.

Sistine signed her first contract to IMG Models in 2016. She was offered to make her first appearance at a fashion show for Chanel. After that, she appeared in a July 2016 issue of Glamour and was featured on the cover of Elle Russia for November 2017. Sistine and her sisters stepped into the spotlight in 2017 when they served as Miss Golden Globe.

Sistine along with the actress Corinne Foxx made their film debuts in the movie 47 Meters Down: Uncaged. Before starring in it, Foxx was featured in music videos and TV episodes, and Stallone was a model. The plot follows scuba diving women who are trapped by a group of sharks. In the movie, Sistine and Fox play sisters. The director of the movie is Johannes Roberts. When he was asked about the cast, he said that he wanted to make a new adventure, that is why he decided to take fresh actresses who had no baggage from previous acting roles. From his point of view, it really helped to have fantastic energy amongst them that worked in the movie. He was amazed by Sistine's playing and decided to give the role.

In Autumn, 2019, the actress appeared with her dad and mother during the 72nd annual Cannes Film Festival. Sistine was wearing a gorgeous ivory sequined gown. In May, she also stole some attention from her famous father during a career celebration at Cannes that included a screening of Rambo: First Blood (1982) and a preview for the upcoming Rambo V: Last Blood. The model wore a long-sleeved, low-cut gold dress.

Speaking of the private life of the actress, she tries to keep it far from the media. As her father is her best friend, he always tries to give her a bit of good advice when she is dating a boyfriend. Of course, most young boys dream of meeting a hero like Stallone. But her dad is strict in these questions and often trolls her friends who may be her future boyfriends in the future. Sylvester has one method that he applies when he first meets Sistine's friend: he does crushing the hand test. He works his hands very much and watches the reaction of the person. Sistine's father is always great support for her in life. When she was starting a career as an actress, she warned her about all the difficulties in this business. Sylvester told her that she couldn’t go in halfway and that she had to work hard and be ready for many challenges.

In January, 2018, the model was spotted with Bella Thorne's ex-boyfriend Gregg Sulkin. The two were holding hands for a lunch date in LA. It seemed that they took a romantic stroll through the upscale residential neighborhood. As for now, there is no information about her present relationship. The model is known to be single.

Sylvester is a caring father to his children. A recent Instagram picture posted by the actor showed that despite his fierce personality in movies, he is a loving father. On Sistine's 21st birthday, he turned hairdresser for his daughter and admitted that he was the "world’s worst hairdresser." He wrote, "Every day should be a celebration" to congratulate his daughter on her birthday.

Sistine is also an active user of Instagram. She has over 1,2 million followers.

The net worth is estimated at $1 million approximately. She earns money from her modeling career, acting roles, and endorsement deals.