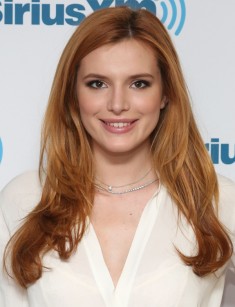 Bella Thorne is an American singer, model, and actress who appeared in Disney channel projects: Shake It Up, Wizards of Waverly Place, and Frenemies.

Bella was born in a small town Pembroke Pines, Florida. She was the fourth and the youngest child in the family of Tamara and Delancey Reinaldo Thorne. She has an elder brother Remy and two sisters, Dani and Kaili. All of them are engaged in modeling and acting.

In 2007, the father died in a traffic accident. This tragedy influenced the young woman’s life immensely: even when she grew up, she refused to learn how to drive and get a driving license.

The future star began her modeling career at six months: the girl’s mother who worked as a professional photographer sent the pictures of her daughter to a publishing house. Eventually, Parents Magazine published Bella’s photo on its catalog cover. Later, the girl shot for printed editions, magazine covers, and ads. The young model collaborated with Lasenza Girl, Tommy Hilfiger, Target Corporation; she also advertised ALDO KIDS shoes, Barbie dolls, and other JLO products for children (Jennifer Lopez is the owner of the company).

As Bella grew up, she decided to try herself as an actress and moved to California. To reach her goal, she began to frequent auditions.

When the woman was already popular, she turned over a new leaf in her career and proved to be a successful singer. In 2012, she presented a mini-album Made in Japan with the American singer Zendaya Coleman; it was the soundtrack for the teen movie Shake It Up. In 2014, Bella recorded the song “Call It Whatever” that reached number ten in Billboard Dance Club Songs. Later, this track was included in the album Jersey which came out six months later.

In 2003, Bella Thorne debuted in a feature movie: it was the comedy Stuck on You. The actress played a small fan, a member of the cheerleading team. Later on, the girl appeared in episodes of children’s and teen projects, for instance, the series The O.C. where she personified one of the main characters, Taylor Townsend, in her childhood.

The significant work started in 2010 when the artist moved to Hollywood. The 78-episode teen music movie Shake It Up broadcast by Disney until 2013 was the first project. Bella Thorne and her young colleague Zendaya played 13-year-old friends who dreamed of entering the world of show business. When their dream comes true, life gives the girls challenges that threaten their careers and even friendship.

Bella Thorne could not dance. She took up acting classes and worked with a professional choreographer for three hours every day. The actress remembered the director asked her to play herself – basically, it was the story about Bella. When Thorne received the role, the changes in the plot were introduced: the actress’s character had dyslexia, just like Bella.

The new offer – a role in the youth comedy Frenemies based on Alexa Young’s novel – proved the young actress’s recognition. The movie shows two girls who have a fashion blog and share stories from their lives.

In 2015, MTV launched the youth horror series Scream, the adaptation of the horror movie series under the same title. Bella Thorne was offered one of the lead roles, but she chose another character, Nina Patterson, because Drew Barrymore had played this role in the original, and Bella wanted to reconstruct that episode. Besides, the actress noticed that she had never played a dying character, and it was a valuable experience for her.

At 15, Bella Thorne dated her peer Tristan Klier; they broke up in 2015. Soon, Bella had a romance with the actor Gregg Sulkin.

The actress was seeing the rapper Lil Peep for a while. In 2017, when she learned the man died, she was on the edge of a nervous breakdown. The woman gave loose to her emotions and wrote on Twitter and Instagram how unjust the world was; she used strong language. According to Bella, the musician deserved a better and happier life.

Bella Thorne is a philanthropist and pays much attention to charity. She supports the Nomad organization that provides deprived African children with education, nutrition, and medical care. Besides, the actress is a patron of a Kenyan girl, Lydia Kanini Kiio, who lives in Kibwezi: she pays for everything this child needs.

Bella likes outdoor activities; she spends a lot of time in a swimming pool and a dance hall. The actress is fond of painting and loves animals. She has frogs, turtles, six cats, an English Cocker Spaniel, and a wolf-husky mix Voodoo.

2017 brought the actress many bright lead roles. It was, perhaps, the series Scream that contributed to the artist’s popularity.

Today, Thorne is the actress of horrors and thrillers while youth comedies that had made her famous are secondary. However, thanks to her fragility (the woman’s height is 173 cm.), Bella continues to play teenagers: her “eternal youth” encourages skeptics to talk about the surgery that she presumably had as a teen. The actress makes no comments on these rumors.

In May 2017, Thorne played the main character in the horror Keep Watching. The movie tells the story of a family locked in their own house by maniacs who begin the deadly game.

In spring 2017, Thorne also got the lead role of Paige Townsen in the melodramatic series Famous in Love. It is the story of a college student who appeared in a Hollywood blockbuster and became a star. Thus, the young woman has to deal with the paparazzi regularly; she cannot be sure who really wants to communicate with her and who wants nothing but her sudden popularity. In August, the second season of the series was announced.

Summer 2017 was also marked with two lead roles in movies. In the thriller You Get Me, the actress played Holly who fell in love madly. She spends a night with a young man. It was a mistake for him; the next day, he makes it up with his girlfriend. However, it was the turning point for Holly. She gets transferred to the school that the object of her passion attends; she is not ready to let him go.

In the thriller Amityville: The Awakening, Bella Thorne played the main character, Belle. This movie is a reboot version of the 1979 movie under the same title. Thorne’s character moves to a new house with her family: a single mother, a sister, and a brother who is in a coma. Soon, the boy recovers miraculously, but the further horrible events give no chance to enjoy the recovery.

In October 2017, the actress appeared in the comedy horror The Babysitter. At night, the pretty, sweet babysitter turns into a cold-blooded murderer and even a devil’s handmaiden.

2018 was marked with two more exciting projects. The drama The Death and Life of John F. Donovan tells the story of movie stars’ correspondence and the influence their letter had on their lives. It is Xavier Dolan’s debuting work in English. Kit Harington, Jessica Chastain, and Natalie Portman starred in this movie.

In the melodrama Midnight Sun, Bella’s character is a 17-year-old girl who has an extreme sensitivity to sunlight; for this reason, she can go out and live a full life only at night. Katie remains a bright, creative person, but her condition becomes a problem when it comes to interaction with people and falling in love. 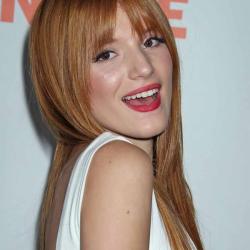