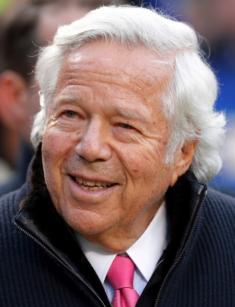 Robert was born on June 5, 1941, in Brookline, Massachusetts, the United States to the family of Sarah Bryna (Webber) and Harry Kraft. His mother was from Halifax, Nova Scotia, Canada. His father worked as a lay leader at Congregation Kehillath Israel in Brookline and wanted Robert to become a rabbi. Their family was Jewish and very conservative.

Robert passed his childhood in Brookline – there he studied at the Edward Devotion School, later – at Brookline High School from which he graduated in 1959. As a child, he wanted to do sport but couldn’t do it – his parents made him study Hebrew and observe the Sabbath. So, the boy didn’t have time for hobbies.

When it came to choosing a university to study at, Kraft entered Columbia University. There he was unanimously selected as a class president. Being a student, he was a member of Zeta Beta Tau Fraternity and joined university football teams – he performed on running back and safety positions. Studying at the university, Robert met his future wife, Mary Hiatt. The next year, in June 1963, the couple married, and Kraft graduated. In 1965 he got an MBA from Harvard Business School.

27-year-old Robert applied for the Newton Democratic City Committees position and won the election. Also, he planned to nominate himself against Massachusetts's 3rd congressional district Representative Philip J. Philbin in 1970 but denied the idea. He understood it would take much time. When his friend State Representative H. James Shea, Jr. committed suicide, he realized he would never enter politics.

Initially, Robert Kraft worked for the RAND-Whitney Group, a Worcester-based packaging company run by his father-in-law Jacob Hiatt. In 1968 he bought the company's share and gained control of its processes. Now he is currently working as its chairman.

In 1972 Kraft run his own business – founded International Forest Products, a trader of physical paper commodities. The two companies collaborated and now are considered to be the largest privately held paper and packaging companies in the United States.

In several years Robert managed to develop his business hugely. So, in 1997 it was included in a top 100 US exporter/importer. In 2013 the company got the 20th place on the Journal of Commerce's list in that category. Initially, the variety of products International Forest Products could generate was scarce, but the management has always strived to increase it. Eventually, Kraft formed the Kraft Group.

But he is famous not only for the company. Besides, Kraft is an investor of big projects. So, in 1982 he invested money to New England Television Corp and got the title of a director of the board, later – of a president of the corporation. In 1991 Robert sold his share for $25 million.

Robert Kraft is an owner of several sports clubs. So, in 1974 he alongside five colleagues bought the Boston Lobsters of World Team Tennis (WTT). This new management wanted to make them champions, purchased the best players, including Martina Navratilova. They succeeded – the club became one of the best teams in WTT. Unfortunately, in 1978 the franchise closed.

Later, Kraft took part in bidding for the Boston Red Sox and the Boston Celtics.

Robert Kraft was a big fan of the New England Patriots. In 1985 he purchased a 10-year option on Foxboro Raceway, a horse track adjacent to the Stadium where the club trained. That time its owner Sullivan went through financial problems and had to sell the share in 1988. The Sullivan Stadium became bankrupt.

There were many desiring people to own the Stadium, but Kraft managed to outbid the opposers. So, he paid $22 million for the Stadium. The club itself was sold to James Orthwein. The gossips appeared that he wanted to move the team to St. Louis. In 1974 Orthwein proposed Kraft to buy out the remainder of the team's lease. However, he denied.

Twenty years later, Orthwein lost the interest to the club and decided to sell it. According to the rules, every potential buyer had to refer to Kraft. So, he proposed Orthwein $172 million for the team, and he agreed. By the way, for that time it was the highest price had ever been given for NFL teams. In his future admissions, Kraft said the process of buying the team was like gambling for him. He said he kept the team's winning tour among his souvenirs as a reminder about his dream to become a Patriots owner.

In 1998 Kraft thought about moving the team to Hartford, Connecticut. The contract was almost signed when he changed his mind and decided to build a new stadium in Foxboro instead.

In 2002 the process started – a new stadium was financed by Kraft – he invested $350 million. Initially, it was named CMGI Field, later - Gillette Stadium. In 2007 Kraft began to develop the land around Gillette Stadium, created an open-air shopping and entertainment center called Patriot Place. The development included "The Hall at Patriot Place presented by Raytheon," a multi-story museum and hall of fame attached to the Stadium, and the "CBS Scene," a CBS-themed restaurant

When Robert became the team's new management, they went through prosperous times. So, they got to the play-off for 18 times in 23 years, won AFC East titles for 19 times, won the Super Bowl for six times. Once, when the team won the competition, its player Tom Brady kissed Kraft on a mouth.

In 1996 Robert became a founder of the New England Revolution, a charter member of Major League Soccer. Also, he was an owner of the San Jose Clash from 1998 to 2000.

In 2005 Kraft planned to invest to the Chief Executive of English Premier League team Liverpool. However, the club's owners became George Gillett and Tom Hicks. Today it is ruled by Fenway Sports Group.

In April 2018 Kraft visited jailed rapper Meek Mill in Pennsylvania state prison and was disappointed in the American justice system. The musician was accused of violating his probation. Though the businessman tried to help him go to freedom by direct speech to Donald Trump, he failed. A judge said his drug use, drinking while riding arrests and other issues while under supervision merited the jail time.

Kraft's current net worth is evaluated at $6,6 billion.

During his career, Kraft has always done charity work. So, totally, he invested more than $100 million for education, prosperity of women and children, healthcare, youth sport and the relationship between America and Israel. In terms of education, he supported financially Columbia University, Harvard Business School, Brandeis University, The College of the Holy Cross, Boston College, Tufts University, the Belmont Hill School, the Boys & Girls Clubs of Boston, and the Dana Farber Cancer Institute in Boston. In honor of generous investor, the playing field at Columbia's Lawrence A. Wien Stadium at the Baker Field Athletics Complex was named Robert K. Kraft Field.

Robert has always strived to build a relationship between the United States and Israel. So, he created Kraft Family Stadium in Jerusalem and the Kraft Family Israel Football League.

Robert Kraft was married for years to Myra Kraft. However, his first and only wife is deceased, and, by all accounts, her early death left Kraft heartbroken. Robert Kraft does have a girlfriend named Ricki Noel Lander. That relationship appears to be complicated, though.

Robert met his future wife as a student. They tied a knot in June 1963. The couple had four children, Jonathan A. Kraft, Daniel A. Kraft, Joshua Kraft, and David Kraft. Myra died from ovarian cancer on July 20, 2011, aged 68.

Her father was Jacob Hiatt, a Massachusetts businessman who emigrated from Lithuania in 1935. His parents, sisters, and brother remained behind and perished in the Holocaust.

The news about the death of Kraft's loved wife made him absolutely heartbroken. He said he didn’t expect such a cruel destiny. She weighed 98 pounds, she read four books a week, she ate healthily and exercised every day. They planned that she was going to outlive him by 30 years. Robert started drinking and almost had a stroke because of the tragedy.

The woman was a really benevolent person – she was extremely involved in charitable efforts, including the family foundation. Myra was on the board of various groups and “she managed the Robert and Myra Kraft Family Foundation and was president of the New England Patriots Charitable Foundation.”

Myra and Robert succeeded to bring up decent children. Robert and Myra Kraft each came from families that taught and practiced the principles of philanthropy. Fifty years ago, they began their mission of philanthropy and taught their children the importance and value of giving back. Today, with more than $400 million in donations from the Kraft family and their foundations, the power of philanthropy has been felt by youth and families around the world by assisting programs that foster cultural diversity, education, family and health.

Since his wife died, Robert Kraft has basically been linked to only one woman. However, Robert Kraft’s love life is complicated. In fact, it’s so complicated that his girlfriend named Ricki Noel Lander had a baby and Kraft denied that the child was his. The scandal became a subject of people's heated debate.

The couple had dated for five years and remained together. Ricki Lander is 39 years younger than Robert Kraft.

Over the years, there have been reports that the couple broke up, supposedly because Kraft didn’t want to get married again, although that was never proven.

Lander is a dancer, model, and actress.