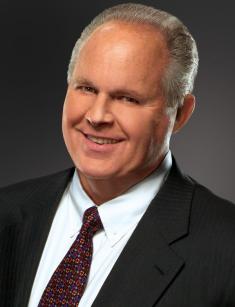 He is an outstanding broadcaster and widely recognized radio personality. Rush made one of the most successful careers on the radio as a conservative radio host.

He was born in a prominent family in 1951. His grandfather had chosen the name “Rush” to honor the maiden name, who was a part of a family. His ancestors were German. Rush wasn’t the only child in his family. His parents also raised his younger brother David. His family includes many lawyers and politicians. His father was a military pilot and a prosecutor, and his grandfather was a lawyer too. Rush’s uncle worked as a judge, as well as his cousin. Rush’s father had much influence on him. All his life, Rush tried to gain his father’s respect and approval. His younger brother became a prominent political figure.

Rush took his first job at the local radio station at the age of 16. That time the young man found the main interest of his life and didn’t want to focus on somebody else. However, he followed his parents’ recommendations and entered college, but not for long. Having little interest in academic studying, Rush was dropped out due to low educational achievements.

At the age of 20, Rush found a job on the radio station working in the afternoon and morning shows. The work of the young radio host was spotted by a general manager of the station who compared his with young Imus. Nevertheless, due to conflicts, he was fired in 1973. Soon he took a job on the other station but early was dismissed. The general manager told him that he had nothing to do on the radio and would never achieve success. After dismissal, he returned to live with his parents and took hiatus.

In 1975 he returned to work as a host of a talk show. Rush had disagreements with the management again as a result was fired. That was a tough time for Rush as he had become disillusioned with that job and felt pressure to find another profession. He began working part-time in group sales in a baseball team. That experience allowed him to find life-long friend George Brett, a baseman.

In 1983 he tried to get success as a radio host again. Rush refused from monikers and broadcasted with his real name. Soon he was fired, but a week later, the host found a job on the other station. By that time, Rush had gained significant experience and was able to talk about more controversial issues. Gradually he had formed his unique style.

In 1988 he finally found his flagship radio station – WABC, where he hosted a new show. Two years later, his audience had significantly grown, and his program had become the most popular in the country.

His conservative talk show was one of the first programs of such a format. That had made Rush incredibly famous and pretty wealthy. In the 2000s, the show remained a top radio program with millions of listeners. Thus, in 2015 his weekly audience was 23 million listeners. In 2008 the host signed the contract with Clear Channel Communication to continue his radio show on its network. The 8-year-contract’s worth was $400,000. Since the 80s, Rush has been one of the highest-paid celebrities. It is not a big surprise that his net worth is estimated at $500 million.

From 1992 to 1996 he has a half-hour show on the television screen. Initially, the show included many typical Rush’s issues. Even though the show had lasted for four years, the broadcaster confessed that he enjoyed working on the radio much more. Besides his T.V. show, Rush made several guest appearances.

The broadcaster was widely recognized as an outstanding host and prominent voice of conservative movement in the USA. President Reagan expressed his appreciation to Rush for the promotion Republican principle via media. The host gained several awards as an outstanding radio personality.

Rush actively collaborates with charitable organizations. He regularly contributed an impressive sum of money to the largest volunteer organizations. In 2019 his show introduced a T-shirt, “Stand up for Betsy Ross,” which collected more than $5 million.

In the 2000s, the radio host confessed that he had a severe health issue. Rush was almost deaf but continued his show. In 2001 the host had an implant, which helped him to continue working. In 2003 he claimed his addiction to pain medication. He was arrested and charged with prescription fraud.

Since the 90s, the host had a passion for cigar. During his work on TV, Rush wore distinctive ties. Later he launched a series of ties which were designed his wife. On the 4th of February, the host made an announcement about his illness – advanced lung cancer. One day after, he was invited to Trump’s state of the union address, where he received the presidential medal of freedom.

As to his views, Rush is a supporter of the American exceptionalism. He widely criticized politicians rejecting this notion. Once, he compared the support of abortion with Nazism. He is also known for his controversial statements concerning African-Americans. He called homosexual sexual relationships unhygienic.

Sometimes his statements were very controversial and even rude. Thus in 2006, he gave his comments about Michael J. Fox, who appeared in a political advertisement. As it is known, the prominent actor has Parkinson’s disease. The host named his appearance on the ad “shameless,” and his illness too exaggerated. Later the host publicly apologized.

The broadcaster was married four times. At the age of 26, he tied the knots for the first time, in 1980 his then-wife Roxy filed for divorce due to incompatibility. In 1983 he married a college student, but the couple split several years later. In 1994 he married an aerobics instructor Marta Fitzgerald again. In 2000 the couple separated. The fourth marriage happened in 2010. As a host of the wedding ceremony Elton John entertained guests for $1 million fees, as it was reported.

Rush is proved to be a skilled author. He released seven works,including children books, most of them had become bestsellers.