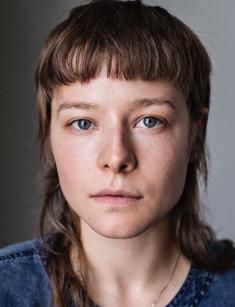 Emma Zia D'Arcy is an English-born actress and producer whose birthdate is June 27, 1992. Emma is better known for starring in such projects as HBO's House of the Dragon, Wanderlust, and Truth Seekers. She is of British nationality and belongs to a mixed ethnicity.

She studied at the Ruskin School of Art and then at Oxford University.

Emma was born in London, England, to an ordinary English family. Her mother is Sally Elizabeth D'Arcy, and her father is Richard John D'Arcy. She was raised along with her brother, whose name is Lou. Emma attended an art school in London and then enrolled at Oxford University, where she also studied art. After successfully graduating, Emma started her acting career.

The Pillowman at the Oxford Playhouse, Romeo and Juliet at the Southwark Playhouse, The Games We Played at Theatre503, Against at the Almeida Theatre, A Girl in School Uniform (Walks into a Bar) at the West Yorkshire Playhouse, Mrs. Dalloway at the Arcola Theatre, and The Crucible at the Yard Theatre are just a few of the plays Emma has appeared in.

Emma has starred in several television shows, such as Nick Payne's Wanderlust from 2018 on BBC One and Netflix and Nick Frost's comedy-horror series Truth Seekers from 2020 on Amazon Prime Video. She plays Rhaenyra Targaryen in the HBO adaptation of Game of Thrones, House of the Dragon, which premieres in 2022.

Emma starred in the Philippa Lowthorpe-directed comedy-drama Misbehaviour in 2020 and the Eva Husson-directed Mothering Sunday in 2021. She joins the cast of the 2022 movie Anna, which is based on the true story of slain Russian journalist Anna Politkovskaya.

Emma identifies herself as a non-binary personality and prefers to use they/them pronouns instead of she/her. She has quite an attractive appearance, which by the way, may be confused with another celebrity. She literally looks like Hunter Schafer, a transgender actress, and model who became popular thanks to starring in HBO's Euphoria along with Zendaya, Sydney Sweeney, and Angus Cloud. But Emma has never appeared in Euphoria, and Hunter has never been in the House of the Dragon.

She has no lovers and has never been officially involved in relationships with men or women. She has many social media accounts and often posts her lifestyle posts on Instagram. On this platform, Emma has over 425k followers. One of her hobbies is taking various photos and sharing them with her fans on social media.

In 2017, Emma appeared in Little Cub's music video for the song "Too Much Love."