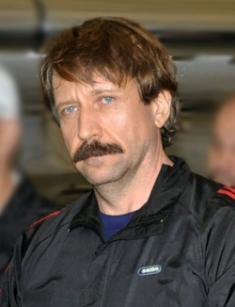 Viktor Anatolyevich Bout who was born on January 13, 1967 is a Russian arms dealer. Nicknamed "Merchant of Death" and "Sanctions Buster", he became infamous for supplying weapons to rebels in Africa and the Middle East.

The gun runner was born in Dushanbe, Tajikistan (formerly Tajik Soviet Socialist Republic). An ethnic Ukrainian, he got Russian citizenship after the Soviet Union collapsed. Viktor's mother's name is Raisa. He also has a stepfather and a brother named Sergei.

Viktor received his higher education at the Military Institute of Foreign Languages and initially worked as a military translator. He reached the rank of First Lieutenant in the Air Force, but abandoned his military career to pursue arms dealing. Viktor took advantage of the dissolution of the USSR and used planes left on the airfields to transport weapons to African countries. Having served in Angola during his career as a military translator, Bout also briefly lived in South Africa, and had the necessary knowledge to conduct arms deals with his African clients.

During his career as a gun dealer, Viktor has been involved in the First Liberian Civil War and the Yugoslav Wars. Middle Eastern news outlets also claimed he traded with al-Qaeda and the Taliban during the war in Afghanistan.

In 2002, Bout had to flee Belgium, where he resided, after local authorities issued an arrest warrant for him. Interpol also issued the highest notice for Bout on charges of money laundering.

In 2004, Viktor's assets in the US were frozen, but the American government didn't have a criminal case against him at the time. Four years later, US agents came up with a sting operation plan. They posed as Colombian rebels who were interested in purchasing weapons from Bout. The gun runner was arrested in Thailand and spent two years in jail in Bangkok before being extradited to the US.

Once on American soil, he was charged with multiple crimes. They included conspiracy to provide material support or resources to a designated foreign terrorist organization, illegal purchase of aircraft, wire fraud, and money laundering. In April 2012, Viktor received a sentence of 25 years of imprisonment. His accomplice, Andrew Smulian, was sentenced to 5 years.

In December 2022, the notorious arms trafficker made news headlines when it was reported that he was exchanged for WNBA player Brittney Griner and is currently on his way back to Russia. After arriving in Moscow, Bout praised Vladimir Putin and expressed his support for the war in Ukraine, saying that he wished he could join the Russian soldiers on the battlefield.

In 1992, Bout married Alla Protasova. The arms dealer also has a daughter, Elizaveta. She was born in 1994. Viktor's wife continued their relationship after his imprisonment and has always been a vocal proponent of his release. Alla and Bout's mother were among the people who met Viktor at the airport when he returned to Russia.