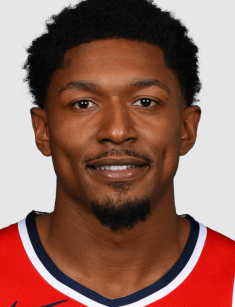 Bradley Beal is an American NBA star. He plays as a shooting guard for the Washington Wizards of the National Basketball Association.

His mom's name is Besta. His dad's name is Bob. Bradley has four brothers. All of them are good at football. Some fans believe Brea Beal is his sister or cousin. In fact, they're just namesakes.

When Bradley was a young kid, the well-known rapper Nelly used to walk him to school. When Beal was a teen, he would sometimes babysit Jayson Tatum, who grew up to become another prominent basketball player.

In college, Bradley focused on medicine. He confesses he's a nerd. Some fans refuse to believe it, judging by his emotional face and stylish braids.

In 2010, this guy took part in the World Championship for aspiring sportsmen aged 16 and younger. The next year, he obtained the status of the most promising high-school basketball star in his home state. He enrolled in the University of Florida where he benefited from an athletic scholarship.

Bradley joined this team in 2012. He proved to be an incredibly talented rookie. In 2014, he began to experience a series of health issues that lasted for two years. First, he had a wrist injury. Then, he damaged his toe and leg.

In 2016, his fans finally heard the good news: Beal re-signed with the Wizards. In three years, he prolonged his contract with this team. He was supposed to receive a maximum of a whopping $72 million.

The next extension took place in 2022. The star could have become a free agent but rejected this option. He remained for 5 more years with the Wizards who promised him a maximum of $251 million.

Bradley always showcases impressive stats. Reportedly, the Los Angeles Lakers would be glad to onboard him. Beal played some of the most adrenaline-fuelled games in his career against Atlanta Hawks, Chicago Bulls and Boston Celtics. John Wall, Kent Bazemore and Ben Simmons are the fellow basketball players that he's most frequently compared to.

This sportsman was expected to perform for the U.S. Olympic team in 2020. The competition was postponed for one year because of the coronavirus pandemic. In 2021, Bradley wasn't able to defend his country's honor because he was diagnosed with COVID-19.

In 2020, Bradley walked down the aisle with Kamiah Adams. Their wedding was private and they had to reschedule it because of the pandemic.

Kamiah is a model, TV personality and social media influencer. She was born in Belgium and spent her early years in California. Her dad is of Puerto Rican and African American descent. Her mom is white.

Beal met his future wife in a bar in 2015. The couple gave birth to three sons.